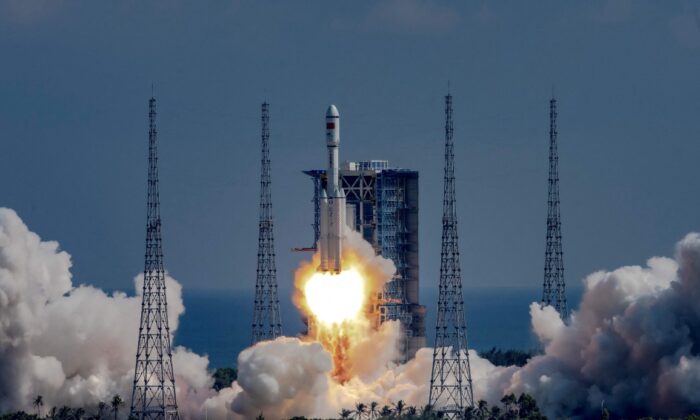 The BeiDou Satellite Navigation System at an exhibition marking the 40th anniversary of China's reform and opening up at the National Museum of China in Beijing on Feb. 27, 2019. (WANG ZHAO/AFP via Getty Images)
Technology

China’s communist regime plans to continue its efforts to win the new space race throughout 2022. Thus far, Beijing is on track to achieve at least 40 space launches during the year, including missions to complete its space station, develop a lunar base, and field new satellites.

The China Aerospace Science and Technology Corp. (CASC), a state-owned contractor responsible for most of China’s space launches, said it will complete the construction of China’s Tiangong space station in 2022, according to state-run news agency Xinhua.

The completion of the outpost will require two more manned space flights, which are scheduled among the launches planned for 2022.

The launches may help to continue the Chinese regime’s efforts to outpace the United States in space development. In 2021, CASC carried out 48 successful launches, playing a significant role in helping China beat out the United States for most launches during the year.

The regime conducted 55 space launches in 2021; the United States, by comparison, had 51, and all the other countries in the world totaled 40.

The news also follows reports that “Beijing-3,” a Chinese optical satellite launched in June 2021, photographed some 1,470 square miles of the San Francisco Bay area in just 42 seconds. The photographs included enough detail to identify individual vehicles. The imagery wasn’t as sharp as the leading U.S. technology, but the satellite can move at as much as three times faster.

The regime also is set to continue its mission to develop a lunar base, the International Lunar Research Station, in cooperation with Russia.

Linked to China’s greater ambition to rewrite the global governance system through a Sino-Marxist lens, China’s efforts to set up shop on the moon have been compared to its efforts in the South China Sea, a disputed waterway where Beijing has continuously attempted to expand its territory through the creation of artificial islands.

Ye Peijian, chief commander of China’s lunar exploration program, compared China’s efforts to establish a manned presence on the moon to the country’s attempts to claim access to international waters.

“If we’re able to go now but don’t go, our descendants will face the same problem in space that we now have regarding the ocean,” he said on Chinese state-owned television. “To safeguard our space rights, we must go.”

Ye then compared the moon and Mars to different contested island chains near Japan and the Philippines, arguing that if China didn’t claim a presence on the moon and Mars immediately, it would lose the opportunity.

The regime has focused enormous resources on dominating space issues in recent years, and outer space is increasingly recognized as a contested strategic domain.

Numerous experts have warned that China’s space program is a direct military threat to the United States and the greater rules-based international order that it leads.

To this end, a top general for the U.S. Space Force said during a panel discussion last month that the Chinese regime is advancing its space capabilities at twice the rate of the United States and would overtake America’s position by 2030 if no changes were made to current efforts to develop space-based technologies.

Another worry is the United States’ dependency on satellites, which it uses for everything from GPS to communications to finance—making it an area that’s vulnerable to attack.

As such, the United States military conducted a series of wargames in December to test the resiliency of its satellite architecture against attacks from China and Russia.

Likewise, legal experts and security analysts have warned that China would likely target the United States’ near-total dependence on space-based technologies as the first part of any potential future conflict.

“Space is America’s greatest asset and its greatest vulnerability,” said Paul Crespo, president of the Center for American Defense Studies, told The Epoch Times last month. “The Chinese and Russians see it as our Achilles heel.”