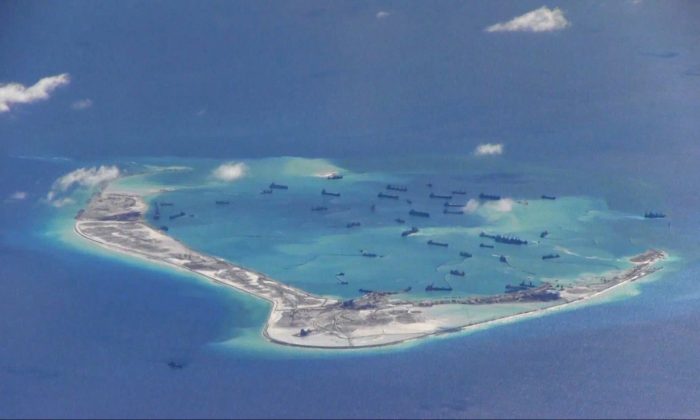 Chinese dredgers work on the construction of artificial islands on and around Michief Reef in the Spratly Islands of the South China Sea on May 2, 2015. (U.S. Navy)
China

The Chinese regime has moved armaments to its man-made islands in the South China Sea, as tensions with neighboring countries and the United States intensify.

The exact type of weapons deployed were not specified in an exclusive report from Australian news agency The Sydney Morning Herald. It states, however, that Australian officials are worried that China will follow up by deploying long-range radar and anti-aircraft batteries.

In the Chinese Communist Party’s newly released military strategy, it shifted the air defense policy of its air force to allow for offensive actions.

The Australian report states that discussions around the weapons deployments “are prompting discussions in senior military circles” that may lead Australia to begin sending its air force to the South China Sea for “freedom of navigation” missions “to demonstrate that Canberra does not accept Beijing’s hardening claims.”

Missions could include fly-throughs, sail-throughs, and similar exercises alongside the forces of other nations.

The discussions in Australia follow a new policy from the United States to directly challenge the Chinese regime’s land-grab in the South China Sea.

The Chinese regime is building artificial islands in the waters close to 1,300 miles from the Chinese mainland. While it has not officially declared a defensive region around the islands, its military has been warning other nations when they pass through.

On May 20, the U.S. military released audio and video of the types of threats the Chinese regime sends. It flew a P8-A Poseidon surveillance aircraft over one of the Chinese man-made islands. A Chinese voice over the radio gives eight warnings, including “You are approaching our military alert zone,” “Leave immediately!,” and “You go!”

The United States made its intentions for the flyover clear. It is to maintain freedom of navigation, and to make clear that the Chinese regime’s construction of new territory in international waters will not be recognized as a legitimate claim to sovereignty over the region.

After the U.S. flyover, the Philippines stated that they too would begin flying military planes over the region. Australia may now follow suit.

The Chinese regime has made clear its ambitions for expansion. Facing this threat, according to Richard Fisher, a senior fellow at the International Assessment and Strategy Center, the United States has a small window of time to act.

“We are entering into a battle of perceptions, and we are attempting to add new layers on the argument that it is China that is the aggressor, the rule breaker, and the real threat to the region,” Fisher said.

He added, however, that unless the United States is willing to put more muscle behind its pushback, “the Chinese are going to continue to ignore us, continue to build more bases, and continue to build control of this region when they have the means to do so.”

The Chinese regime is using a three-pronged strategy as it pushes abroad. It uses military to seize and defend territory, propaganda to justify its actions, and money to rope in business leaders, and politicians to influence foreign policy.

It outlined its ambitions for expansion in the Chinese Military Strategy white paper released on May 26 by the Chinese Ministry of National Defense. The report outlines the Chinese regime’s interests in expanding its global influence, reeling in Taiwan, and expanding military control of the South China Sea and East China Sea.

“This is the chain of events that we should be working on stopping now,” Fisher said.

Fisher noted the Chinese regime has sent between 200 and 300 ships to the South China Sea for the construction of artificial islands for military bases. “In most places that would be considered an invasion,” he said. “The United States should be responding as if China started invading the South China Sea.”

The Chinese regime’s ambitions for military expansion aren’t limited to just the South China Sea. It is currently looking to build military bases elsewhere, including in Djibouti in northeastern Africa, and in Namibia in southwest Africa.

Fisher noted that when the Chinese regime’s military and business ties are taken into account, it could also soon have influence over major trade chokepoints in Central America, South America, the South Atlantic, and in the South China Sea.

“There is a lot more to be done,” Fisher said, in relation to the current U.S. response. “We’re in a period where there is very little time left.”