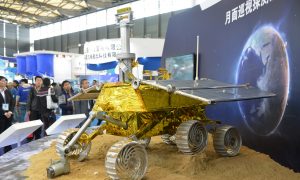 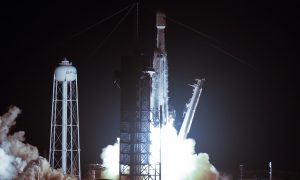 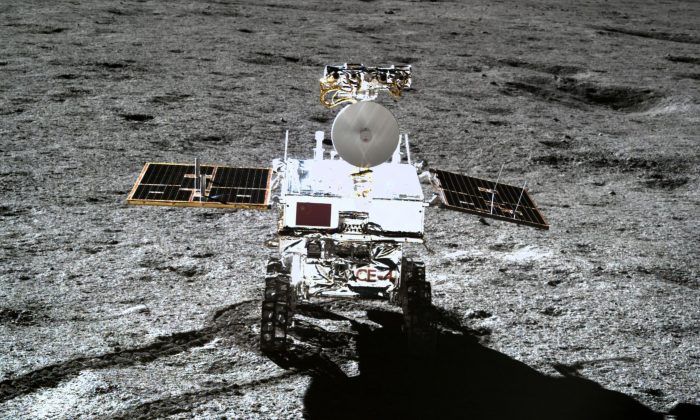 The Yutu-2 moon rover, taken by the Chang'e-4 lunar probe on the far side of the moon. Picture released on Jan. 11, 2019. (China National Space Administration [CNSA] via CNS/AFP/China OUT)
Thinking About China

China Could Win the Next Moon Race

President Donald Trump has committed the United States to returning U.S. astronauts to the moon by 2024, and the U.S. National Aeronautics and Space Administration (NASA) has assembled its Artemis program to do so, to include unprecedented participation by new commercial space service providers.

However, the Democratic Party’s 2020 platform, while supporting the Artemis program, does not endorse the 2024 goal for returning to the moon. It’s worth recalling that as Vice President, Joe Biden watched his boss President Barack Obama in 2010 cancel NASA’s return-to-the-moon Constellation program of his predecessor, George W. Bush.

Recent Chinese revelations indicate that should financial or political pressures prompt the next Administration to delay or cancel the Artemis program, China could “win” this second race to the moon. In doing so, China could reap both the military and economic benefits of controlling choice locations on the moon, and of securing the lead in building a dominant strategic position to exercise control over the “Earth-Moon System.”

Over the last two years, China has been hinting that it has a sophisticated program that might allow it to put its astronauts on the moon by the mid-to-late 2020s. In late October 2018, images began emerging from the Oct. 23, 2018 China Manned Space Conference held in Xi’an, China. These images expanded slightly on a new five-meter diameter manned space launch vehicle (SLV) just revealed two weeks before at the 2018 Zhuhai Airshow. Images also emerged of new lightweight moon landers and possible moon habitats and rovers.

Following these initial revelations, some articles emerged along with much speculation on Chinese military and space issue web pages, but there were no official statements by the Chinese regime or high corporate officials confirming that China was accelerating its manned moon program. Previously, a number of officials had stated that China would not send people to the moon until 2030 or thereafter, as China first had to develop its 10-meter diameter 50-ton to the moon payload Long March-9 heavy SLV.

But this changed on Sept. 18, 2020 when the 2020 China Space Conference in Fuzhou, Fujian Province, was briefed by Zhou Yanfei, a deputy director with the China Manned Space Engineering Office (CMSEO). This office is directly subordinate to the new Armaments Development Department of the Central Military Commission (CMC) of the People’s Liberation Army (PLA). In short, China’s “NASA” is a department of the PLA designed to secure military advantages for China.

Zhou affirmed many of the programs hinted at in 2018, and then some. Regarding the yet unnamed five-meter diameter SLV, dubbed the “921 Rocket” by Chinese space fans, Zhou was reported on Sept. 18 in the Global Times saying, “China is pressing ahead with the research and development of a crewed heavy-lift carrier rocket, whose launch capability would reach 70 tons to the Low Earth orbit (LEO) and 27 tons to the Lunar Transfer orbit (LTO). … The new rocket will be able to carry a manned spaceship and lunar lander into the LTO.” Informal Chinese sources have indicated this new SLV could be tested as early as 2023. By using two 921 Rockets, one for a manned spaceship and one for a moon lander, China could possibly reach the moon well before 2030.

Zhou’s briefing presentation slides revealed that China’s new two-stage, two to six passenger manned space capsule that first flew on May 5, 2020, could be modified with a larger service module and emergency escape rockets on the crew capsule side similar to the U.S. SpaceX Crew Dragon.

But the larger service module means China can transport larger payloads to the moon. The service module would function like the unused 1960s Soviet Lunniy Korabl or “LK” lightweight six-ton moon lander, which would have descended to four kilometers above the moon using a “Blok D” engine, which then detached and crashed into the moon.

Slides from the 2018 conference, and from Zhou Yanfei, affirm that China may be developing two lightweight moon landers that would employ a detachable BlokD-like descent engine. One moon lander concept, seen below, appears to be five to seven tons and would be placed in moon orbit for crew transfer. A second moon lander is only five tons and appears to be suited for repeat use from a Cis-Lunar or moon-orbiting small space station.

Slides from the 2018 conference, and from Zhou Yanfei, also reveal that China will support its astronauts on the moon with a pre-positioned moon habitat that could also be developed into a large mobile moon rover, seen below. This habitat/rover will also use a BlokD-like detachable descent engine and internal engines for the last several kilometers.

The more recent Chinese small space station concept may also allow China to use the moon to support a new presence in the strategic L2 Lagrangian Point—an area beyond the moon with symmetric gravitational properties that can lower the fuel requirements for station keeping. China is developing a series of deep space aimed radar satellites to put in L2 to better find new exoplanets around near or distant stars. Satellites in L2 could also be used to monitor all traffic between the Earth, Moon and Mars.

Would China put weapons on the moon to better defend its stations and satellites at L2, preserve its hold on the new strategic “high ground” and better control the Earth-Moon System? Chances are good that Zhou Yanfei’s team has long been working with the PLA to design military systems for the moon.

If the United States presses ahead to establish the first significant presence on the moon, engaging the most international partners, it may have a better chance of deterring China from militarizing the moon. But if China takes that leadership, its moon program could reflect the military requirements of the PLA to win wars on Earth. China may also be able to establish a “toll booth” to control or influence the access of other nations to the future “Space Economy,” which could enhance prosperity on Earth for future generations. By getting to the moon first, the United States has a much better chance of countering China’s quest for hegemony on Earth and beyond.

Richard D. Fisher, Jr. is a senior fellow with the International Assessment and Strategy Center.