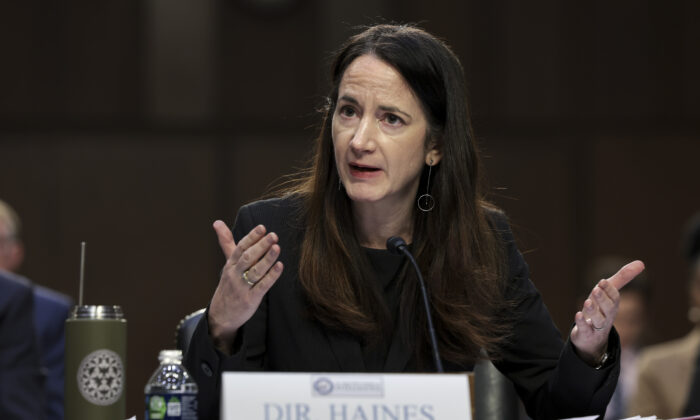 China-Russia Cooperation Will Increase in Coming Years: US Intelligence Director

The partnership between the Chinese Communist Party (CCP) and Vladimir Putin’s regime in Russia is set to deepen in the coming years, according to National Intelligence Director Avril Haines.

“We are seeing them cooperate more and we anticipate that it will strengthen over the coming years,” Haines said during a hearing of the Senate Select Committee on Intelligence on March 10.

Haines added that the partnership between China and Russia extended across economic, political, and military spheres. She clarified, however, that the alliance did not achieve the same sort of cooperation upheld by the United States and its allies, which maintain interoperable forces capable of effectively combining resources in wartime.

The testimony comes a month after Putin and CCP General Secretary Xi Jinping made a declaration announcing a partnership with “no limits,” and two weeks into Russia’s war on Ukraine. Since the invasion, the Chinese regime has consistently refused to denounce Putin’s actions and has reaffirmed its “rock solid” ties with Moscow.

One intelligence report also claimed that CCP leadership knew about Putin’s plans to invade Ukraine in advance and requested Russian leadership postpone the war until the conclusion of the Beijing Olympics.

Observers, meanwhile, have said that Russia’s continuation of the war requires the tacit support of the Chinese communist regime, which has refused to join in the international and multilateral sanctions being leveraged on Russia.

The testimony also follows a similar assessment that Haines delivered to the House Intelligence Committee earlier in the week, wherein she said that China was the leading threat to the United States in 2022.

U.S. lawmakers have warned that China and Russia share a common goal in their desire to undermine the United States’ prominence on the global stage, though intelligence leaders believe that CCP leadership has been “unsettled” by continued Russian failures on the battlefield in Ukraine and the unified Western condemnation of Russian hostilities.

“I think what’s unfolded in Ukraine, the ugliness of it [and] the flawed assumptions that underpinned it from the point of view of President Putin, have unsettled the Chinese leadership a little bit,” said CIA Director William Burns on Thursday during the same hearing. “They’re unsettled by the reputational damage that could come from that for them.”

Burns testified that there was a concern among CCP leadership about the potential economic fallout China could face if the United States were to direct international sanctions against it.

Further, he said, the CCP was worried about the extent to which the war in Ukraine was driving the United States and European nations closer together. Such a situation could present difficulties to the CCP’s efforts to exploit one-on-one relationships with other nations and to drive wedges between the United States and its partners.

When asked how much more sensitive the CCP was than Russia to the risk of damaging their reputation, Burns expressed that he was doubtful any leader would be less caring about their reputation than Putin.

Regardless of the consequences, the CCP and Russia appear ready to trudge forward in their shared goal to diminish the United States’ influence abroad.

Senator Angus King (I-Maine) remarked that the relationship between the CCP and Putin was likely to be one of the leading—if not the leading—threats to the international order in the coming years.

“It seems to me in the last couple of years, really in the last year, we’ve seen a closer cooperation and communication between those two countries,” King said.

“It seems to me, if you’re talking worldwide threats, that’s one of them.”