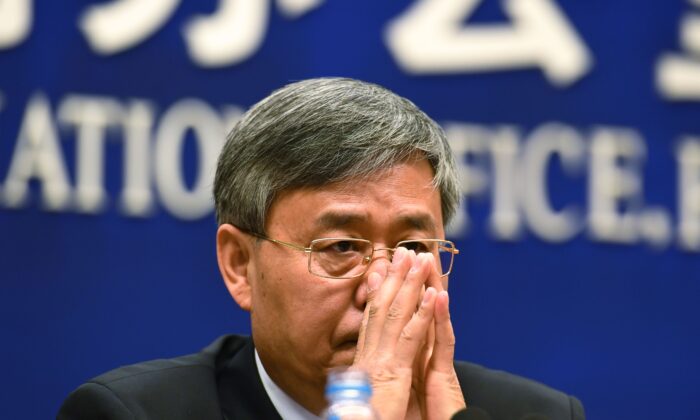 Guo Shuqing, Chairman of the China Banking Regulatory Commission, listens to a question during a press conference in Beijing on March 2, 2017. (Greg Baker/AFP/Getty Images)
Russia-Ukraine War

Chinese Leadership Says It Won’t Join Sanctions on Russia, Trade Will Go on as Normal

China won’t be joining in Western sanctions against Russia over its invasion of Ukraine and opposes such unilateral measures, the country’s banking regulator said on March 2.

Guo Shuqing, chairman of the China Banking and Insurance Regulatory Commission, claimed that Western sanctions on Russia “don’t have much legal basis.”

“We won’t join such sanctions and will keep up normal trade and financial exchanges with relevant parties,” he told reporters during a press conference.

Guo said that Western sanctions on Russia would have a minimal impact on the Chinese economy, now or in the future.

The United States and its allies in Europe and elsewhere have announced a slew of sanctions against Moscow, including banning some big Russian banks from the SWIFT global payments system and limiting its central bank’s access to $640 billion in foreign currency reserves.

The Russian ruble has since crashed, and Russia’s top bank is now quitting almost all of Europe’s markets amid intense pressure.

Meanwhile, China is the only major country that has avoided publicly denouncing Moscow’s attack on Ukraine, and has consistently refused to characterize the move as an invasion.

In a sign that the Chinese Communist Party may be attempting to appease both sides, China’s Foreign Minister Wang Yi held a call with his Ukrainian counterpart Dmytro Kuleba on March 1, during which Kuleba requested that China act as a mediator to make Russia cease its aggression.

Still careful to avoid the “invasion” label, Wang had described the conflict as “expanding warfare,” noting that Beijing was “deeply grieved to see the conflict between Ukraine and Russia and highly concerned about the damage done to civilians.” He added that he supported international efforts to achieve a political settlement.

While the Chinese readout didn’t explicitly say Wang agreed that China would help mediate a ceasefire, the Ukrainian side suggested that he had.

Asked to clarify whether Beijing would take up the mediator role, the ministry’s spokesperson has remained ambiguous. China will “continue to play a constructive role in promoting the deescalation,” he said at a March 2 press briefing.

Meanwhile, the Russian state-controlled energy giant Gazprom signed a contract on Feb. 28 to design a pipeline to China, which would supply as much as 50 billion cubic meters of natural gas to the country annually via Mongolia.