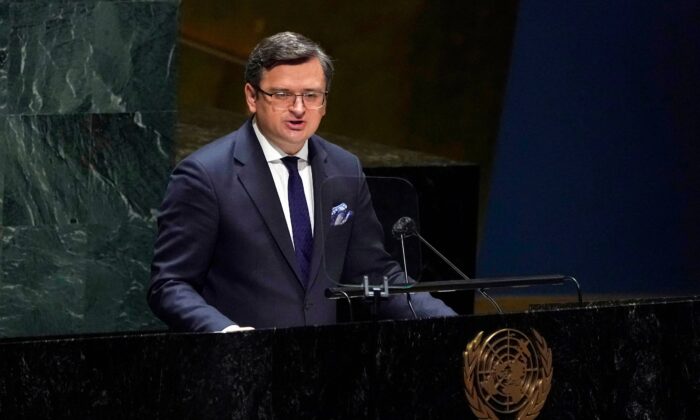 China suggested on March 1 that it was up to the task of playing a mediator role between Russia and Ukraine, despite the communist regime continuing to object to calling Moscow’s attack an invasion, according to Ukrainian officials.

Ukraine’s Foreign Minister Dmytro Kuleba, in a phone call with his counterpart Wang Yi on Tuesday, asked China to “use its level of relations between Beijing and Moscow to force Russia to stop its armed aggression against the Ukrainian people,” the Ukraine embassy in Finland wrote on Twitter on March 1, citing the Ukrainian foreign ministry.

According to the embassy, Kuleba said Wang had assured him of “China’s readiness to make every effort to end the war on Ukrainian soil through diplomacy, including as a permanent member of the [U.N. Security Council.]”

A Chinese readout of the phone call did not show Wang making such a promise about diplomatic efforts through the U.N. body. Instead, the Chinese statement, citing Kuleba, said that Ukraine was “ready to step up communication with the Chinese side” and was looking forward to “China’s mediation effort for the ceasefire.”

Instead of calling Moscow’s attack an invasion, the Chinese readout said it was “a conflict between Ukraine and Russia.”

On Feb. 25, China abstained from voting on a U.N. Security Council Resolution demanding that Moscow stop its attack on Ukraine. Three days later, China took Russia’s side again by voting against a decision by the U.N. Human Rights Council to hold an urgent debate on Russia’s invasion of Ukraine.

So far, China has also refused to condemn Russia’s aggression in Ukraine.

Russia and China now boast a “no limits” partnership after Russian President Vladimir Putin met with Chinese leader Xi Jinping on Feb. 4. According to a lengthy statement released following their meeting, there would be “no ‘forbidden’ areas of cooperation” between the two sides.

There was another significant discrepancy between what China and Ukraine said about the phone call. According to the Ukrainian statement, Kuleba said he told Wang about Russia’s “shelling of civilian infrastructure” and “killing of civilians” in Ukraine. However, the Chinese readout did not say either, but quoted Wang saying that he was “concerned about the damage done to civilians.”

The call between Kuleba and Wang is the first communication to have been reported since Putin launched what he called a “special military operation” in Ukraine on Feb. 24.

“These are only the casualties we were able to cross-check, and the real toll is likely to be much higher,” Throssell stated. “We stress the urgent need for an immediate cessation of hostilities.”

Latvia has also called on China to get involved in stopping Russia’s invasion.

Andžejs Viļumsons, Lativa’s undersecretary of state at the Ministry of Foreign Affairs, told the Chinese ambassador to Lativa, Liang Jiangquan, during a phone call that China should “use its influence bilaterally and at the U.N. Security Council to stop the ongoing aggression against Ukraine,” according to a March 1 statement.

Viļumsons told Liang that it was time for “the whole international community to be united in its support of Ukraine,” given the “increasing use of indiscriminate weapons by Russian forces against civilian infrastructure and residential areas in Ukraine.”