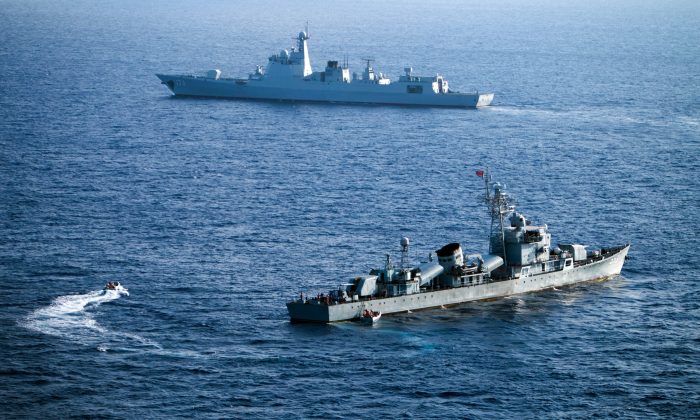 This photo taken on May 5, 2016 shows crew members of China's South Sea Fleet taking part in a drill in the Paracel Islands in the South China Sea. (STR/AFP/Getty Images)
Chinese Regime

Beijing’s recent testing of missiles in the South China Sea has intensified concerns over the Chinese military activities in the hotly contested waters.

Over the past weekend, China tested multiple anti-ship ballistic missiles in the disputed waters, said a U.S. official, who spoke on the condition of anonymity, according to Reuters.

The Pentagon on July 3 condemned the tests, saying it was a “disturbing” act that contradicted Chinese pledges not to militarize the region.

“Of course the Pentagon was aware of the Chinese missile launch from the man-made structures in the South China Sea near the Spratly Islands,” Pentagon spokesperson Lieutenant Colonel Dave Eastburn said in a statement.

“I’m not going to speak on behalf of all the sovereign nations in the region, but I’m sure they agree that the PRC’s (People’s Republic of China) behavior is contrary to its claim to want to bring peace to the region and obviously actions like this are coercive acts meant to intimidate other [South China Sea] claimants,” Eastburn added.

The relationship between Beijing and its neighbors has been rocky at times due to territorial disputes in the South China Sea. Besides China, the Philippines, Vietnam, Malaysia, Brunei, and Taiwan all have competing claims over islands, reefs, and rocks in the resource-rich waters.

To stake its claims over these features, the regime has increased its military presence in the region, including in the area surrounding the Spratly and Paracel Islands, where Beijing has constructed artificial islands equipped with naval and air bases.

China’s Foreign Ministry spokesperson Geng Shuang did not comment when asked about the U.S.’ claims during a regular press conference on July 2. Geng referred the reporter to ask the question to China’s defense ministry.

According to Reuters, Beijing said it was going to carry out drills between the Spratly and Paracel Islands from last weekend until July 3, and warned about entering this designated area.

Beijing on June 29 implemented a naval travel ban in the South China Sea, Voice of America (VOA) reported. The maritime bureau of Sansha, a city in southern China’s Hainan Province, announced that the ban was due to military exercises in the waters, saying the restrictions would last until July 3.

The development was first covered by NBC News, which on July 1 reported, citing anonymous U.S. official, that Beijing had conducted its first ever missile test in the region.

In recent years, the United States has reaffirmed its commitment to strengthen its military presence in the Indo-Pacific region, and ensure freedom of navigation within its waters.

In early June, former acting U.S. Defense Secretary Patrick Shanahan warned that the United States will no longer “tiptoe” around Beijing’s Chinese behavior in the region. Shanahan made the remarks in Singapore during the annual Shangri-La Dialogue, Asia’s biggest security gathering.

U.S. military expansion in Asia could start with the Philippines, as the U.S. Navy is currently considering returning to a shipyard in Subic Bay, U.S. military newspaper Stars and Stripes reported on June 26.

“The U.S. Navy is exploring the viability of Subic Bay Hanjin Shipyard for use as a potential repair and maintenance facility,” said Commander Nate Christensen, deputy public affairs officer of the U.S. Pacific Fleet.

The shipyard located in Subic Bay, on the west coast of the Philippines’ largest island, opens to the South China Sea. Until 1992, the bay was home to one of the largest U.S. deepwater naval bases in the region.

According to Stars and Stripes, U.S. warships and Marines still make regular port calls to the bay.

The shipyard now awaits a new operator, since the Philippine branch of South Korean firm Hanjin Heavy Industries and Construction, filed for bankruptcy after defaulting on debts worth $1.3 billion in January. Shipyards from multiple countries, including China, Australia, and the United States, have since expressed interest in taking over the facility.

Retired Navy Capt. Brian Buzzell, in a piece published in the U.S. Naval Institute’s monthly magazine Proceedings in June, said the opening presented a “golden chance” for the U.S. Navy to return to the bay.

The Navy’s return “would send a strong message to Beijing that, despite its efforts, the alliance between the United States and the Philippines is strong and unbreakable,” he said.

Buzzell added that a port in Subic Bay would mean that U.S. Navy warships would not need to travel to Pearl Harbor for maintenance or repairs while they are on missions in the western Pacific.

Cambodia was flagged in a recent Pentagon report on Indo-Pacific strategy as a country with whom the United States seeks to increase military cooperation.

According to the report, the United States seeks engagement with Cambodia that “protects its sovereignty, promotes military professionalism, and helps it become a responsible and capable contributor to regional security,” despite the fact that the country suspended all joint exercises with the United States in 2017.

Joseph Felter, U.S. Deputy Assistant Secretary of Defense for South and Southeast Asia, wrote a letter to Cambodia’s Minister for National Defense Tea Banh in June, expressing concern that the country may be planning to host Chinese military assets at its Ream Naval Base, according to Japanese media Nikkei.

Felter wrote that the concerns arose after Cambodia abruptly announced in June that U.S. funds would no longer be needed for upgrades at the base, Nikkei reported. Cambodian officials had asked for the repairs in January when Felter toured the base in January, the outlet added.

Ream Naval Base is located south of Sihanoukville, a city that houses Cambodia’s only deepwater port. According to Nikkei, the water near Ream is deep enough to accommodate small patrol vessels.

Banh told Nikkei that he had received Felter’s letter, but denied that Cambodia was going to host Chinese military assets at the base.

The Chinese regime has invested heavily in Cambodia through its flagship “One Belt, One Road” foreign policy initiative, resulting in the country being heavily indebted to Beijing. It now owes $3 billion—nearly half of its foreign debt—to China.