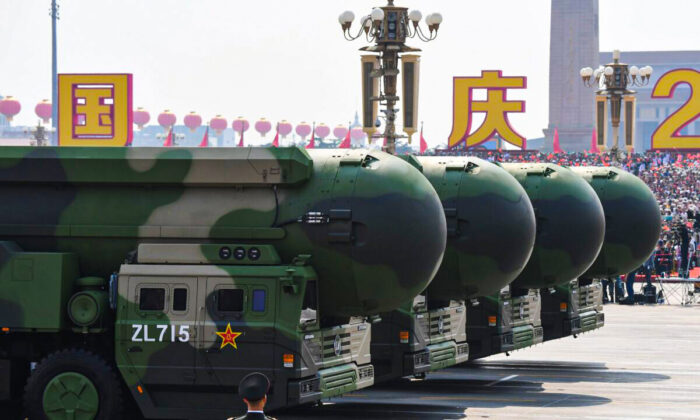 The U.S. Indo-Pacific commander has warned that China’s growing nuclear arsenal poses a threat to the region’s stability, with Beijing pursuing “the largest military buildup in history” since World War II.

“If you’d like to talk about nuclear weapons and the concern for a nuclear arms race, all you have to do is look into the PRC [People’s Republic of China],” Aquilino said at a press conference in Indonesia.

“The only nation increasing the nuclear arsenal right now is the PRC,” he said, adding that China had “300 nuclear silos going in” while the conference was taking place, The Washington Times reported.

According to a fact sheet (pdf) released by the U.S. Department of Defense last year, the accelerating pace of China’s nuclear buildup could enable it to have up to 700 deliverable nuclear warheads by 2027.

The report stated that China could be planning to have at least 1,000 warheads by 2030, exceeding the U.S. initial projection in 2020.

“The PRC has possibly already established a nascent ‘nuclear triad’ with the development of a nuclear capable air-launched ballistic missile (ALBM) and improvement of its ground and sea-based nuclear capabilities,” it stated.

Aquilino was in Indonesia for the Super Garuda Shield exercise, an annual joint military exercise aimed at improving regional cooperation. More than 5,000 troops from the United States, Indonesia, Japan, Singapore, and Australia participated in the drill, which was held from Aug. 1 to Aug. 14.

Beijing had accused the AUKUS nations of taking no notice of “serious nuclear proliferation risks” warning that it could undermine “peace and security in the region.”

Chinese Ministry of Foreign Affairs spokesperson Zhao Lijian said in a July 29 press briefing that the sharing of nuclear information shouldn’t be allowed unless all stakeholders in the International Atomic Energy Agency agreed and if the body had oversight of the deal.

The comments from Beijing come as the United Nations holds its Tenth Review Conference of the Parties to the Treaty on the Non-Proliferation of Nuclear Weapons (Aug. 1 to Aug. 26), which will be scrutinizing AUKUS after requests for review were submitted by China and Indonesia.

But Australia has said that its commitment to the treaty hasn’t wavered, which is why the country will go about obtaining the weapons in the most transparent way possible.

Assistant Defence Minister Tim Ayres told the conference on Aug. 2 that Australia is working with the international nuclear regulator and community to maintain “a nuclear weapons-free and independent Pacific.”