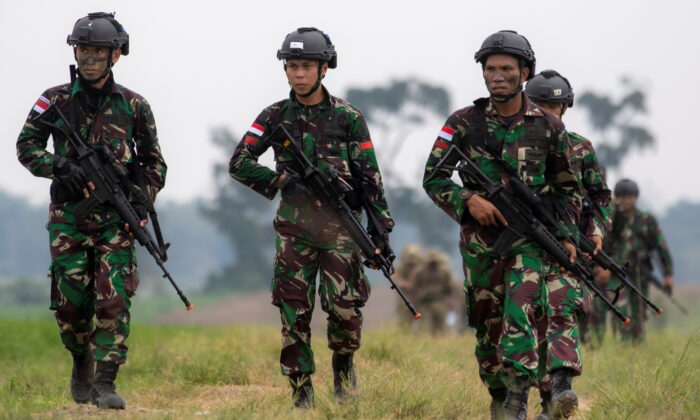 The United States conducted a live-fire drill with Indonesia and allies on Aug. 12 as part of annual joint military exercises to advance regional cooperation amid China’s “destabilizing actions” around Taiwan.

The annual Super Garuda Shield exercise was conducted on the Indonesian islands of Sumatra and Kalimantan from Aug. 1 to 14.

More than 5,000 troops from the U.S., Indonesia, Australia, Japan, and Singapore participated in the drills, making them “significantly larger in scope and scale than previous exercises,” according to the U.S. Embassy and Consulates in Indonesia.

More than 200 paratroopers from the U.S., Indonesia, and Japan conducted trilateral airborne operations with the U.S. 36th Airlift Squadron for the Super Garuda Shield exercises on Aug. 3.

Adm. John C. Aquilino, the U.S. Indo-Pacific Commander, said the 14 nations were signaling stronger ties to achieve stability in the Indo-Pacific region and indicate they are prepared “to respond to any contingency.”

“The destabilizing actions by the People’s Republic of China as it applied to the threatening activities and actions against Taiwan is exactly what we are trying to avoid,” Aquilino said at a press conference.

The expanded drills were held against the backdrop of China’s military threat against Taiwan following U.S. House Speaker Nancy Pelosi’s recent visit to the self-ruled island. China views Taiwan as a renegade province that must be reunited with the mainland.

Beijing has also increased military presence in the South China Sea, where it claims a large portion of the waters under its so-called “nine-dash line.” The Philippines, Brunei, Malaysia, Taiwan, and Vietnam, all have competing claims against China.

While Indonesia and China enjoy generally positive ties, Jakarta has expressed concern about what it sees as Chinese encroachment in its exclusive economic zone in the South China Sea.

Despite its official position as a non-claimant state in the South China Sea, Indonesia has been “dragged along” into the territorial dispute since 2010 after China claimed part of Indonesia’s exclusive economic zone in the Natuna Islands, according to Connie Rahakundini Bakrie, a security analyst at the University of Indonesia.

Bakrie said that Indonesia sees the current exercises with the U.S. as a deterrent in defense of the Natuna Islands, while for Washington, the drills are part of efforts to forge a united front against China’s military buildup in the South China Sea.

“Indonesia wants to send the message that it is fully prepared for any high-intensity conflict in the South China Sea area,” Bakrie said.