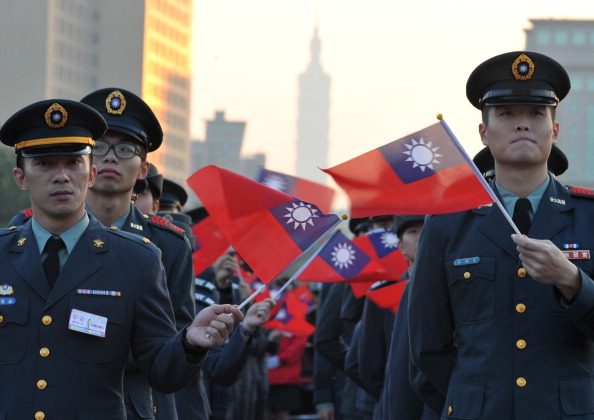 Participants wave the Taiwan’s flag during a flag-raising ceremony at the Presidential Office Square in Taipei on Jan, 1, 2014. (Mandy Cheng/AFP/Getty Images)
Chinese Regime

Taiwan has been braving relentless cyberattacks by Chinese hackers in the past four years, according to the latest statistics provided by the island nation’s military.

Taiwanese websites, especially those run by the military, have been attacked hundreds of millions of times by the Chinese regime’s cyber army and unknown sources, reported Taiwanese newspaper The Liberty Times on May 28.  The annual number reached an all-time high of 727 million times in 2014. Last year, the number stood at about 200 million times.

Military hospitals are frequent targets because the Chinese regime wants to get their hands on the medical records of Taiwan’s military officials and their family, in order to cross-reference with Taiwan military intelligence data that the regime already has in its possession, explained the Liberty Times, citing unnamed local military experts.

The Chinese regime views the self-ruled island of Taiwan as a renegade province that will one day be reunited with the mainland, with military force if necessary. In recent weeks, China has ramped up its aggressive rhetoric and staged military drills in the Taiwan Strait.

“Measures taken through the information security bureau under the legislature, and internal security mechanisms within the Ministry of Defense, have ensured the safety of people’s medical records,” said Chen.

Zheng Ji-wen, editor-in-chief of Taiwanese magazine Asia-Pacific Defense Magazine, warned of the threats from China that Taiwan continues to face, in an interview with Voice of America (VOA) on May 29.

Zheng said, “China’s supercomputers and cloud technology are getting more and more powerful. Being able to compare different information it [China] has obtained, China’s capability should not be ignored.”

In recent years, the relationship between Taiwan and Beijing has become more tense, since President Tsai Ing-wen took office in 2016. Tsai’s Democratic Progressive Party supports the idea of Taiwan formally announcing independence—which is a red flag for China.

Taiwan is not the only target that the Chinese regime is trying to infiltrate. A report by computer security firm FireEye released in March found that the Chinese regime launched cyberattacks to steal U.S. intelligence related to the South China Sea—where China is currently building up its military presence, prompting territorial disputes with a number of nearby Asian countries.

A month later, FireEye issued another report, pointing out increased cyberattacks from the Chinese regime targeting U.S. firms, in an effort to obtain business information advantageous to Chinese companies.