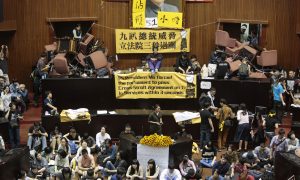 NEW YORK—A candidate for the president of Taiwan in a speech in Brooklyn before 1,200 supporters looked to New York City for inspiration for her island nation while drawing several sharp contrasts with its giant neighbor, China.

“The spirit of New York provides us with an important conviction. A city can be prosperous, and when it is tolerant to differences and it respects different cultures, then you have a great city,” said Tsai Ing-wen, the chairperson of the Democratic Progressive Party (DPP), in Brooklyn’s Marriott Hotel on June 5. “And New York is the most diverse and open-minded place in the world.”

Tsai said Taiwan is also a society with much diversity and tolerance, with new immigrants from China and Southeast Asia. According to Tsai, such diversity should be “Taiwan’s soft power,” and “just like New York, cultural achievements can be shared with the rest of the world while stimulating the economy.”

Tsai was on a 12-day tour with visits to six cities in the United States, including a stopover in Washington, D.C, where the presidential nominee gave a speech at the Center for Strategic and International Studies (CSIS). Tsai concluded her trip with visits to Houston and San Francisco before returning to Taiwan.

Taiwan is now also ready to collaborate with its allies and neighboring countries in Asia to become an example and inspiration to other countries, where freedom and democracy remain a dream.
— Tsai Ing-wen, presidential nominee, Taiwan's Democratic Progressive Party

During Tsai’s tour, the PRC’s ambassador to the United States suggested Tsai must pass muster in China to be legitimate. On June 3, Cui Tiankai said Tsai first “must be put under the test by 1.3 billion Chinese people.” Cui was referring to the issue of the “cross-strait relationship,” reported People’s Net, the online publication of the Chinese Communist Party mouthpiece People’s Daily.

Cui’s remark set off a storm of outrage in Taiwan. Andrew Hsia, the minister of Taiwan’s Mainland Affairs Council, said Tsai is running for the president of Taiwan, and whether she is elected should be a decision left solely for the 23 million Taiwanese citizens, reported the Taiwan newspaper Liberty Times.

China has recently had a more cordial relationship with the ruling Kuomintang (KMT) nationalist party and has often viewed Tsai’s party, the DPP, as a separatist force trying to break away from the one-China policy.

Both China and Taiwan have agreed on the principle that there is one China, although they have agreed to disagree about what that means. However, some elements in the DPP have favored declaring that Taiwan is an independent nation, abandoning the one-China policy.

Tsai was not shy about drawing contrasts between Taiwan and China.

At the Marriott, she pointed out how the Taiwanese people get to enjoy democracy, freedom of speech, and the right to assemble, in remarks that pointed at China’s lack of democracy.

“Taiwan is now also ready to collaborate with its allies and neighboring countries in Asia to become an example and inspiration to other countries, where freedom and democracy remain a dream,” said Tsai.

China, an authoritarian state ruled by a single party, the Chinese Communist Party, has spent much effort to stifle freedom of speech. There have been harsh crackdowns on dissidents and activists, and the regime censors online opinions that it regards as unfavorable. The World Press Freedom Index ranks China as 176 out of 180 countries.

On regional stability, Tsai said, “Peace is the only option for Asia. Every Country in Asia, including Taiwan, must bear a shared responsibility for regional peace.”

“Peaceful resolution to conflict is what people desire the most. They want governments to tackle disputes seriously and to derive a consensus that is acceptable to all parties involved,” she said.

Tsai criticized the ruling party in Taiwan “for an economy that is overly dependent on one single country,” while calling the “Sunflower Movement” the biggest social, political event in the island nation last year.

The Sunflower Movement was a student-driven protest in March and April last year, where protesters occupied the Legislature. They objected to a trade pact with China negotiated by the KMT that they believed would hurt Taiwan’s economy and leave it vulnerable to political maneuvering and pressure from the Chinese regime. The pact was eventually canceled.

“What we strive for is a more autonomous economy,” said Tsai.

In describing a possible economic future for Taiwan, Tsai seemed to return to the inspiration given her by New York’s example: “Advanced technology, cultural creativity industries, cloud-based services, and brand marketing all have incredible development potential in Taiwan and for Asia.”