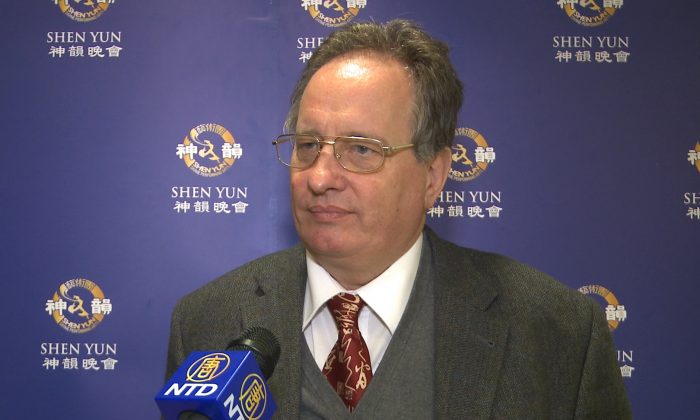 Dr. Weyrauch also saw the New York based Shen Yun last year. He said, “last year my hands turned red from applauding Shen Yun. This year it is no different. One is inspired from watching, it is a marvelous performance. I’m delighted to be here again this year.”

He continued, “It is an excellent artistic accomplishment. I experienced the intensity of the applause and am happy about it. Also, the hall is filled to the brim and those who got a ticket are the lucky ones.”

According to the Shen Yun website, “Audience members are often surprised to hear that Shen Yun cannot be seen in China today. The explanation dates back to the Cultural Revolution and systematic attempts to wipe out the heritage of 5,000 years of civilization.”

Dr. Weyrauch, as a China expert, knows a lot more about that country than the average audience member.

He said, “China’s cultural knowledge dates back thousands of years. Therefore, it hurts deeply that the culture was cut down by the Chinese regime. It began in 1921, when the communist regime came to power. Since then, culture has been dragged through the mud. People that wanted to keep the culture alive were and still are persecuted, which is outrageous.”

Therefore, “It is a great achievement by Shen Yun to bring back China’s culture. Shen Yun is an entity that brings the true Chinese culture back to life. This is wonderful.”

He added, “Because China has such a rich culture, we have to be thankful that we are given this opportunity today that lets us see the country’s culture.”

Before leaving, he said that “culture is the way to return to humanness and values that make us human. Therefore, it is important for us to see this performance. It is worthwhile and we will learn from Shen Yun what true culture entails. We only have to think about it.”