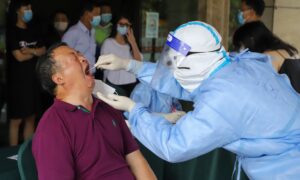 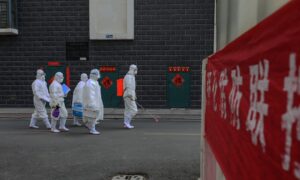 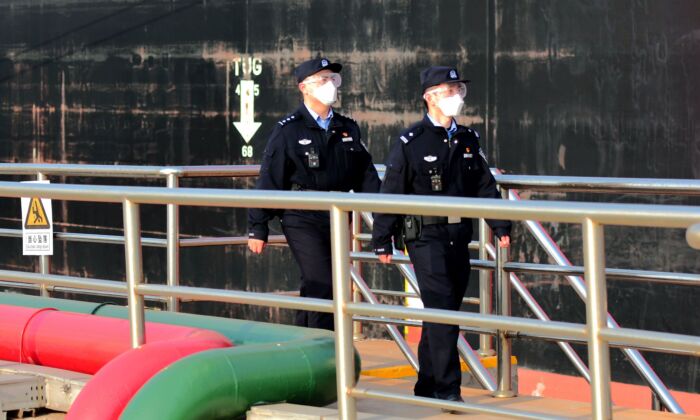 Police officers who are wearing masks watch an oil tanker unloading crude oil at the port in Qingdao, eastern China's Shandong Province on March 20, 2020. (STR/AFP via Getty Images)
INSIDE CHINA

As China prepares to celebrate the eight-day Mid-Autumn Festival holiday, authorities in popular tourist cities are claiming that they are safe to visit—despite lockdowns and school restrictions suggesting that COVID-19 infections haven’t yet subsided.

China will observe a national holiday beginning Oct. 1 to celebrate the festival, as well as the anniversary of the Chinese Communist Party (CCP)’s takeover of the country.

Qingdao city, a seaside municipality on China’s eastern coast that’s a major tourist destination, reported two asymptomatic carriers late on Sept. 24. Since then, authorities organized mass COVID-19 testing and claimed that the city is safe to visit during the upcoming holiday season.

However, a Qingdao university has placed all of its students under lockdown to prevent the spread of COVID-19, only allowing students to take a one-day break and prohibiting them from traveling.

“The Chinese economy is in bad shape. Each local government is trying to grab the opportunity to promote consumption during the holiday,” said U.S.-based China affairs commentator Tang Jingyuan. “Tourists will bring stimulation to the local economy because they need accommodations, food, and transportation, and will visit tourist sites and shop for souvenirs.”

He added that authorities wouldn’t overtly launch strict lockdown policies because Beijing in early September had hosted a conference at which Chinese leader Xi Jinping touted the country’s success in fighting the virus and handed out awards.

“It won’t allow the negative news to deny its political achievement,” Tang said.

The commission said that the city would conduct COVID-19 nucleic acid testing once every two weeks on eight types of high-risk people, including medical staff, port workers, and people who had entered China from another country.

It said two workers who unloaded imported frozen seafood from a freight ship on the evening of Sept. 19 tested positive. That led the commission to claim that the outbreak was due to contaminated frozen seafood—even as food products are not known to spread the virus.

The wife of one of the infected patients is a cook at the Qingdao No. 4 Middle School, while the other patient lives in an apartment that he shares with two roommates.

The commission claimed that they were asymptomatic carriers, their family members or roommates were free of the virus, and that no other infections were found in the city.

On Sept. 26, state-run broadcaster CCTV quoted the deputy director of Qingdao’s Center for Disease Control and Prevention as saying the city was safe and that people could enjoy a vacation in the city.

During the holiday, many Chinese travel around the country to take in famous sightseeing sites or visit family members.

While Yunnan Province and other tourist regions are also promoting their tourist sites, just weeks ago, on Sept. 19, the Yunnan government announced that the entire province would enter “wartime” status, due to a new wave of CCP virus infections that started in Ruili city. Ruili was locked down on Sept. 14.

But on Sept. 22, officials in Ruili suddenly announced that they had eased the lockdown.

A student from the Qingdao University of Science and Technology (QUST) told the Chinese-language Epoch Times in a phone interview that he and fellow students have been locked down on campus since Sept. 12. The campus, in Sifang district, was blocked by newly installed wire-mesh walls, he said.

“We must apply for a special permit from the campus director if we really need to go out, which is complicated and needs time,” the student said.

The QUST director office confirmed the lockdown when contacted by The Epoch Times. The receptionist said the school isn’t allowing students to go home for the holiday.

Several local business owners who operate stores or shops close to QUST told The Epoch Times that due to the lockdown, students couldn’t visit their stores—which has hurt sales.

An interviewee shared bulletin board posts on the campus, where students asked school staff why teachers could enter and leave campus freely, but they couldn’t. One student complained that the school installed more doors recently on the campus to make sure students won’t go out without permission.

All interviewees spoke on condition of anonymity for fear of reprisal from Chinese authorities.

The Chinese regime has used the “one-size-fits-all” approach to mandatory COVID-19 lockdowns at universities around the country.

In the past week, students at the Guangzhou Institute of Science and Technology in Guangdong Province complained that the lockdown policy caused trash to pile up on campus and local food prices to increase.