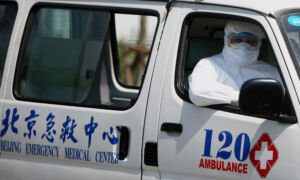 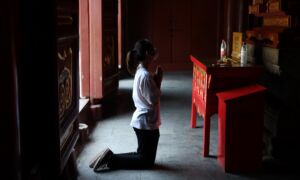 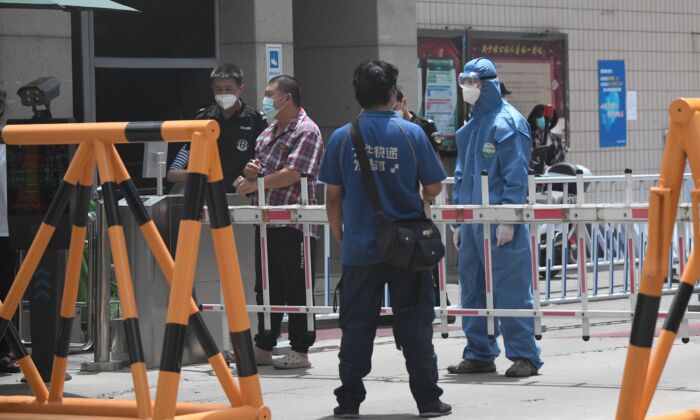 A security personnel wearing a protective suit stands guard at a residential area under lockdown near Yuquan East Market in Beijing, China on June 15, 2020. (NOEL CELIS/AFP via Getty Images)
INSIDE CHINA

A new outbreak in the city of Beijing has prompted authorities to enact strict measures to contain the virus.

A city official said on June 15 that the entire city has entered “war-time mode,” while people infected with the virus after visiting Beijing have been located in Hebei, Sichuan, and Liaoning provinces—spurring fears that the virus was spreading further.

Chinese medical specialists attributed the new outbreak to contaminated salmon that was sold at a Beijing market, leading to authorities halting imports of European salmon—though experts say the fish itself is unlikely to carry the disease.

China’s National Health Commission announced on June 15 that 36 new patients were diagnosed with the CCP virus in Beijing the day prior.

Later on Monday, Beijing announced that between June 11 to 14, 79 people were confirmed to be infected and experiencing symptoms, with seven others as asymptomatic carriers. China counts the latter in a separate category.

However, internal documents from Ditan Hospital, the only hospital in Beijing known to be currently treating COVID-19 patients, obtained by The Epoch Times, showed that on June 14, the facility treated 375 patients who had fever—41 of them diagnosed with COVID-19.

That is five more than the officially announced figure of 36.

But Chinese authorities’ data itself was also inconsistent. Gao Xiaojun, spokesman of the Beijing municipal health commission, said at a press conference that about 200,000 residents in the city received nucleic acid tests in the past days.

“On June 14, Beijing tested samples from 76,499 people. Fifty-nine of them are positive,” Gao said. But Gao didn’t explain why the number doesn’t match with the officially announced 36 diagnosed patients and 6 asymptomatic carriers for June 14, which totals 42 positives.

The outbreak has spread to other parts of the country. Southwestern China’s Sichuan Province reported on June 15 that there was one newly diagnosed patient, who came back to Sichuan from Beijing on June 9. Her husband is still in Beijing and was also diagnosed with COVID-19 on June 14.

Also on Monday, northern China’s Hebei Province reported three confirmed patients and one asymptomatic carrier. They are the grandmother, mother, father, and six-year-old child in the same family. All four had visited Beijing recently, and two of them visited the Xinfadi food market, which authorities claim to be ground zero of the new outbreak.

The sprawling Xinfadi market is a complex of warehouses and trading halls spanning an area the size of nearly 160 soccer pitches. Xinfadi is more than 20 times larger than the seafood market in the city of Wuhan where some of the first CCP virus cases were recorded. Thousands of tons of vegetables, fruits, and meat change hands at the market each day.

The new cases have led many areas in Beijing to reimpose tough measures first seen when the virus was spreading across the country in January, including round-the-clock security checkpoints, closing schools and sports venues, and reinstating temperature checks at malls, supermarkets, and offices.

Residents were also advised to avoid crowds and gathering in groups for meals.

Some districts also sent officials to residential compounds in what they described as a “knock, knock” operation to identify people who had visited Xinfadi.

On Sunday afternoon, the Huaxiang area of Fengtai district, Beijing was designated as a “high-risk region” for virus spread. 12 neighborhoods were added to the list of “medium-risk regions,” making it a total of 22 areas.

Governments in many parts of China also warned residents against non-essential travel to the capital and imposed quarantine requirements on visitors from Beijing.

Authorities have not yet identified how exactly the virus spread from the Xinfadi market.

Since June 12 evening, state-run media have suggested that the outbreak originated from imported salmon, because authorities found traces of the virus on a cutting board that was used for processing imported salmon at the market.

On Saturday, China’s National Health Commission ordered “a comprehensive inspection” of all seafood markets in Beijing.

During a Monday broadcast on state-run CCTV, Yang Peng, a specialist on infectious disease control at the Beijing Center for Disease Prevention and Control (CDC), was quoted as saying that after genetic sequencing, the virus found at the market was similar to the strain found in Europe.

“The preliminary judgment is that the virus is related to… contaminated seafood or meat, or people who entered the market,” Yang said.

Wu Zunyou, the chief specialist at China CDC, told state-run newspaper People’s Daily on June 15: “The source of the virus at this outbreak is not from Beijing. It must be from another place.”

But Wu said the genetic sequencing doesn’t necessarily mean the virus is from Europe. “It’s also possible that it’s from North America or Russia.”

Dr. Sean Lin, former lab director of the viral disease branch at Walter Reed Army Institute of Research, said it is impossible for salmon to transmit a type of coronavirus to humans.

“Normally [consuming contaminated] fish can cause digestive system diseases, such as enteritis, bacterial gastroenteritis, and so on,” Lin added.

Zhang Yuxi, chairman of the Xinfadi market, also told state-run newspaper Beijing News that all nine employees who work at salmon booths in the market have tested negative for the virus.

Still, almost all Beijing markets and restaurants removed salmon from their shelves and menus on Saturday.

Some European suppliers of salmon said they can no longer sell to China.

“We can’t send any salmon to China now, the market is closed,” said Stein Martinsen, head of sales and marketing at Norway Royal Salmon.

Norway’s Food Safety Authority also said there was no evidence fish could be infected with the virus.