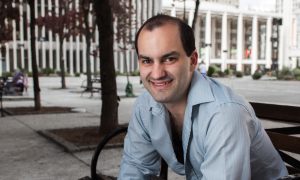 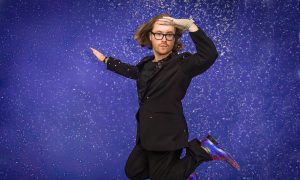 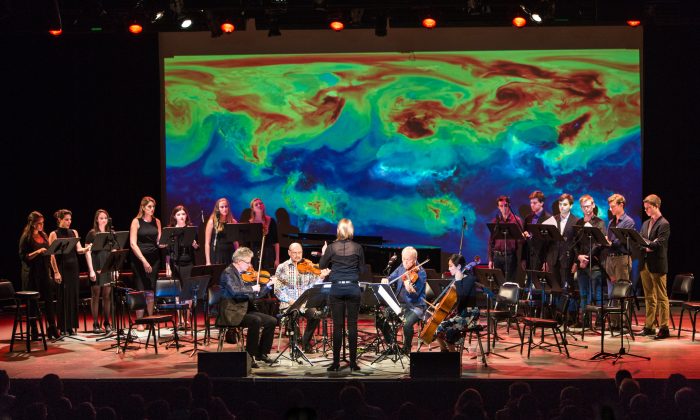 NEW YORK—Temperatures are rising. Pollutants have been weaving a thickening blanket in the atmosphere, most rapidly in the past 50 years. That’s not even a blink of an eye in geological time.

Yet as the climate change debate continues percolating—some crying out the 11th hour, others denying any cause for alarm—a young composer simply looks at the hard data and transforms it into hauntingly beautiful, arresting music.

When Vladislav Boguinia first leafed through pages and pages of statistical variables of atmospheric carbon dioxide (CO2) concentration levels and graphs of annual mean land–ocean temperatures, he began to hear music. He felt challenged to transcribe the increasing, slightly fluctuating numbers in an accurate and artful way.

Tall and thin, with a dignified, commanding demeanor, Boguinia has taken on the role of an artist reflecting the current zeitgeist very deliberately. Aiming to achieve a perfect balance between the technical and the spiritual side of music, he took data from NOAA and NASA and brought the rather uninspired numbers to life.

“For all of our existence as musicians, searching, finding, and achieving that balance is an endless voyage,” Boguinia said in NYU Steinhardt, where he is pursuing a Master in Music Technology and is an honorary member of the piano department.

He shared his creative process a few days before his piece “Rise” premiered at the Music for a Sustainable Planet concert on Sept. 23 at Symphony Space—featuring the Grammy winning Kronos Quartet and the AEON Music Ensemble, which he directs.

As the atmospheric CO2 concentration levels rise, the harmony becomes distorted and dissonant suggesting an imbalance in our planet.
— Vladislav Boguinia , pianist and composer

Vladislav’s brother, Yuri Boguinia, a violinist and also a composer, is pursuing a doctorate at Princeton. He was the main driving force in ensuring that the Music for a Sustainable Planet concert would be performed at Symphony Space—a larger venue than what was initially chosen.

Yuri has worked with the Moscow String Quartet, the Julliard Orchestra, and the Kronos Quartet, among others. His curly head of hair and facial features, reminiscent of angels depicted in Italian Renaissance Fran Angelico paintings, give away his poetic sensibility, yet his will power is unyielding.

The Boguinia brothers are just a little over a year apart in age. “I’m the younger one,” Vladislav said. “He’s the taller one,” Yuri followed as if to indicate the balance in their relationship as brothers, fellow composers, and collaborators. Born in Stavropol in southern Russia, they immigrated to the United States in 2000, when Vladislav was 8 and Yuri was 9 years old.

During the interview they followed and finished each other’s sentences, full of enthusiasm as they explained their creative process. They compose pieces separately, but rely on each other for advice, bouncing ideas off of each other. They often perform in or conduct each other’s pieces.

In composing “Rise,” for insight Vladislav turned to one of his favorite composers, Johann Sebastian Bach—that most revered of composers who signed all of his cantatas “for glory to God alone.” Speaking of Bach, Vladislav said, “Absolutely incredible music, in the craft and the way he approaches every single note, every single measure, and every single section.” He said “Rise” has an “indirect reference, not a quotation, to Bach’s style of composition.”

Yuri interjected to explain further, “You are working with intervals, you are working with chords, vertical and linear things, but at the same time it is art—it’s supposed to move and make someone feel something.” Having analyzed a lot of Bach’s music Yuri affirmed, “From a technical perspective it’s just flawlessly built, and then you listen to it and it brings you to tears.”

At the premiere, “Rise” began gradually as the choir sang numbers. In the first four bars, the sopranos sang the numbers 8 and 14 legato, while the altos sang 39, 6, 2, 14, 4, 14, 6, 3, 28, and 4. The tenors sang just three numbers, 8, 3, 14 while the bass singers, sang the number 8, 12 times and 4, four times in a punchy, steady beat. The harmonies unfolded through time, bolstered by the Kronos Quartet. The choir continued singing numbers until the very end of the piece.

Every single note the Kronos Quartet played corresponds to numeric values of CO2 levels and every number the AENON choir sang represented annual temperature means, spanning 115 years from 1900 to 2015.

“As the piece progresses you can actually hear these frequencies rising slowly,” Vladislav said, showing the score. “Every second basically represents one month of passing time, so in three measures we have a year,” he explained.

About 10 minutes into the piece, which roughly corresponds with the 1960s, the dissonance starts to set in.

We as the human race can influence this piece … it’s completely in our hands.
— Vladislav Boguinia

Using pitch class set theory, Valdislav discovered that when he took for example the atmospheric CO2 concentration for the year 1900 of 295.7 ppm, that number translated to pitches (Re, La, Fa) creating Re minor harmony. The decimal number 7 translated to the pitch Sol, which he used to create melodic sounds. He also represented the CO2 levels with an electronic component, which translated the numeric values as processed sine wave frequencies. Taking the same year, 1900, and CO2 level of 295.7 ppm, when he translated that value to sound wave, 295.7 Hz, it produced the same pitch, Re.

“So transcribing this using set theory for traditional instruments you get a D minor chord and when you transcribe actual frequencies you get the same sonority,” Vladislav said.

Interview excerpt of Vladislav’s explanation on the piano:

Yuri chimed in on the discovery, “When he started writing this, I was completely shocked.”

Yuri conducted during rehearsals, preparing the ground for their guest conductor from Germany, Ruth Reinhardt. She studied with Alan Gilbert of the New York Philharmonic and is currently a Concert Fellow at Julliard and a Conducting Fellow with the Seattle Symphony. She arrived in New York City a few days before the concert to shape the piece. Reinhardt said she considered “Rise” as having four climaxes, two low points, and a very intense build up at the end.

Speaking of the low points, Vladislav said, “There are interesting moments where numbers result in these really peaceful harmonies.” It’s as if the accumulating CO2 concentrations had a brief escape valve, only to continue further on to increasing dissonance.

A video from NASA showing carbon dioxide level simulations of the earth was projected on the backdrop of the stage, and edited to correspond with the intensity of the music. Ebbs and flows of various colors swirled across the world map. As the piece progressed, you could actually see how the Earth is becoming more polluted.

“The harmony of the early 20th century is very consonant, however as the atmospheric CO2 concentration levels rise, the harmony becomes distorted and dissonant suggesting an imbalance in our planet,” Vladislav wrote in the program notes. Looking at the score, there’s not much ink in the beginning pages, then “towards the end it evolves into a really complex texture of really complicated polyrhythms,” said Vladislav.

Developing from gentle harmonies, unfolding and fluctuating throughout, then towards the end spinning into a very dense, cacophonous, increasingly loud climax, “Rise” ends abruptly—no cadenza, no coda. For now it ended in this year, 2015.

Music is a way for us to really remember, to think about who we are and what’s important to us.
— Yuri Boguinia, composer and violinist

There was a wonderfully long, palpable silence before the audience applauded—perhaps relieved, stunned, annoyed, or moved to tears by the beautiful reflection of our times and the state of our environment.

“‘Rise’ is actually never finished, as we progress in time and get new data,” Vladislav said. “We as the human race can influence this piece, if you want [CO2 levels] to continue rising and for the music to become more clashing, more chaotic, and more hectic, it’s completely in our hands,” he said.

Symphony Space was nearly packed on September 23. The concert opened with Kronos Quartet playing gorgeous pieces by Omar Souleyman, and Hamza El Din, before the “Rise” premiere. Yuri arranged Terry Riley’s In C, minor, and played the violin with the AEON ensemble and singers, closing the concert’s program.

When the Boguinia brothers initially had planned the concert they reached out to Jeffrey Sachs, Director of the Earth Institute Columbia University, and a senior U.N. advisor. The timing was just ripe.

Reflecting on his musical vision, Yuri said, “Music is a way for us to really remember, to think about who we are and what’s important to us.” Vladislav was more succinct, he said, music “It’s life.”

The Boguinia brothers and the AEON Music Ensemble, which they founded, will perform next in Carnegie Hall on November 15.