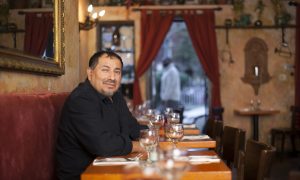 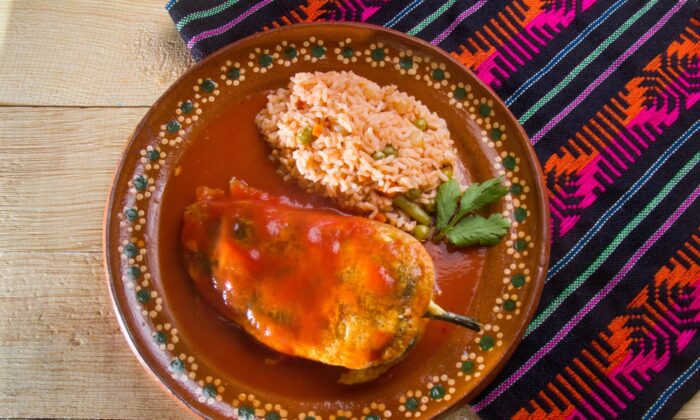 Chiles rellenos harnesses the glorious combination of chile and cheese, an unstoppable culinary force if there ever was one. Consider the pizzaz that chile flakes add to pizza, or the pungent spice a green chile adds to a cheeseburger, or the beer-absorbent qualities of a jalapeño popper, itself a miniature, simplified version of a chile relleno.

An ornery pepper, spicy and pungent, will soften in the creamy embrace of the cheese, and each will taste more vivid in the presence of the other. A chile relleno builds on this combination, and wraps it in stiffened egg coating.

Once, when I was a restaurant critic in Albuquerque, I made the mistake of referring to the exterior of a chile relleno as a “batter,” in a review of Dahlia’s Central Mexican Cuisine. When the owner threatened to sue my newspaper, The Weekly Alibi, her list of grievances included the assertion that the coating on her chile relleno was a meringue, rather than a mere batter. She wasn’t wrong. (But I stood and still stand by what I said about her albondigas.)

Most people know chiles rellenos as an option on a Mexican combo plate, but it’s a lot more interesting as a main dish, served with a simple, fresh tomato sauce, which adds an acidic layer to the complex flavor. Yet with so much going for it, I think the standard restaurant version underachieves, weighted down unnecessarily by the grease absorbed by the deep-fried spongy meringue. I reviewed them according to local standards and kept my true feelings to myself, but I never stopped comparing them to my first chiles rellenos, which I experienced on a farm in the Idaho panhandle.

Up there on Killarney Farm, chiles rellenos were a celebration of the twin seasons of chile and tomato. But instead of serving a chile relleno on a puddle of tomato sauce in the traditional style, Ellen Scriven would pour the stiff egg mixture over a cast iron pan full of roasted chiles and tomatoes, and bake the pan in the wood-fired cookstove, using only a fraction of the grease.

Roasting the green chiles—be they jalapeño, Anaheim, New Mexico, poblano, or another—is not only the first step in chiles rellenos, but an important life skill. The roasting can happen on a grill, under a broiler, on a stovetop, or even in a toaster oven. Since I use the oven to cook my chiles rellenos, I use it to roast the chiles, too.

Instead of the traditional tomato sauce, we roast the tomatoes along with the chiles, and bake them with the cheese-stuffed chiles in the stiff egg mixture.

Place the chiles about five inches under the broiler, on a cookie sheet or the oven grate. About 8 minutes in, you should be able to detect the odor of burning chile skins, a smell as seductive as that of baking bread. Turn them over and roast for about 5 minutes. Turn and roast the chiles on a third side for 4 final minutes. You want the chiles cooked all around, even if every square inch isn’t blistered.

Transfer the chiles to a container with a lid, and leave them for 15 minutes to “sweat,” a process that loosens the skins.

Meanwhile, separate the eggs and beat the whites stiff. Gently fold in the unbroken yolks (if you beat the yolks they will stick to the mixing bowl), and 2 teaspoons of flour.

When the chiles are cool enough to handle, gently peel them, pinching the skin here and there to help pull it away from the cooked chile flesh, and transfer to a plate. If a chile falls apart, salvage as much cooked chile flesh as you can. My baked style is a lot more forgiving than the traditional greasy relleno.

Make two perpendicular slits near the top of each chile, like a “T,” and carefully scoop out the seeds and membranes. Sprinkle the chiles with the rest of the flour, rolling them carefully around the plate to mop up all the flour, inside and out. For the fallen apart chiles, just put them back together as best you can after coating in flour. Stuff them with cheese and reconstruct as tightly as possible.

Mix the onions and tomatoes with the oil, salt, and pepper and add this mixture to a cast iron skillet or heavy baking dish. Broil until they start to blacken on top. Then turn the oven to 400 degrees F on bake.

Remove the pan from the oven and push the sizzling veggies toward the perimeter, leaving a space in the middle for the stuffed chiles. Add the chiles and spoon the meringue over them, judiciously but completely, reserving some for your artful piles of tomato and onions.

Place in the oven with the light on, and watch it like a hawk. When the eggs have the first hint of brown—about 8 minutes—remove from the oven. Serve with salsa.