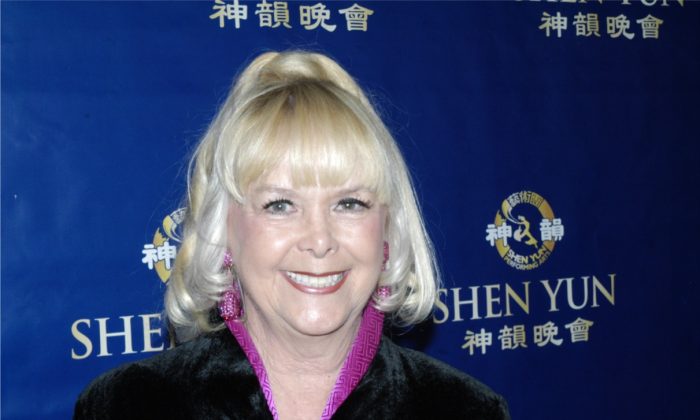 Shen Yun Performing Arts began in 2006 when “a group of leading classical Chinese artists came together in New York with one wish: to revive the true, divinely inspired culture of China and share it with the world,” according to the company’s website.

A Shen Yun performance has classical Chinese dance as its focus, but also includes a live, full orchestra with both Eastern and Western instruments, vocal and instrumental soloists, and a unique digital backdrop that complements the dances.

Ms. Allen thought the interaction between the dancers and the backdrop was very enjoyable.

“I especially love the technology here, the way the people, the actors and actresses jump into the scene and out of the scene,” she said. “It was just absolutely wonderful. Very clever!”

Ms. Allen was also moved by the spiritual elements of the Shen Yun performance.

“It really does touch your heart, and you can feel the emotion through their dance,” she said.
“It’s very deep and lovely.”

Ms. Allen said, “I’m just enjoying it with all my heart and soul.”

Ms. Allen taught elementary school for 48 years and was the director of the California Junior Light Opera Company for 37 years. She has been a member of the Laguna Niguel Chamber of Commerce board of directors and the chair of its Education Committee to generate scholarship funds. She was also named Laguna Niguel’s 2007 Citizen of the Year.