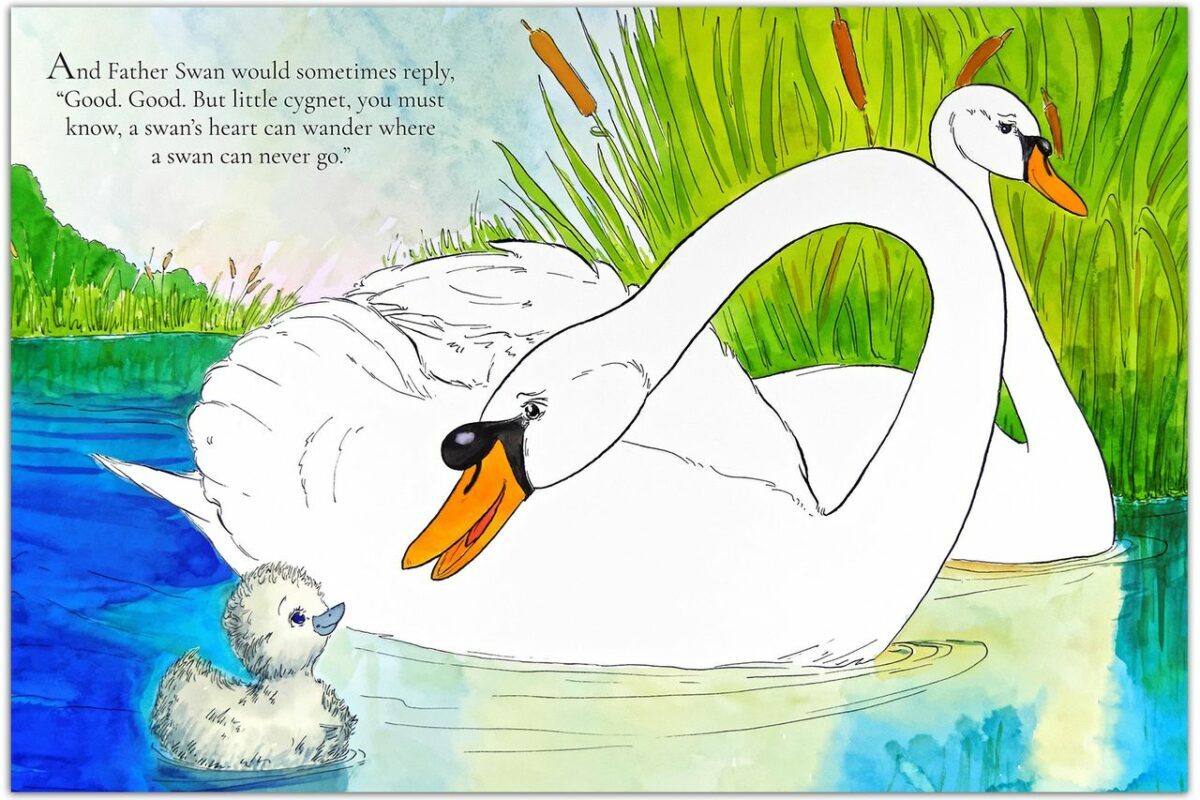 Children’s Books: ‘The Handsome Little Cygnet,’ a Tale of Love and Identity

Manhattan may not be the first place you would look for a strong family with a good father, but the author of a new children’s book reveals one living on a lake in Central Park. In “The Handsome Little Cygnet,” writer and illustrator duo Matthew Mehan and John Folley show us a family of swans coping beautifully with an identity crisis—in lightly metered prose and 20 gorgeous watercolors.

Below, Carolyn Moynihan asks Mehan, a Washington dad, founding contributor to MercatorNet, liberal arts teacher for 20 years, and now a professor of government at Hillsdale College, about his second venture into children’s literature.

Carolyn Moynihan: It has been three years since you and John Folley produced your first children’s book, “Mr. Mehan’s Mildly Amusing Mythical Mammals.” How is that one doing out in the world?

Matthew Mehan: It’s doing very well. Considering it was our first book and that we didn’t know what we were doing in terms of publicity and promotion, I think it went very well. We were a best seller on Amazon, and we were the top seller for one-year sales ever for a publisher. And I continue to get touching letters from young readers.

Ms. Moynihan: You have moved up in the academic world recently—but not so high as to disdain creating children’s books. Do you have any models along that path?

Mr. Mehan: I’m sure I’m not the first, but no one leaps to mind. Now that I am a professor of government in a graduate school, I really don’t see any contradiction in writing children’s books, because I teach every year Aristotle‘s “Politics,” in which he both begins and ends the art of politics with a discussion of the all-important political act of educating the next generation. So, in a fun sense but also in a very real sense, this is very much a part of my new profession.

Ms. Moynihan: I was thinking about Tolkien. It’s questionable whether “The Hobbit” is a children’s book, but there were his “Letters From Father Christmas” and a couple of others. Perhaps also your hero Thomas More …

Mr. Mehan: You flatter me!

Ms. Moynihan: Besides moving from mammals to birds, how else is “The Handsome Little Cygnet” different from the first book?

Mr. Mehan: The last book was a gargantuan and elaborate cultural bonanza for middle graders, a book designed for a curious child to get lost in all summer. “The Handsome Little Cygnet” is a storybook for younger children and families to read to younger children. It has the one thing “Mr. Mehan’s Mildly Amusing Mythical Mammals” lacked: the beauty of simplicity.

Mr. Mehan: Frankly, I’m not sure. It sorted itself out in my mind slowly two winters ago. But obviously, like any good poet, I have to thank the heavenly “muse.” But on a more human level, part of the inspiration came from parenting in a crazy world. The story features a family of swans in the big city—Manhattan actually, Central Park—and their little baby cygnet is trying to figure out what he is meant to be. And I don’t have to tell you that that has become a very difficult process.

Ms. Moynihan: It’s a very simple story for young children, but there are some important life lessons in it for our time. What does it say about families?

Mr. Mehan: I think it models an image of very thoughtful parents and how their calm and straightforward love for their child [or cygnet] ends up being one of the greatest gifts their child needs for growing up and becoming what he is meant to be.

Mr. Mehan: Our plucky little cygnet encounters a curious obstacle to growing up in a happy way that ends up being a kind of challenge to finding his authentic identity. That’s why this is a kind of retelling of the “Ugly Duckling” fable by Hans Christian Andersen. This baby swan needs to know both what he is and who he is. The first part means looking around at the nature of things, and the second part means looking carefully at who really loves and cares for him. But it’s a tricky thing, and I don’t think there’s a lot of guidance out there in kid lit or in culture generally right now, neither for children nor families generally.

Mr. Mehan: I chose the setting of Central Park because it is a beautiful backdrop that was made by clever human beings—New Yorkers are very clever people!—who used art to shape and fashion the park’s natural elements and heighten their beauty for our happiness. I had an old mentor, a brilliant and big-hearted teacher, who used to say, “To be a male is a question of biology; to be a man is the work of a lifetime.” The first part is what we are. That’s a given. But then we have to artfully craft ourselves into who we are in order to become fully human or in this case truly a swan. Nature and art together—that’s a human being and that’s Central Park.

Ms. Moynihan: It is beautiful to look at, thanks to Mr. Folley. An art lesson, among other things?

Mr. Mehan: Always. John and I insisted on beauty in our work, so the carefully crafted words have to have carefully crafted art. And this time, John painted beautiful watercolors of Central Park, full of Easter eggs and urban icons of the Big Apple. Too often, kids’ books look careless, some even ugly. That’s not our way. We are both fathers of large broods, and we want to put beauty before our children to open their imaginations to the whole world and beyond.

Ms. Moynihan: Any ideas brewing for the next book?

Mr. Mehan: Yes. All I will say now is that John and I are excited for that one, too!

Mother and Father Swan take great care in raising their son. They not only provide a safe home for him, but seek to educate him about the world around him. Father Swan makes a point of expressing the love these devoted parents have for their child and of reminding the child not to stray far from their protection.

Young and enthusiastic, the little cygnet agrees without giving thought to the implication of his words.

“And the handsome little cygnet would quickly reply, ‘I will, I will! I love you so. Why would I wander? Where would I go?’”

But a wise Father Swan emphasizes the importance of guarding one’s heart.

“And Father Swan would sometimes reply, ‘Good. Good. But little cygnet, you must know, a swan’s heart can wander where a swan can never go.’”

The father’s warnings are well-founded and, as often happens when children test their freedom, they go unheeded. For the little cygnet, previously content with his gray downy feathers, sees glistening, newly painted graffiti on a nearby bridge and decides he too must be full of color.

The young swan sullies his soft down with sticky paint only to find that the colors turn him into a greenish-brown mess. He runs to his mother who recommends that he seek the fish in the pond for help. The fish clean the little cygnet and he is returned to his former self.

Matthew Mehan packs several life lessons into “The Handsome Little Cygnet.” The lifelong fidelity of the swan couple to each other, the unconditional nature of parental love, and the importance of filial love and respect for one’s parents are all demonstrated in this picture book. The story also lends itself to introducing the concepts of purity and modesty to very small children.

The little cygnet learns that while some things may seem attractive, the lack of healthy self-love can lead one to try things that are harmful. The baby swan learns to appreciate his true self through his mistake and the non-judgmental forgiveness of his mother.

John Folley’s illustrations of Manhattan’s Central Park set the white swans in stark contrast to the vivid backgrounds of each page. The book adds a “seek-n-find” list at the end of the story, which includes New York landmarks and images from the duo’s first book, “Mr. Mehan’s Mildly Amusing Mythical Mammals: a Hypothetical Alphabetical.”