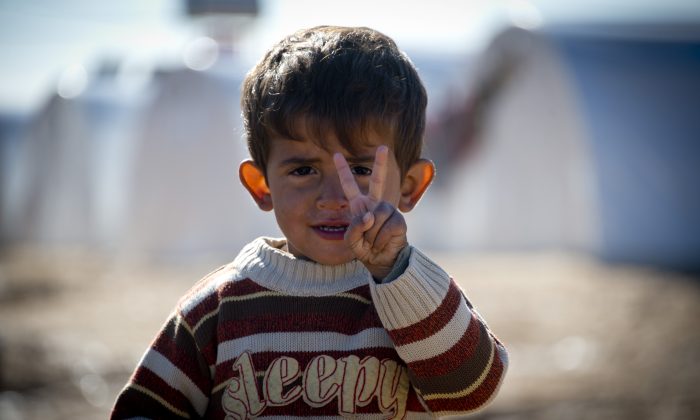 Standing in front of a row of plastic tents a young boy refugee flashes the V-sign in a refugee camp on the border between Syria and Turkey near the northern city of Azaz on December 5, 2012. (AFP PHOTO / ODD ANDERSEN)
Arts & Culture

Children’s Books on the Refugee Experience Are Crucial Reading

While facts and figures are useful to understand the scale of the refugee problem, for most people it’s the personal angle that they best relate to. But this personal angle, and the sympathy and understanding that it promotes, is hard to come by, especially in young children.

Children’s literature that focuses on the refugee experience can provide just that. Books such as Refugee Boy by Benjamin Zephaniah and The Other Side of Truth by Beverley Naidoo focus on the individual’s story. They offer a voice to descriptions of suffering and resilience in the face of the huge challenges that fleeing for safety and seeking asylum bring

I worked as a refugee support teacher in a school in Deptford, London for 12 years before transferring to Goldsmiths as a Lecturer on the PGCE course. About a quarter of the primary school population there were child refugees, or from a refugee background. Uprooted suddenly from their home country, sometimes unaware of the surrounding situation, sometimes fleeing from burning homes with only the clothes on their back, these children showed incredible resilience and fortitude in challenging circumstances.

Some told me of difficult journeys taking many days, cowering in the back of blacked-out vans, with frightened parents and sick siblings alongside. Some had jumped on boats, some had been left at airports, some had had easy journeys, but others had family members who had been persecuted or even killed.

We built up sufficient trust with some of these children to ask them to share their stories in a special assembly for Refugee Week. And their courage, and the respect paid to them by their peers during these times, was intensely moving. So for children at that school, the refugee experience was something they were familiar with. They had either by heard about it directly from others, or from their families, or had lived it themselves.

Staff and children in this school had cultivated an incredibly sensitive perspective. But children without this rich diversity of personal and individual stories around them will struggle to come to understand the reality for many others living in their country. And without this openness, refugee children who are isolated in their experience are unlikely to feel that their story is heard and understood.

It seemed to me that children’s fiction could be a conduit for this, in its power to reflect children’s lives or take them on journeys way beyond their own parameters. And so I began to introduce books into the classroom, even for those as young as the primary age range. It was an exciting, controversial, and yet sensitive venture.

Before the millennium, most children’s books written about flight or displacement had looked back to World War II. But since then, and with refugee numbers rising dramatically in this country and peaking in 2002, there has been a huge explosion in the number of children’s books written about the refugee experience, reflecting those seeking sanctuary from all corners of the world. Even the number of picture books dealing with this challenging issue continues to grow.

We should promote the reading of more of these books, and at all ages. I would recommend The Colour of Home by Mary Hoffman, a picture book about a Somali child confronting their past and adapting to the present. Sarah Garland’s Azzi In Between, a graphic novel for younger children, is also fantastic, as is Shadow by the past Children’s Laureate, Michael Morpurgo, and my favourite, Beverley Naidoo’s The Other Side of Truth, which follows two Nigerian children who are smuggled into Britain following the assassination of their mother, and fostered by an English family until their father can join them.

Get your hands on some of these. Buy, beg, borrow. Reading children’s books as an adult is illuminating, especially old favourites. Better still, share the book with a child and discuss their response. If the child is a refugee, you might help them feel less alone in that experience, and if they are from a refugee background, they might come to a better understanding of what their parents might have been through.

And incredibly importantly, those who are neither would benefit from learning a bit about what friends, classmates, or children depicted in the media might have buried in their past.

Julia Hope does not work for, consult to, own shares in or receive funding from any company or organisation that would benefit from this article, and has no relevant affiliations.