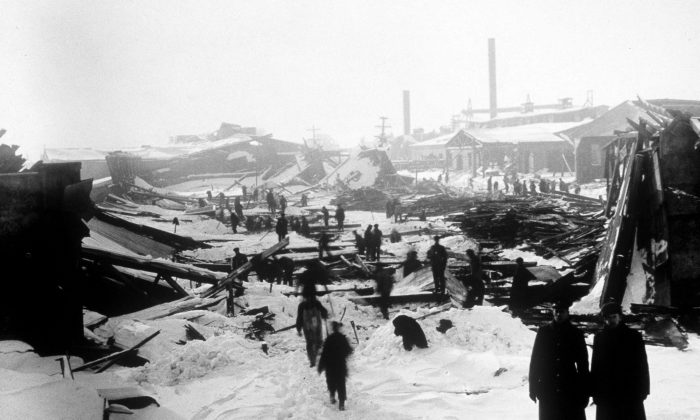 File photo of the aftermath of the 1917 Halifax ship explosion. A fresh generation of children's books is finding the grace notes in Halifax's worst moment, a massive explosion that levelled much of the city 100 years ago but inspired acts of kindness that still resonate. (THE CANADIAN PRESS/National Archives of Canada)
Arts & Culture

HALIFAX—A fresh generation of children’s books is finding the grace notes in Halifax’s worst moment—a massive explosion that levelled much of the city 100 years ago but inspired acts of kindness that still resonate.

The books vary on how closely they approach the widespread injury and nearly 2,000 deaths that resulted from the Halifax Explosion of Dec. 6, 1917, when a French munitions ship collided with a Belgian relief vessel in the city’s wartime harbour.

Still, as hurricanes and earthquakes batter communities around the globe, the books’ retelling of Halifax’s time of trial tend to come together in their desire to find hope amid the floods and rubble.

“I didn’t want to dwell on the destruction, but more on the help that people gave,” said Marijke Simons, author of “The Flying Squirrel Stowaways: from Nova Scotia to Boston,” one of two picture books for young children that recall how Boston residents rushed north by train to assist.

Other books deal with the experiences of a Halifax newsboy, and of an orphaned girl who loses her family.

The Christmas tree given each year as a gift by Halifax to its southern neighbour is a key theme for Simons as well as for illustrator Belle DeMont and her father John DeMont in their book “The Little Tree by the Sea: From Halifax to Boston with Love.”

The main character in “Little Tree by the Sea” is an imaginary tree that grows on the slope of Citadel Hill overlooking the city, calling out in alarm as the Mont Blanc collides with the Imo. The tree’s cries for help drift across the water to Boston.

The little tree eventually grows tall in the “city by the sea” and offers itself as a recollection of love.

“It’s finding the sweet that counters the bitter always, in any situation. My favourite kids’ books are ones that go down and up just like life does. You find solutions. You find silver linings,” Belle said in an interview.

Simons’ book only references the explosion indirectly, though it is focused on coping with adversity. The artist and teacher has created flying squirrels whose enormous eastern spruce becomes the annual gift from Halifax to its southern neighbour, forcing them to seek a new home.

Simons, her husband, and her granddaughter travelled to the site at Waycobah, N.S., and watched as Mi’kmaq elders performed a smudging ceremony in the tree’s honour before it was cut and loaded onto a truck for its journey into Halifax and then southwards.

The author leans over to speak to her granddaughter as the sacred ceremony unfolds, saying, “Boston sent us a trainload of nurses and doctors. No one forgets a kindness like that.”

She says she was inspired by how the Bostonians responded with supplies, people, and its knowledge of how to rebuild.

More detailed accounts of response are found in Allison Lawlor’s non-fiction book “Broken Pieces: An Orphan of the Halifax Explosion,” aimed at 7- to 10-year-old readers.

Lawlor tells the story of 14-year-old Barbara Orr, who was walking to a friend’s house when the explosion occurred. Readers learn about rescue efforts and historical events such as the bravery of Vincent Coleman, the railway dispatcher who stayed at his station to send out a warning.

The writer quotes television personality Fred Rogers, who said, “When I was a boy and I would see scary things in the news, my mother would say to me: ‘Look for the helpers. You will always find people who are helping.'”

Jacqueline Halsey’s book “Explosion Newsie,” published in 2015, tells the story of 9-year-old Macky as he delivers newspapers both before and after the explosion. His efforts help people discover their injured loved ones.

The former librarian says children continue to need stories of disaster and of redemption, for this is what life is like.

“My mother grew up in the Blitz, night after night being bombed … and my daughter was in Fort McMurray and her house was burned in a blink of an eye,” she said.

“Looking back at the Halifax Explosion you see people rise again. If you love your community and you love each other, you can rebuild.”