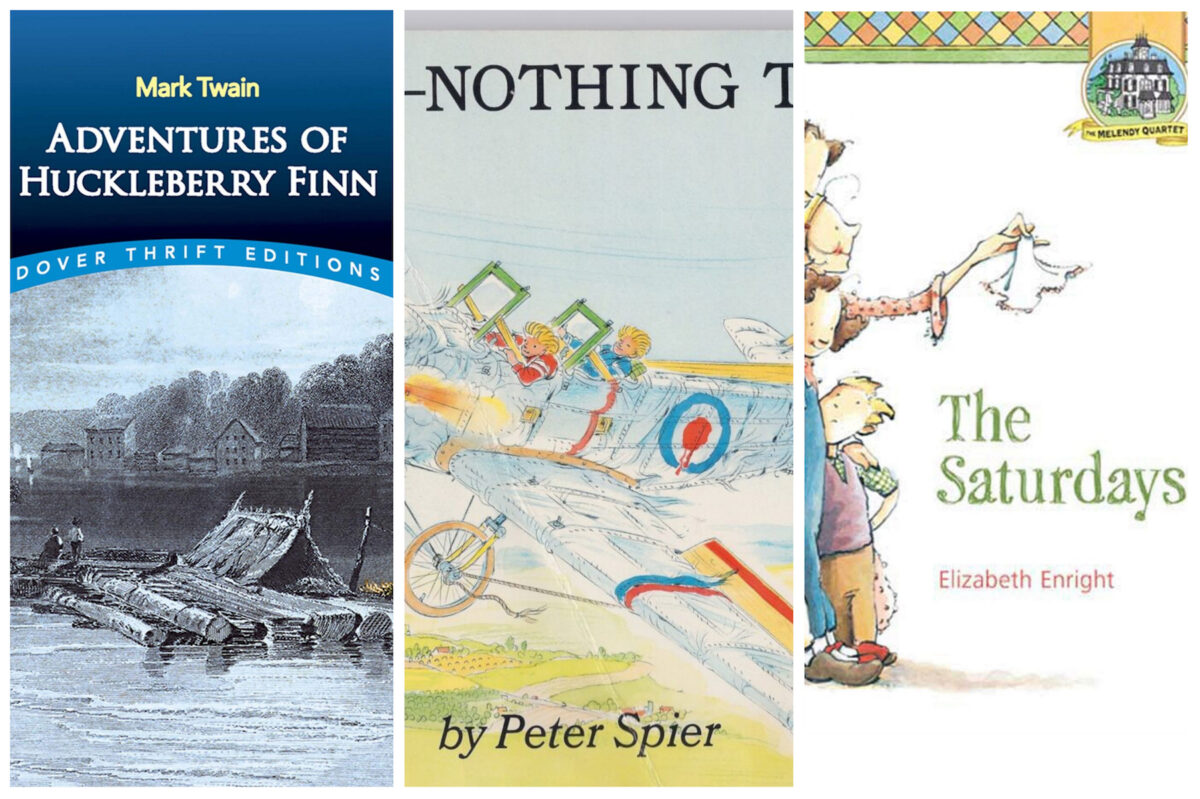 Summer break free time can bring almost endless opportunities for adventures and fun, but the long-awaited release from the school year’s structure can also lead to boredom.

Here are three books to suggest when you’re met with this summer’s chorus of “I’m bored.”

While you may not want your child to perfectly mimic the characters in these stories (rafting down the Mississippi River like Huckleberry Finn isn’t recommended), each book portrays the possibilities that come with embracing creativity and adventure.

‘Bored—Nothing to Do!’ by Peter Spier

Bored with nothing to do is exactly what the two main characters are in Peter Spier’s charming and appropriately titled picture book. Scolded by Mom for sitting around doing nothing, the boys wander into the garage and find something that sparks their imagination. The two boys spend the afternoon building a real working airplane! How is that possible?

The book shows the boys’ ingenuity as they bring together wheels from the baby buggy, wire from the TV antenna, sheets from the linen closet, and an engine from the car. Their project doesn’t go unnoticed for long, however, as Mom and Dad are left wondering why the TV is broken and the car won’t start.

Spier’s illustrations have so much detail that a rich story unfolds, even though each page contains only a sentence or two. “Bored—Nothing to Do!” will appeal most to inventive young readers aged 4 and up.

Parents may want to know ahead of time that in one scene, the boys are disciplined with a mild spanking. (Doubleday Books for Young Readers, 1987, 44 pages)

‘The Saturdays’ by Elizabeth Enright

Readers are introduced to the Melendy children, Mona, Rush, Randy, and Oliver, in the family’s delightful playroom, named, more seriously, their office. Yet, despite having paints and clay, a piano and books, and even a trapeze, one rainy Saturday afternoon, the four find themselves bored and frustrated.

Then, inspiration strikes, and Randy suggests a plan that will give them the opportunity to liven up their upcoming weekends. By saving and pooling their allowance money every Saturday, one Melendy child will be able to go out on their own into the city and spend it on an activity of their choice. Trips to art museums, circuses, and operas are dreamed up and executed with varying degrees of calamity.

This chapter book is full of charming episodes in which police officers on horses heroically save the day, and old family friends that were once thought dull turn out to have thrilling stories of their childhood before the turn of the century. Elizabeth Enright’s “The Saturdays” is the first book in the Melendy Quartet and will give readers a glimpse into New York in the 1940s, when $1.50 was enough money to have an afternoon adventure. This book is great for reading aloud as a family or—for ages 8 and up—independent reading. (Square Fish, 2008, 192 pages)

‘The Adventures of Huckleberry Finn’ by Mark Twain

Mark Twain’s “The Adventures of Huckleberry Finn” is a classic summertime adventure that begins with a restless Huckleberry bored and stifled by kindly attempts to civilize him. But even being civilized is better than how his Pap treats him, so when his cruel father finds him and brings him back home, Huck plans an escape. Sailing down the Mississippi River on a raft dwarfed by the river’s steamboats, Huck soon meets another escapee, Jim, a runaway slave.

Set in the pre-Civil War South, the novel depicts Huck’s confusion as realizes his own conscience contradicts what he was taught is right and wrong. With Huckleberry Finn as narrator, the reader experiences each of Huck’s moral dilemmas and his resulting realizations.

Twain’s style is frequently humorous, and Huck Finn’s journey is full of twists and turns. Although sometimes taught in school, “The Adventures of Huckleberry Finn” shouldn’t be disqualified from being a just-for-fun summer read for ages 13 and up. (Dover Publications, 1994, 224 pages)