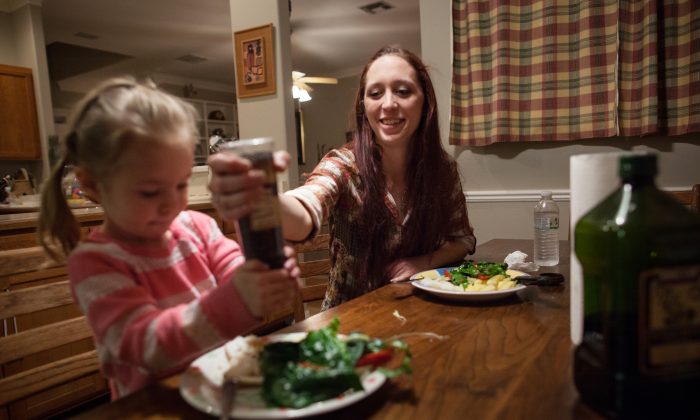 The number of children under 18 receiving food stamps doubled between 2001 and 2014, from 8 million to 16 million, Census Bureau data shows. Poverty rates rose as well, but not nearly at the same pace, suggesting rising interest in–and dependency on–the program.

Children have been steadily sinking into poverty over the past decade. The data also shows an increasing number of poor families who forwent food stamps in the past are now reaching for them.

The food stamps, officially called Supplemental Nutrition Assistance Program or SNAP, have been around in some form for over 50 years. Today the program distributes about $70 billion a year to almost 47 million Americans with low or no income.

Participants receive debit cards charged every month with federal money based on their income. The more they earn, the less they get. A family of four with no income gets about $650 a month. With a monthly income of $1,500, the benefit drops to some $200. With income over $2,000 per month, the benefit virtually disappears. The upper threshold for applicants’ income is 30 percent above the poverty line, but they also have to prove they don’t have savings.

The cards can be used to buy groceries, but not hot food, household supplies, pet food, or alcohol and cigarettes. Less than 2 percent of the benefits get misused, such as being exchanged for cash.

More than half of the 16 million children who now use food stamps live in single-mother households, Census Bureau reported.

When looking at how large a part of the population uses the benefit, one sees a rising trend among all demographics.

Among non-Hispanic white children, about 6 percent received food stamps in 2001. In 2014 it was almost 13 percent–more than one in eight.

Among Hispanic children the jump was from under 16 percent to over 31 percent.

But the poverty rate, the main eligibility factor for food stamps, hasn’t jumped that dramatically.

In 2001, almost 17 percent of children lived in poverty—over 32 percent of black, 29 percent of Hispanic, and close to 10 percent of white children.

That means 14 years ago, a significant share of poor families wouldn’t ask for food stamps, even while eligible for them. A quarter of poor black children wouldn’t draw the benefit, almost a third of poor white children, and close to half the poor Hispanic children.

By 2014 however, most seem to have gotten on board with the program.