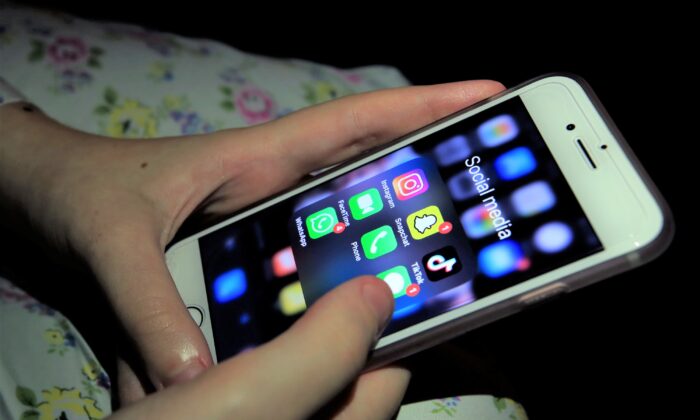 A young girl looking at social media apps, including TikTok, Instagram, Snapchat, and WhatsApp, on a smartphone on Nov. 12, 2019. (Peter Byrne/PA)
News & Discoveries

Children Missing Full Night’s Sleep a Week Because of Social Media Use: Study

Young children are losing out on the equivalent of a full night’s sleep a week because their bedtime routines are being delayed by increased social media use, according to new research.

Researchers from De Montfort University in Leicester, UK, studied social media use and sleep quality in 60 schoolchildren aged 10 to 11 and found that on average they were only sleeping 8.7 hours a night when they should be getting a recommended 9 to 12 hours.

This amounted to one night of sleep missed a week.

The study also found that kids were experiencing higher levels of FOMO, or fear of missing out, anxiety, and bad sleep.

Conducted as schools started to reopen after COVID-19 lockdowns, the research asked Leicester children about their bedtime routines to judge their sleep quality, and found that the more time they spent on social media, the worse their quality of sleep.

The researchers claim that Sorcha Newby’s study, which is currently under peer review, is the first to examine the role of social media use and sleep quality in pre-teens.

TikTok was the most popular app at 89 percent; 84 percent said they used Snapchat; 87.5 percent used YouTube; and 57 percent used Instagram.

Ben Carter, reader in medical statistics at King’s College London, has written highly-cited papers (pdf) looking into problematic smartphone usage and associated mental health outcomes among children and young people. He has also recently published a study that looked into how an app for NHS workers offered an improvement in mental health and well-being.

Carter told The Epoch Times that the vast majority of evidence that has been presented where people are using devices later in the day suggests that they lead to an interruption in circadian rhythm, one of the biggest predictors of poor sleep.

“The FOMO totally buys into that argument,” he said. “They are using the devices, they are engaging with whatever they are seeing, and it is that that is keeping them up at night,” added Carter.

“We do know that all children have all access to devices. What we do know is that at one end of the scale there is a link to harm, but we don’t know the extent of that,” he said.

In his upcoming research, he said that 12 percent of children in a study are not just saying they have a problem, they are asking for help.

He added that teachers have told him that mobile devices are a “double-edged” sword.

“A device can be an incredibly helpful learning tool for children and it also has massive positives. You can look through literature and there will be untold stories of devices keeping children and adolescents connected during the time of the pandemic. Though for balance, there would be likely some harm in those with the most problematic usage,” he added.

Speaking about the study at the British Science Festival in Leicester on Wednesday, John Shaw, a lecturer at De Montfort University in the psychology division, said, “This is quite terrifying when you think about the level of engagement that they’re having.”

“I suppose it is that knock-on effect on sleep and what that means for the children in terms of their cognitive development and really their social development as well because if they are always online, what does that mean for them with their in-person socialisation?” added Shaw.

“Because if you’re constantly worrying about what is going on online and you’re not there, that’s going to have effects, but with the FOMO and anxiety, we saw kids who are on social media more have increased anxiety levels, and it is just spiralling,” he said.

On reported higher levels of FOMO and anxiety affecting sleep, Shaw said that this “has an impact on their cognitive and biological development.”

“When they sleep it’s very important for emotion processing and memory consolidation, creativity, and problem-solving. When you’re not getting enough sleep, those processes don’t get a chance to occur. When it comes to biological processes during sleep, when we enter slow-wave sleep, our body rests, recovers, releases growth hormone,” he added.

“They’re still growing, that’s why younger people tend to get more sleep than adults because they are going through biological changes,” said Shaw.