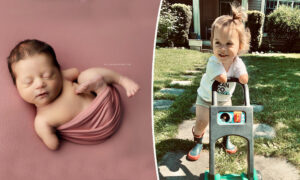 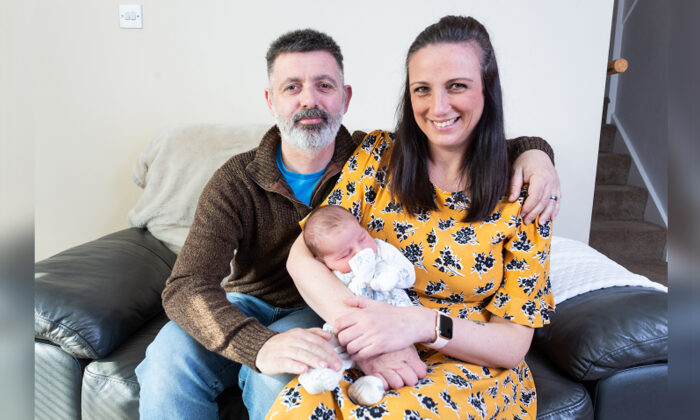 A British woman who couldn’t conceive after years of trying was preparing for surgery to have her ovaries removed when she discovered she was pregnant.

Caroline Darlington, 39, and her husband, Roy, 48, from Warrington, Cheshire, tried to have children for years, even turning to IVF. Eventually, they accepted their family was complete with their adopted son, now 6 years old.

The stay-at-home mom, who suffered from excruciating endometriosis and a cyst, had reluctantly decided to have her last ovary removed. However, in a final scan to check her womb health before surgery, the sonographer made an unexpected discovery.

Caroline was 16 weeks pregnant with her “miracle” first child. And it never would have happened if the pandemic hadn’t postponed her ovary operation just long enough for her to become pregnant.

It took two years for them to welcome their first biological child, and they felt that their little family was complete. Their son Jorge Albert Darlington was born on March 29, weighing a healthy 11 pounds 4 ounces (approx. 5 kg).

Caroline said: “I had a scan, and the nurse told me ‘your ovary looks fine, but you’re actually pregnant.’

“My stomach had been swollen but I just assumed it was the cyst growing.

“I had a mask on when I found out, so you couldn’t see my full facial expression, but you can imagine it was a bit of a shock.

“I remember thinking ‘Oh my God, what is my husband going to say!’

“We were both in complete shock for a few days. We feel our new arrival is a miracle, that would never have happened if there hadn’t been a pandemic.”

Caroline and Roy married in 2001, moved to Germany for his work in the army, and one year later they planned to expand their family.

“I’ve always wanted children, ever since I was a little girl, and played with dolls,” Caroline said.

“I trained as a nursery nurse so I have always been around children.”

Caroline’s periods were often irregular, and she eventually discovered she had polycystic ovary syndrome, a disorder where the ovaries may fail to regularly release eggs.

“It definitely had both a physical and psychological toll on me because even with all the treatments,” she said, “they still couldn’t tell me why it wasn’t happening for us.”

In 2004, Caroline was referred to Hammersmith IVF Hospital for a course of IVF, but it failed the day she took her pregnancy test when she started to bleed.

“It was an awful time,” she recalled. “I was traumatized really. You just thought it was going to work and obviously, it didn’t.

“After that we kind of had a break and decided that we weren’t going to have children as I didn’t want to keep putting my body through all the hormones.”

In 2007, Caroline was rushed to hospital with extreme abdominal pains and internal bleeding, which turned out to be a ruptured ovarian cyst.

The following year, the exhausted couple moved back to the United Kingdom and decided not to go ahead with any more fertility treatments. In 2015, they adopted a 10-month-old boy.

“I had watched a few programs on the telly about adoption and got my husband to watch them afterward,” she said. “When he did he said ‘Why not give it a go?’ and so we started the process!”

“They assured me after that that it was very unlikely to happen again,” she said. “I lost about two pints of blood and one of my ovaries was removed—it was hugely traumatic. I felt more terrible for my son, though, because it was his Christmas day that was being ruined.”

Caroline was then diagnosed with endometriosis, a condition where tissue similar to the womb lining begins growing in other places such as the ovaries. It is believed over 10 percent of women worldwide have this condition.

As she continued to be in a lot of pain, she made the decision to have her second ovary removed. She began preoperation preparation in February 2020, but everything was put on hold when COVID-19 hit.

Caroline was finally undergoing presurgery preparation in September last year, but luckily, she found out she was 16 weeks pregnant. She waited to tell Roy the news, but when she got home he’d already guessed she was pregnant because he said he could hear her smiling down the phone.

Jorge was born at Warrington General Hospital, the same hospital where Caroline was due to have her ovaries surgically removed.

“We feel grateful for our blessing and let people know out there that you should never give up hope!” she said.