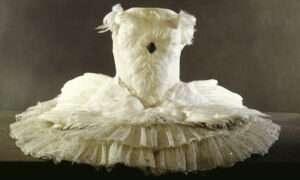 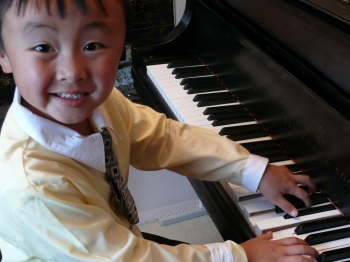 Six-year-old Xiaoping Wang plays the piano with the skill and confidence of someone years older. (The Epoch Times)
Arts & Culture

NEW YORK—He tapped his feet on an air floor while playing Beethoven's Sonatina in F Major. A six-and-half-year-old was giving me a taste of what he had played the night before—a concert at Carnegie Hall as part of New York University at Stony Brook's summer music program. Traditionally offered to young adults, Xiaoping Wang was invited into the program after organizers watched a DVD sent by his music teacher. After finishing the piece, Wang slid further down the piano stool. With his feet now on the pedals, he began Chopin's Waltz in A Minor. "I prefer to play Chopin because I can use the pedals."

His young age belied the mature sounds coming from his instrument as if a twenty-year-old was playing a well-practiced piece. The child looked at me then sometimes at the ceiling without missing a note. Fortunately for Wang, his father supports his talent but does not push him to practice. Wang's father says, "Xiaoping is still very young and has to live his childhood. He likes to play, but he is just a child."

When Wang began, the piano felt comfortable. He said in his childish manner, "I started with separate hands first with [piano teacher] Dr. Macchioni." This technique did not take long to learn. He soon won El Paso competitions for local children two years in a row. "To get to first place one must practice a lot," he said. "I would be sad if I got second because I do not like second. I want first place or zero place."

Macchioni's teacher and a mentor of musical talent, Dr. Trenchi de Bottazzi, joined me as I talked with the young prodigy. Xiaoping sat on her lap with a toy in his hands. "You know he is so young and can act as a child but he can sound like 25-year old when he plays."

Bottazzi said she believes in reincarnation and how it shows through talented students. She said she has taught some students who she believes have been pianists in a past life. She surmises that this is the case with Xiaoping. "This is just remembering and he is one. His body is young but not his soul." "You do not learn to piano like this in six or seven years. Nobody can," says Bottazzi. She spoke of her own experience of remembering. "Until Debussy, the pieces sounded familiar and after Debussy, I had to learn note by note." As we spoke, coffee was being served. In Spanish, Xiaoping asked for milk and a lot of sugar in his coffee. Yes, he drinks coffee.

Bottazzi saw great things in the boy's future. "His life is going to be extraordinary and you see it right now," she said.

At the beginning of our meeting, like most children, Xiaoping was timid in approaching a stranger. But as I left, just like old friends, he jumped up and gave me a big hug.