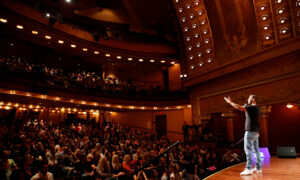 A Heart for Children 30th-Year Gala’ Brings in Record Donations

BERLIN—Seven weeks after their arrival, all of the Berlin sextuplets have passed the 4.4-lb. threshold, and the "Sechs Richtigen (Six Correct Ones)" made their first TV appearance at this year’s Gala. Moderator Thomas Gottschalk introduced the large family during the television program, "A Heart for Children 30th-Year Gala," broadcast from Berlin's Ullstein-Hall.

The four tiny girls and two boys may leave the hospital in about five weeks—their actual due date. To make life easier for this large family, the Heart for Children Foundation wants to donate items in multiples of six to the family, according to Thomas Gottschalk.

Throughout the annual Gala, viewers showed their willingness to pledge and donate—in spite of the economic down-turn. Saturday saw pledges in the amount of US$19.3 million for various projects for needy children, almost US$4 million more than in 2007, which was itself a record year. By tradition, two-thirds of the money raised will go to needy children in Germany.

Hollywood actor George Clooney was the evening's star guest. The UN-Peace Ambassador accepted the Golden Heart Award for his work in the Darfur region. He took the opportunity to remind viewers of the need for help to combat the current cholera epidemic in Zimbabwe.

Gaby Dohm, known from the program "Die Schwarzwaldklinik (Black Forest Clinic),“ introduced a small boy afflicted with Down’s syndrome. The actress was instrumental in arranging for the boy to undergo special therapy developed in the United States for brain-damaged children. She pointed out that health insurance does not pay for this treatment, although it increases a child’s cognitive development.

Film sequences reminded the viewers of abused children in Germany.  Singer Sarah Connor accepted donations for the Bremen Project: "A Home for Children." This church-sponsored charity houses and cares for neglected children in a part of Bremen where each child is afflicted by poverty.

Maybrit Illner solicited donations for Tibetan children whose parents had sent them into exile across the Himalayan Mountains. She told the viewers, "It is virtually impossible for these children to ever again see their parents."

Ms. Illner had arrived with the Dalai Lama's sister Jetsun Pema, who is in charge of the Indian Children's Villages. It is a place where refugees can find a new sense of belonging.

Another guest, Maria Blumencron, author of “Goodbye Tibet,” has also created a very moving film about Tibetan children who have fled across the Himalayan Mountains into Nepal.

One of the highlights of the evening was the appearance of eight-year-old Connie Talbot from Great Britain. She is known from the "British Superstar Finals." Her easy rendition of the Whitney Houston classic "I Will Always Love You“ was captivating. Nena, Rolf Zuckowski, and Peter Maffay performed the Gala theme song, "Your Heart for Children."

As is customary, several prominent personalities accepted phone pledges from the viewers. Among them were Boris Becker, Oliver Kahn and Olympic medallist Matthias Steiner. The weight lifter brought a symbolic check to the stage at the conclusion of the evening—the  record amount of more than US$19.3 million in the organization's 30-year history.

Though the Gala was a huge success—raising an additional US$4 million from households and private enterprises this year—it may have been the last of its kind. The Axel Springer AG [Corporation] has announced its plan to cancel the 2009 event due to difficulties in the advertising business.