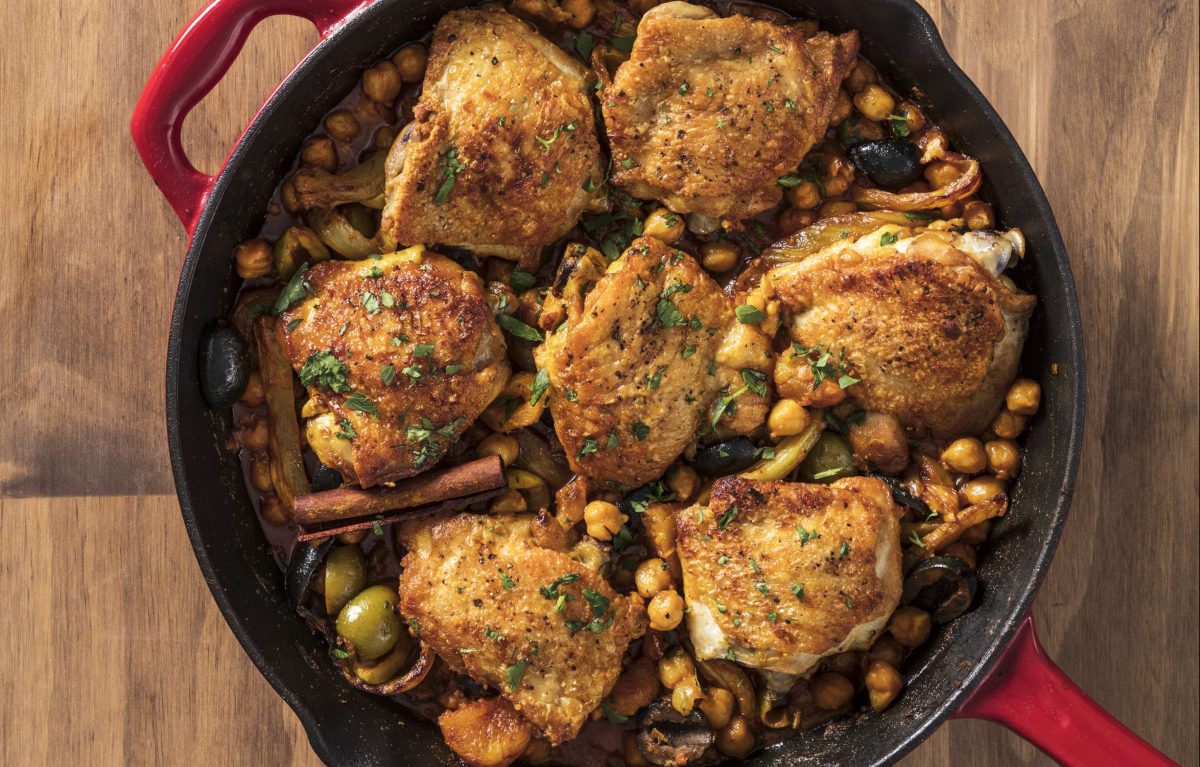 Why this recipe works: While traditional spice blends for Moroccan tagines can contain upward of 30 spices, we found just a few everyday spices were necessary to recreate the authentic notes of Moroccan chicken tagine in a simple skillet meal. We used skin-on chicken thighs and browned the meat; then we browned fennel in the rendered fat and bloomed a blend of spicy, earthy, and warm ground spices and a whole cinnamon stick, which cooked with the dish and infused the whole thing with flavor. We added a few broad ribbons of lemon zest as well to give the tagine a rich citrus back note. Brine-cured olives provided the meatiness and piquant flavor of hard-to-find Moroccan ones, and some dried apricots, which plumped among the chickpeas and broth, created well rounded sweetness for this well-spiced dish. Chopped parsley, stirred in right before serving, was the perfect finishing touch to freshen the flavors.

Adjust oven rack to upper-middle position and heat oven to 350 degrees F. Combine 1 tablespoon oil, garlic, paprika, turmeric, cumin, ginger, and cayenne in a bowl; set aside. Place 1/2 cup chickpeas in a second bowl and mash to a coarse paste with a potato masher.

Pat chicken dry with paper towels and season with salt and pepper. Heat remaining 1 tablespoon oil in a 12-inch oven-safe skillet over medium-high heat until just smoking. Cook chicken skin side down until skin is crisped and well browned, 8 to 10 minutes; transfer chicken skin side up to a plate.

Pour off all but 2 tablespoons fat from skillet (or, if necessary, add extra oil to equal 2 tablespoons). Heat fat left in skillet over medium heat until shimmering. Arrange fennel cut side down in skillet and sprinkle with 1/4 teaspoon salt. Cover and cook until lightly browned, 3 to 5 minutes per side. Push fennel to sides of skillet. Add spice mixture, lemon zest, and cinnamon stick to center and cook, mashing spice mixture into skillet, until fragrant, about 30 seconds. Stir spice mixture into fennel. Stir in wine, scraping up any browned bits, and cook until almost evaporated, about 2 minutes.

Stir in broth, olives, apricots, mashed chickpeas, and whole chickpeas and bring to simmer. Nestle chicken skin side up into skillet, keeping skin above liquid. Roast until fennel is tender and chicken registers 185 degrees, 35 to 40 minutes. Using pot holders, carefully remove skillet from oven. Discard lemon zest and cinnamon stick. Season with salt and pepper to taste. Sprinkle with parsley and serve with lemon wedges.