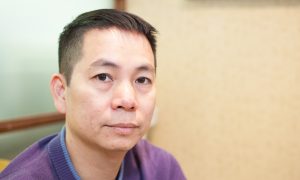 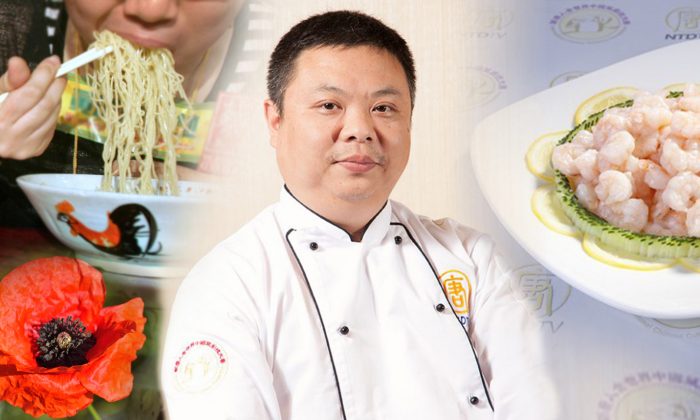 There has been a lot of speculation about restaurants in China spiking meals with poppy shells (da yan ke)—the bud of the plant from which opium is made—to get diners addicted so as to entice them to come back for more.

This shocking rumor was proven to be true by Chef Zhang Hua, the Gold Award Winner for Huaiyang cuisine at the second NTD’s International Chinese Culinary Competition in 2009.

Here’s the inspirational story of how Chef Zhang, who used to co-own Chef Jon’s Chinese restaurant in New Jersey, transformed himself from a mercenary head chef of a restaurant to an honest man dedicated to spreading authentic Chinese culinary art.

In 2009, when NTD Television hosted the 2nd International Chinese Culinary Competition, Zhang seized the golden opportunity and participated in the contest.

“I feel this was an opportunity for me,” said Zhang, who worked as a top chef from several 5-star hotels in Shanghai before coming to the United States, in the documentary Legends Unfolding.

“There’s probably no such competition in China,” he told The Epoch Times in 2008. “Many so-called contests were not very authentic. Any cook could purchase a certificate in such a contest. The competitions were also rarely fair.”

In the competition’s finale held in Manhattan, Zhang whipped up a classic Huaiyang dish called Crystal Shrimp, which requires labor-intensive preparation—constantly soaking and rinsing the shrimps to achieve a crisp texture and a crystalline appearance.

Huaiyang cuisine (淮扬菜)—one of the five major cuisines of Chinese cooking, along with Cantonese cuisine, Shandong cuisine, Sichuan cuisine, and the Northeast cuisine—is derived from the native cooking styles of the region surrounding the lower reaches of the Huai and Yangtze rivers in Jiangsu Province.

Said to be the cuisine of poets and scholars, the high-end Huaiyang cuisine needs intricate knife skills and is meticulously prepared to “retain the original flavor, the freshness, and temperance of food,” according to Confucius is a Foodie.

Zhang’s Crystal Shrimp looked aesthetically pleasing to the eye. His rendition of the traditional Huaiyang dish stood out among the rest and helped him clinch the gold medal in the Huaiyang cuisine category.

“I took home the only gold medal in the Competition,” Zhang said. “I was ecstatic because the traditional Chinese cooking techniques that I learned through years of hard work were not outdated. It is one of the traditional values ​​of Chinese cuisine.”

A year prior, Zhang missed the opportunity to attend the 1st NTD International Chinese Culinary Competition, as he was detained at Pudong Airport by Chinese Immigration on Sept. 28, 2008, for “defying national interests” and “divulging state secrets” just before his departure.

“I did not know that my good cooking divulged state secrets,” Zhang told Minghui.org. “But my mantra has always been to ‘Cook authentic food and be an authentic person.’”

In the 1980s, many people in China were striving to be rich after experiencing years of poverty under the CCP. Like many people who wanted to gain fame and fortune, Zhang started to learn the culinary arts.

“When I was 17 years old in the 1980s, people in China were thinking about how to make money. It was then that I decided to study culinary arts,” Zhang said.

Zhang mastered a rather authentic Chinese culinary art, especially known in Huaiyang and Chaozhou cuisines. Later, Zhang gained fame and fortune after becoming the head chef of a restaurant in Shanghai by his early 20s.

In a society where moral principles and integrity have continued to decline, Zhang saw firsthand how Chinese restaurant owners began to cut corners and introduce deceitful tactics for the sake of earning money.

“In the 1990s, restaurants started to add poppy shells into hotpots to get customers addicted, so that they can earn more money,” Zhang revealed.

Due to bad influences from colleagues and friends, Zhang picked up smoking, playing cards, and drinking.

Though Zhang was in the twilight of his career, he often asked himself: “Is this a happy life?”

Chef Zhang’s heart changed after he learned something precious.

Turning His Life Around

In 1994, Zhang’s mother, who often fell ill since her childhood, stumbled across the book titled China Falun Gong before planning to undergo gallstone removal surgery.

Being a Qigong enthusiast, his mother sought out various Qigong practices to treat her illness. She then went to attend a lecture on Falun Gong in Jinan “with the doubts that this might be a scam like all other Qigong that she tried before.”

Much to Zhang’s surprise, when his mother returned home 10 days later, she looked like a totally different person.

“My father and I were shocked. Wow! She was completely new,” Zhang recalled. “Her illnesses disappeared and she didn’t need the operation anymore.”

His mother’s miraculous recovery also led Zhang to participate in lectures on Falun Gong in Hefei in April 1994.

Amazingly, learning the ancient practice of mind and body, which can be of great benefit to a person’s physical and mental health, Zhang’s life completely turned around.

“When I came back, I also turned into a different person. Master taught us ‘Truthfulness, Compassion, Tolerance.’ That left a deep impression in me,” he said.

“I felt that I should no longer live a purposeless life like what I used to do,” he said.

Zhang lived a wonderful life after practicing Falun Gong. But sadly, his happiness was short-lived.

With an estimated 70 million to 100 million Falun Gong adherents in China, the CCP perceived Falun Gong’s presence as a threat to its authoritarian rule and atheist ideology.

To turn public opinion against Falun Gong, Jiang even utilized the CCP’s overwhelming propaganda machine to disseminate slanderous fabrications about the practice to the international community.

“Since then, millions of people who practice Falun Gong have been subject to wrongful imprisonment, ‘brainwashing’ sessions, and torture, with thousands of deaths confirmed in custody,” the Falun Dafa Information Center states.

“Several experts estimate more than a million Falun Gong practitioners have been killed so their vital organs could be used to fuel a booming organ transplant business in China.”

Zhang, who owned a restaurant at that time, didn’t escape the persecution either.

“I was told the building violated rules and I was not allowed to run the restaurant. Later the police came to the door and told me, ‘If you or your mother come out to attack Falun Gong, we can discuss with you talk about money or cars,’” Zhang recounted.

He continued: “The CCP’s suppression of Falun Gong is very intense. Because I refused to give up my faith, they constantly destroyed my work and damaged my income.”

Despite the vicious persecution that was unfolding in China, Zhang perseveres in his practice of Falun Gong.

He strives to be a better person—and chef.

Adhering to truthfulness, one of Falun Gong’s guiding principles, he told himself to “cook authentic food and be an authentic person.”

“Traditionally, veteran chefs must make a pot of stock by themselves to enhance the taste of the dishes. Nowadays, Chinese chefs generally spend little effort to make stock. The authenticity of taste in food has been masked by chicken essence and MSG,” he said.

In the opinion of Zhang, the modern way of cooking with chicken essence and MSG doesn’t fall into line with traditional cooking techniques.

Zhang explained: “The way of cooking embodies the harmony between humans and nature.”

“Only when you are good at virtue can you understand the subtleties of cooking and present the delicious and authentic taste of the ingredients,” he emphasized.

Zhang never returned to China following his participation in the Chinese Culinary Competition in 2009.

He used to co-own Chef’s Jon on Route 10, Whippany, with three New Jersey women he met during the competition.

The slogan of Chef’s Jon is “Be An Honest Man; Cook Authentic Food.”

“As time changed, traditional cooking techniques are gradually fading,” he said. “I have been immersed in Chinese cuisine for 30 years. I often think about what else I can do.”

Then in 2017, Zhang joined NTD Television’s culinary team as the main chef of Chinese cuisine with the mission of spreading traditional Chinese cooking skills overseas.

“As a chef of Chinese culinary art, I have a responsibility and mission to inherit and pass on traditional Chinese cooking skills and retain the true taste of Chinese cuisine,” he said.

Watch this prize-winning chef’s inspiring life story in the video below: