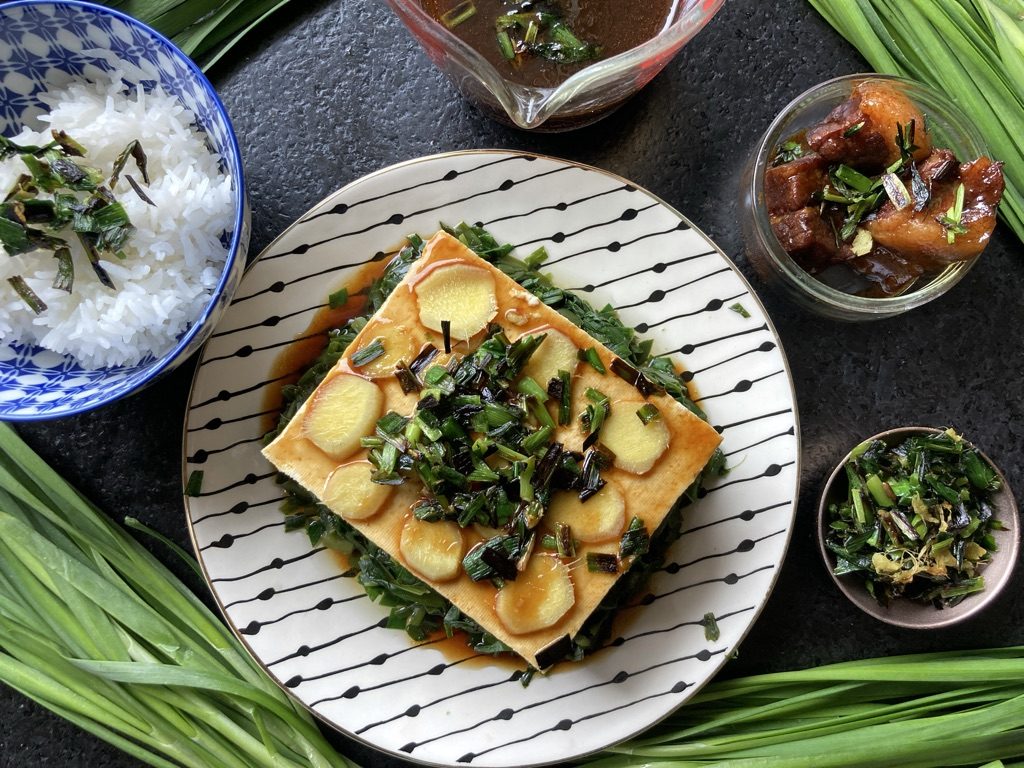 Those in the know celebrate the young, funky alliums as many ways as they can
BY Ari LeVaux TIMEApril 19, 2022 PRINT

I pulled into the Walmart parking lot and drove around the side of the building, far from the doors, where it was relatively quiet. Nancy was waiting beside an older but well-preserved Cadillac when I pulled up. She came to my window.

Nancy handed me a Walmart bag with four thick bunches of chives. I gave her $12 and drove away.

Some of the best deals go down in parking lots. It’s easy and safe to meet up with a stranger in those public, wide-open spaces, while personal vehicles allow for privacy as needed. This early in the season, chives are the only crop Nancy can harvest, and she doesn’t go to the farmers market until summertime when she has more to bring. Instead, she meets up with people like myself, as well as some Chinese clients who also understand the value of her garlic chives. Years ago, she brought the seeds from Northern China, where she was born.

The scientific name for garlic chives is Allium tuberoseum, which means “root garlic” in Latin. It comes from a region that includes northern China, Mongolia, and southern Siberia. Garlic chives are less onion-y than regular chives or scallions, and have more garlic pungency.

Driving home from that Walmart parking lot, the car smelled of sulphrous garlic funk, and I could not have been happier. I opened the window to catch a warm whiff of mud, and the world finally felt like spring. With fresh garlic chives in the bag, I felt a familiar but rusty hankering for a certain egg pancake I always make when I have the means.

I use about a tablespoon each of toasted sesame oil and butter in my finest omelet pan, on medium heat. I chop the bulb end of a handful of garlic chives and add those pieces to the pan. After they cook for a quick minute, I add some well-beaten eggs, which creates a satisfying sputter. Immediately I start shaking the pan to prevent any egg from sticking. After it begins to puff up, I give it a flip to cook the other side. Sometimes my flip is less than perfect and it lands in a crumple, which is fine. I douse it with soy sauce and serve, with a sprinkle of chopped chives from the green end of the bunch.

There are many ways to use garlic chives. Generally people cook with the white ends and use the green ends as a raw garnish. And while there are no rules about how to use garlic chives, there are flavors that go particularly well with them. They include toasted sesame oil, ginger, soy sauce, oyster sauce, and white pepper. Garlic chives also pair exceptionally well with certain proteins, including tofu, fish, pork, shrimp, and of course egg.

For the next few days, I proceeded to feverishly mix and match all of the above. I served it with jasmine rice or instant ramen and some kind of picante, such as hot sauce, sliced jalapeños, or crushed chile. I continued apace until the garlic chives were gone.

It was snowing the next time I met Nancy—this time in front of the AMC, which was much more chill than Walmart. I pulled my Subaru next to her Cadillac. On the edge of the parking lot, two gentlemen in pickups were transacting a chainsaw.

On the way home, a violent wind drove the snow sideways. Or maybe it was the way I was driving. This time, I focused on steamed fish with ginger and garlic chives, a recipe for which there are many variations. The sauce, made from sesame oil, sugar, rice vinegar, soy sauce, oyster sauce, and white pepper, forms a magnificent bridge between the chives, ginger, and protein.

Once I got my recipe for fish with chives figured out, I tried it with an uncut brick of tofu. The soft, blank flesh of the bean curd combines magically with the intensely flavored sauce. I figured I had hit peak garlic chive cookery. And then I modified the recipe for pork belly.

I spent the night this way, hunched over a bowl filled with various permutations of the proteins and flavorings that go well with garlic chives. When the proteins finally ran out, I kept going with little more than plain rice topped with fried garlic chives and ginger, and the remains of the sauce. It was just as satisfying without the proteins because by then all I really wanted was that combination of chive, ginger, and Asian spices.

I’ve included alternative instructions for preparing the dish with pork belly as well as tofu and fish.

On the plate that will go into a steamer, make a gentle mound from the chopped green end of the bunch of chives. If using tofu or fish, place your protein atop the chopped garlic chive greens. (For pork belly, see notes below.) Liberally sprinkle a teaspoon of salt upon and around the protein, and then lay the slices of ginger on top. Place the plate in the steamer and cover it with a tight-fitting lid. Steam the protein for about 20 minutes.

While the protein steams, get the sauce going. Add the soy sauce to a pan, along with the water, sugar, rice wine, rice vinegar, oyster sauce, white pepper, and 1 tablespoon of the toasted sesame oil. Heat to a simmer and keep it there for about 10 minutes, then turn it off.

Finally, heat the remaining tablespoon of toasted sesame oil in a pan over medium heat. Fry the grated ginger and the chopped chive whites, along with any other chive odds and ends that might be lying around, and a teaspoon of salt. Cook slowly for about 10 minutes, stirring frequently, until the chives have dried and turned a bit brown.

To serve, lay the tofu or fish on a bed of rice. Drench with sauce and then sprinkle with the fried ginger-chive mixture.

Notes: If using pork belly, you’ll want to cook it in the sauce, rather than steaming it over the chive greens. Cut the pork belly into cubes about an inch on the side. After the sauce has simmered for 10 minutes, add the pork, along with a star anise pod, 1 teaspoon coriander, and 1 cup water. Simmer for 2 hours. Proceed with the recipe.