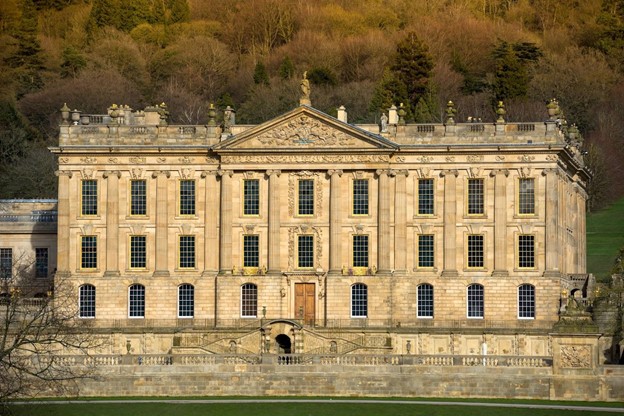 The main west façade was the original front entrance. A rhythm of Ionic pilasters and columns are centered around the pediment, the triangular roof element. It's believed to have been a collaboration of the first duke and architect Thomas Archer, who had taken the Grand Tour and was inspired by Italian Baroque architects. (Chatsworth House Trust)
Arts & Tradition

Larger than life: Art that inspires us through the ages
BY James H Smith TIMEMarch 8, 2022 PRINT

Chatsworth, located in central England, comprises gardens and woodlands, pavilions and bold water features, and holds a stately Baroque mansion. The mansion was built in 1552 by Sir William Cavendish with the driving force of his wife, Bess of Hardwick, who at the time was the second most powerful woman in Elizabethan England, after the queen.

The main house is a rectangularly planned 25-room mansion with a central courtyard; the moorland ridge forms a backdrop to the building, which looks out over a garden terrace in the back and the River Derwent in front. The house was originally designed in the Tudor style; however, it was renovated around the turn of the 17th century with a new Baroque exterior, notably the northern and western façades designed by architect Thomas Archer. The mansion’s façades are decorated with carved stonework, a roofline balustrade topped with torch and banner sculptures, and window frames highlighted with gold leaf that reflect the setting sun.

The Painted Hall greets guests in a dramatic scene depicting the life of Julius Caesar. Guests can climb the stairs to the staterooms above—a sequence of highly decorated chambers. The house was extended in the early 19th century, adding a north wing consisting of a great dining room, a sculpture gallery, and a number of service rooms culminating in the North Tower. It holds a ballroom that later became a theater.

The grand Baroque estate, inspired by Greek and Roman styles, has nurtured and entertained 16 generations of Cavendish and continues to do so. From the outset, the Cavendish saw the estate as part of the community and have welcomed the general public as guests to enjoy and revel at this fine example of classically inspired culture.