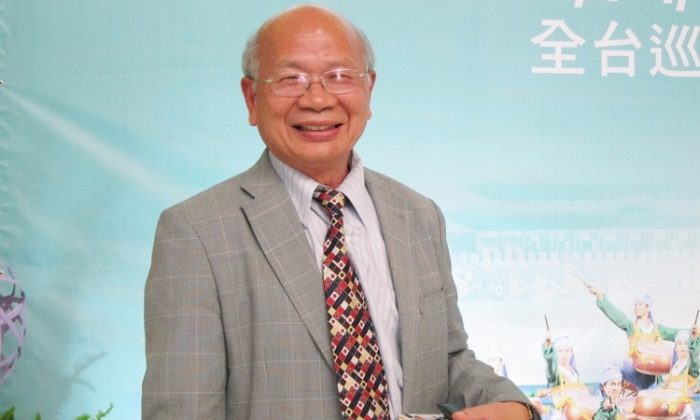 TAICHUNG, Taiwan—Watching Shen Yun every year has become a trend among business owners in Taiwan.

Mr. Gao praised Shen Yun’s creativity in incorporating modern technology into their performances, saying that the backdrops really brought the stage to life. But even more, he applauded Shen Yun’s efforts in reviving Chinese traditions.

“Shen Yun’s preservation of culture is commendable,” he said. “If all we care about is money and big business, we’re just sending ourselves down into an endless spiral.” He said that as a businessman, he would often enrich his mind through traditional Chinese texts, such as the works of Confucius and the Romance of the Three Kingdoms, published in some Japanese magazines.

As practitioner of the Japanese martial art of Aikido, Mr. Gao expresses admiration for the dancers’ solid technique and believes it to be a rare gem amidst modern society’s obsession with instant gratification.

“Take a tree for example,” he said, explaining his observation, “Where branches and leaves emerge, there are certainly roots growing underneath. Now in the modern era everyone wants to have ‘leaves,’ yet few are willing to ‘take root’ because those are the parts that no one can see.”

Shen Yun dancers, on the other hand, are much more than the choreography and costumes, said Mr. Gao. “This is not just a few years’ effort. It takes years and years of hard work to achieve something like this.”

Mr. Gao was also deeply impressed by the dancers’ coordination and teamwork, and adds that it was an inspiration to his business career.

“After years of attending and appreciating Shen Yun performances, these fans will embody Shen Yun’s principles and become “Shen Yun People.” The number of such people will increase such that they will form a shared-value community,” Mr. Gao explains.

Mr. Gao believes that, inspired by Shen Yun’s moral messages, fans of Shen Yun will naturally conduct themselves in an upright manner.

Another international company president praised Shen Yun performance: “There’s no word to describe it. It’s infinitely good!” said Lin Meilian, president of Globe Lady. She has seen Shen Yun for consecutive eight years with her husband. Sometimes seeing Shen Yun twice a year, Ms. Lin said, “We look forward to Shen Yun’s coming every year, and enjoy the artistic and spiritual feast it brings to us.”

“It touches one’s whole being!” Ms. Lin explained the drive for them to see Shen Yun every year is their being touched when watching the performance. “It is indescribable. You can only come see the show and feel it personally.”

“Every program moves my heart, because there is so much infused in Shen Yun.” Ms. Lin and her husband feel Shen Yun brings the audience the beauty of all kinds—which moves them profoundly, she describe Shen Yun as “infinitely good.”

The couple praised and appreciated Shen Yun, hoping it will spread to every corner of the world. They hoped the ‘truthfulness, compassion, and forbearance’ will be in the hearts of all people.”

One of A Kind in the World

“It’s one of a kind in the world—absolutely world number one,” said Mr. Xiao Wenlong, chairman Fu Wei Technology Group and the president of Taiwan Association of Machinery Industry.

“The backdrops and colors in Shen Yun are incomparable.” Watching Shen Yun for the third time, Mr. Xiao was excited, “I like it and want to see it again every year.”

“There are many stories represented in the performance. It is very inspiring and touching,” he explained.

Inspired by the performance, Mr. Xiao relates it to business management. “[An employer] should manage employees through their hearts, take care of their hearts.”

“This is a superb performance.” Mr. Xiao said that Shen Yun will influence the society profoundly, “because it encourages people to do good deeds, go upward, and be compassionate, and shows people there is justice in this world. After seeing the show, people will work hard toward the direction [of goodness] from their hearts.”

Shen Yun ‘Did bring us hope’

“The fact that we can come here and see Chinese culture that we cannot see in China, is really very important.”

He thought the hi-tech animated backdrop added meaning to the story-based dances. “This has very good feeling and meaning to all the stories,” he said.

Summing up his experience of classical Chinese dance he said,

“It is very different and very exciting to watch.”