CEO: Shen Yun’s Energy Made Me ‘Peaceful and Balanced’ 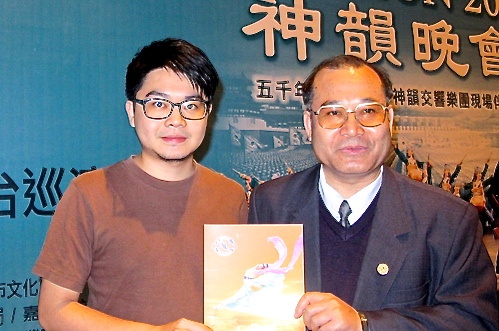 KAOHSIUNG, Taiwan – Chen Bo-Yu booked not only his but his families’ and friends’ tickets to Shen Yun Performing Arts’s performance six months ago. This was his second time watching Shen Yun at the Cultural Center, and he was again surprised and amazed by the exquisite performance.

Mr. Chen is the CEO of Jiechu Cultural and Educational Institute. He received Best Teacher Award of the nation in 2001.

An evening of Shen Yun is comprised of about 20 short dances, some of which tell stories from China’s legends, its actual history or the present day.

The story in The Power of Compassion inspired Chen. He said that he felt the pure and righteous energy of compassion. “There is a lot of violence in society nowadays and this story promotes ‘good for evil.’ This kind of compassion is precious and hard to do. Shen Yun presents this spirit in a luxurious art form, which allowed me to quickly receive that energy and become peaceful and balanced.”

New York-based Shen Yun endeavors to bring back China’s traditional culture through excellence in dance and music that reflects the true principles and values of the country’s ancient heritage.

Accompanying the dances is an orchestra in which East meets West and traditional Chinese instruments join those from a Western symphony.

“The music and the atmosphere are sometimes dynamic and sometimes slow and smooth. Sometimes I closed my eyes to enjoy the music. I feel serenity. When I opened my eyes to see the dancing and special stage effects, it was a totally different kind of inspiration,” he said.

At Shen Yun’s seventh performance at the Kaohsiung Culture Center, a matinee on March 8, was a full house. President of AMOSENSE CO., LTD. Huang Yu-Wen felt excited and touched by what she saw, as if her long lost memories had returned.

“My senses, my eyes, ears, nose, tongue, my mind and body have gained a sense of contentment at the highest level,” Ms. Huang said excitedly. “Because the choreography, stage setting, dances, as well as live music are integrated with one another very, very, very well.”

Ms. Huang praised Shen Yun for its efforts to promote ancient Chinese culture through arts. “With features of [Chinese culture] presented in the form of arts, everything, whether musical performance or the dance of performers, is done with accuracy and excellence.”

She was touched to the point of tears at sight of the Buddha and Bodhisattva descending down to earth, as they do in one of the dances.

“There is a segment of the show that really touched me. Greatly moved, I was even in tears during the show,” Ms. Huang said, impressed with the dignity of the heavenly world presented in Shen Yun.

Admiring the ideals of Truthfulness, Compassion and Tolerance that Shen Yun presents, Ms. Huang had a deeper understanding of human nature. “In fact organisms have to return to their true nature. Human nature is originally based on truthfulness. It’s because we are polluted by greed in the process of growing up that the sincere and genuine part of our human nature is covered up. But it should be awakened by ‘Truthfulness, Compassion, and Tolerance.'”

Mr. Chang Fu-Sheng, chairman of Tang Eng Iron Works Co., and his wife, also saw the seventh show at Kaohsiung Cultural Center, along with other executives and their families.

“It is a perfect combination of art and culture. The performances of modern and ancient stories display 5,000 years of Chinese culture and history. This is an excellent performing arts group,” Mr. Chang said.

Mrs. Chang was also filled with joy. She said, “Shen Yun is unparalleled! This is my first time to see such a perfect show.”

Mr. Chang added that Shen Yun show is so magnificent that it can purify people’s souls: “I’ve never seen such an extraordinary performance where every program disseminates the message of human compassion. Nowadays, society is full of fickle values, and sometimes it’s hard to differentiate good from bad. I think this show can purify people’s soul to a certain extent.”

Amazed by soprano Haolan Geng’s voice, he said, “Talking about vocal music, I’ve rarely heard such a good soprano. Her lyrics mainly conveyed divine messages of sincerity, compassion, and beauty. So, I felt that she tended to deliver divine messages to us.”

“Everyone has a transient life in this world, and in the end, we all still have to return to another realm belonging to divine,” said Mr. Chang.