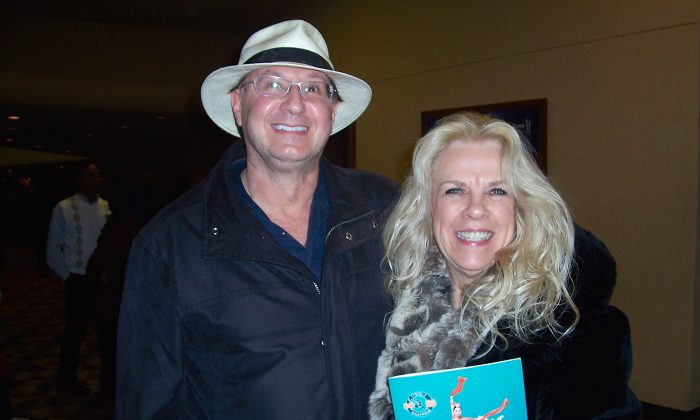 Mr. Feinberg, CEO of a dental and medical technology company, was impressed with the show’s spirituality.

“We see a lot of spirituality in this dancing,” he said. “We’re dancers ourselves, so we see this, and we can connect with this very easily.”

“I like the idea of compassion, too,” Ms. Thrush added.

In the storytelling segment of The Power of Compassion, the audience sees a compelling story of compassion in the face of persecution.

“Even though they were being mean to them,” Ms. Thrush said, “you don’t reply in kind—you change, and be compassionate back. It’s a very good message.”

Classical Chinese dance has a history of thousands of years. The Shen Yun website tells us, “Soaking up profound wisdom from every era and dynasty, it has become a complete system of dance embodying traditional aesthetic principles with its unique dance movements, rhythms, and inner meaning.”

“It’s a nice connection between the two of them,” he said, “we see how all it all ties together.”

Being a dancer himself, Mr. Feinberg said, “We understand, being dancers, how much work actually goes into this, how difficult it is.”

“Its very, very pretty! Poetic, and it’s interesting just to watch,” Ms. Thrush said. “The costumes were so beautiful, and the unity and the uniformity, to be able to dance like that—we know how much work that takes to do it in unity. So it’s beautiful to watch that.”

Shen Yun also enlivens each dance with a digital backdrop. “With state-of-the-art graphics technology, Shen Yun’s digital-backdrop team creates vividly animated settings, extending the stage and transporting the audience to a world where heaven and earth are one,” according to Shen Yun’s website.

“We loved the ones coming out of the screen,” said Ms. Thrush, referring to some of the pieces where the dancers appear to leap from the backdrop to the stage. “It’s so fun!”

“The music was so beautiful, too,” said Ms. Thrush.

“Many of our friends are in orchestras and on stage,” he said. “We’ll tell them to come see it.”

“Come see it, because it’s like nothing they’ve ever seen,” said Ms. Thrush.