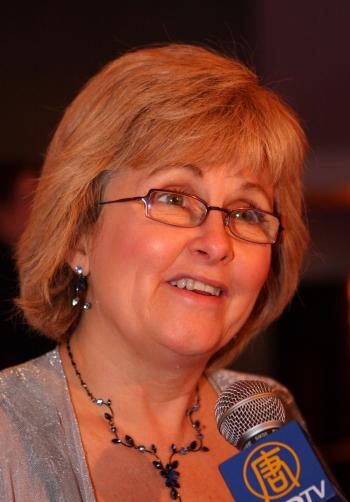 She said she could tell that “there’s a deep spiritual element to the whole performance and I know you have been touching the hearts of many. The spirit of hope, the spirit of beauty, the spirit of the blessing that you are bringing to the world through this performance is a fabulous gift to us.”

In addition to teaching part time at a university, Ms. McKenna gives workshops in Gaelic language and song from Scotland. She said the DPA show inspired her to finish a composition she is working on and also to consider translating her song lyrics, which are in Gaelic.

“It was so beautiful the way you translated the songs, because I sing in Gaelic and I never usually translate. But you’ve inspired me to think in other ways to reach people’s hearts, not just through the music but through the words. I was studying the words of the songs and listening to the messages. I was taking it all into my spirit and it really touched my soul as well as my heart and [did the same for] the people we were sitting with. We had a beautiful experience.

“From a teacher’s heart and from the heart of an artist myself, I’m really impressed—beyond words. There are no words to describe how amazing this is.”

The New York-based DPA is composed of a unique group of leading artists who share in a vision of reviving Chinese traditional culture which was all but destroyed under communist rule.

“In all cultures we have some not good things and some wonderful things, in all cultures,” said Ms. McKenna. “But what happened was that they tried to destroy everything. They destroyed the heart and the spirit of China and I believe this [show] is reviving that and is teaching people the beauty of their ancestral heritage.”

Through her music, she said, she, too, endeavours to do her bit to help keep the Gaelic language alive.

“There are only 60 thousand Gaelic speakers left, our culture is dying and I’m inspired by this [show] and thinking, ‘Gosh how can we do something much smaller but to inspire people about the beauty of our heritage.’”

Ms. McKenna was moved by “Dignity and Compassion,” a dance piece about Falun Gong, a meditation practice with roots in ancient Chinese culture which is currently being persecuted by the Chinese regime.

She was also impressed with the last piece in the show, “Knowing the True Picture Offers Ultimate Hope.”

Ms. McKenna concluded by saying she’d like to see the show again, and bring along family and friends next time.