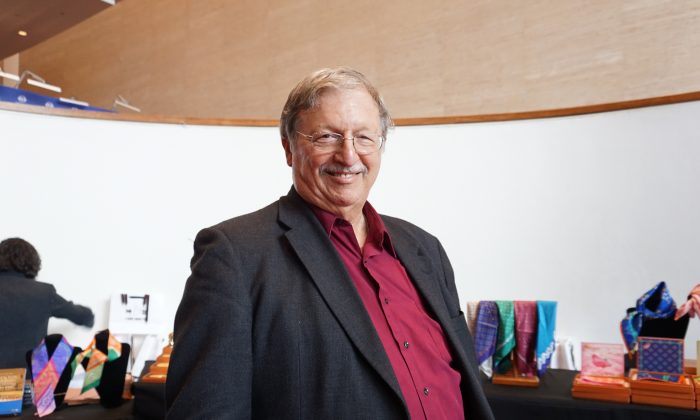 HOUSTON—Alex Pancheri is a lifelong musician. He has taught cello for 55 years in schools, led orchestras, conducted, and still performs cello himself in a local orchestra.

So when he saw Shen Yun Performing Arts on Jan. 1 at the Jones Hall for the Performing Arts in Houston, he had special praise for the unique orchestra accompanying the dances.

“When I see things like this, I understand exactly what they had to put in,” Pancheri said. “It’s just hours and hours and days and years.”

New York-based Shen Yun’s orchestra performs completely original pieces to go along with the 20 vignettes of classical Chinese dance, ethnic and folk dances, and story-based dances the artists perform on stage. Between the live music and the animated backdrop that makes it seem as if the artists are jumping from stage to sky, the synchronicity is something to be behold.

“To get everything synchronized with the music and getting it jumping down and going back … and all that, it is just an amazing amount of time,” Pancheri said. “It absorbs your life. But it is what they love, and it is why they do it.”

The passion of Shen Yun’s artists came through on stage, he said. “They would not do that otherwise.”

Shen Yun was formed in 2006 by a group of award-winning artists, many who had left China, to revive the authentic traditional Chinese culture and share it with the world through the arts. To do this, the artists use classical Chinese dance, which has been passed down and refined over thousands of years through each dynasty. It is with this expressive art form that Shen Yun takes audiences on a journey through 5,000 years of history and culture, myths and legends.

The music not only enhances this, but does its own work in painting the picture of the story, according to Pancheri. Whether it is the Mongolian grasslands or the Tang Dynasty palaces, the music would make that image come to life.

Though the instruments in the orchestra pit were largely the same you would find in any classical Western orchestra, the sonic world was immediately recognizable as something Chinese.

“It’s just beautifully done,” Pancheri said. There were also instruments like the Chinese lute, or two-stringed erhu, blended right into the woodwinds and strings despite being very different types of instruments, and Pancheri said the combination “with the orchestra fits beautifully.”

It was something he hoped his fellow musicians would be able to experience first hand, as there is no replacement for hearing something with your own ears.

“I think it’s special,” Pancheri said. “This is the first time I’ve been here, and I’m likely to come back.”

With reporting by Sally Sun and Catherine Yang.