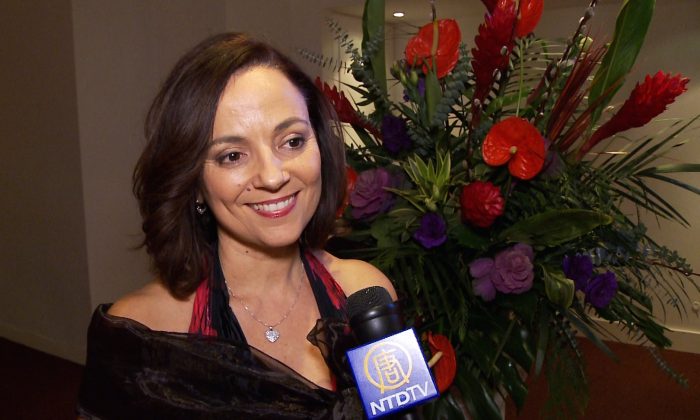 Celebrity chef Christine Cushing got a taste of classical Chinese dance and music at Sony Centre on Jan. 22, and was blown away.(Courtesy of NTD)
Arts & Culture

TORONTO—Celebrity chef Christine Cushing has been showing Canada how to cook for almost 15 years.

She experienced the unique flavour of classical Chinese dance and music for the first time on Jan. 22 at Shen Yun Performing Arts, and was blown away.

“In the soft moments, the quiet moments, and the energetic moments, you really are transported—it’s really beautiful.”

“What I’ve learned tonight is that there is a lot of artistry and storytelling in the Chinese culture,” she said.

“When people talk to me about food I always tell a story because I think that through a story you get to know people—and that’s what I got a sense of. I got a sense that every single dance, every performance had a story. As an audience member I feel right away connected. It was really amazing.”

Ms. Cushing was also delighted with Shen Yun’s many ethnic or folk dances, selected from the 55 ethnic minorities in China. The performance featured dances of Mongolians, Tibetans, the Hmong people of southern China, the Li ethnic group of Hainan Island and the Yi of Yunnan province.

“I really learned that [China] is so broad and so diverse,” she said. “When you saw the Mongolian dancers, for example, compared to the Li folk dance, it’s so different and it really gives you a sense of how vast the country is—that really its so different from corner to corner.”

“This performance really echoed that for me, and made it much bigger than I ever thought that it could be.”

“You see the snow-capped mountains, the sea, the tropical—that was spectacular,” she said, adding the costuming was incredible.

“I loved the colours—the costumes are magnificent. Just the use of bold, beautiful colour—Fantastic.”

Traditional Chinese culture and art forms—informed over millennia by the three pillars of Buddhism, Daoism and Confucianism—were largely destroyed during the Cultural Revolution and decades of suppression by the communist regime, says the Shen Yun website.

The values of this rich culture—such as compassion, sincerity, honesty and harmony—rang true and have a universal, enduring power said Ms. Cushing.

“It also shows us that we’re all really alike [around] the world,” she said.

“We always talk about how different people are but I tend to think that we’re actually much more alike. So to sit there and feel so strongly about that, even though I knew very little about [Chinese culture], really shows that—with music, with song—it really brings us together and it’s really very memorable for me.”

The mission to re-awaken the spiritual culture, and preserve cherished art forms wove through every aspect of the performance, said Ms. Cushing.

“I feel that it’s a great effort—I could really sense the spirituality behind it,” she said, adding she felt this represented the authentic Chinese culture.

“I really got a sense that this period that we know China for now, is so brief compared to such a vast history before that.”