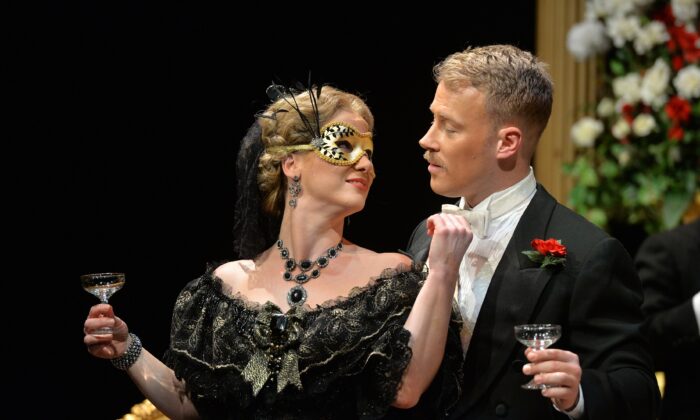 Celebrating the New Year at the Operetta

TORONTO—Celebrating New Year at the operetta is a beloved European tradition and it has also become a favourite of many Canadians. This is particularly true for Torontonians who are fortunate to host the only dedicated operetta theatre company in the country—the Toronto Operetta Theatre (TOT).

At the intersection between opera and musical theatre, the operetta art form combines singing, dancing, and comic stories in light-hearted performances for people of all ages.

Since its inception, the TOT has presented many beloved operetta hits, ranging from Johann Strauss’s “Die Fledermaus” to Gilbert and Sullivan’s “The Pirates of Penzance,” and Franz Lehar’s “The Merry Widow.”

“Going to operetta is fun. If you find yourself in the mood for melody, comedy, romance, and a great dose of suspension of disbelief, then TOT is the place to go,” says the company’s general director Guillermo Silva-Marin.

It is also a wonderful opportunity to discover talented singers.  This has in fact been an important mission for Silva-Marin, who founded the company in 1985. He himself was a successful opera singer when he decided to dedicate himself to management and directing.

This December/January, the TOT is reviving the 19th-century favourite “The Gypsy Baron” by Johann Strauss.

At the threshold between operetta and light opera, “The Gypsy Baron” premiered in Vienna in 1885 and has since become a staple of European repertoire, alongside Strauss’s other masterpiece, “Die Fledermaus.”

“Whether placed on the operetta stage or the opera stage, ‘The Gypsy Baron’ resonates as pure and powerful entertainment anywhere in the world,” says Silva-Marin.

The storyline involves a number of colourful characters, secret identities, romance, intrigue, and a buried treasure that brings the audience moments of laughter and drama.

“The music is extraordinary beautiful and the storyline remains compelling. It’s all to do with daring to believe in a prosperous future, finding true love, and approaching life with nobility of spirit,” says Silva-Marin, who is also directing the production.

This is the third time that the TOT is reviving the production in its 34-year history. The first two were in 1990 and 1999. Silva-Marin says it was time for “The Gypsy Baron” to make a comeback in Toronto.

“Johann Strauss, the Waltz King of all of Europe, was renowned for his gift of melody, his ability to make us dance and sing and his amazing sense of the theatre. ‘The Gypsy Baron’ is no slouch when it comes to a tune, and the score has so many it is impossible to mention them all,” he says.

“As an art form, operetta was the great beneficiary of the Austrian Waltz King,” he says.

Torontonians will no doubt enjoy “The Gypsy Baron” when it returns this Saturday, just in time to usher in the New Year.