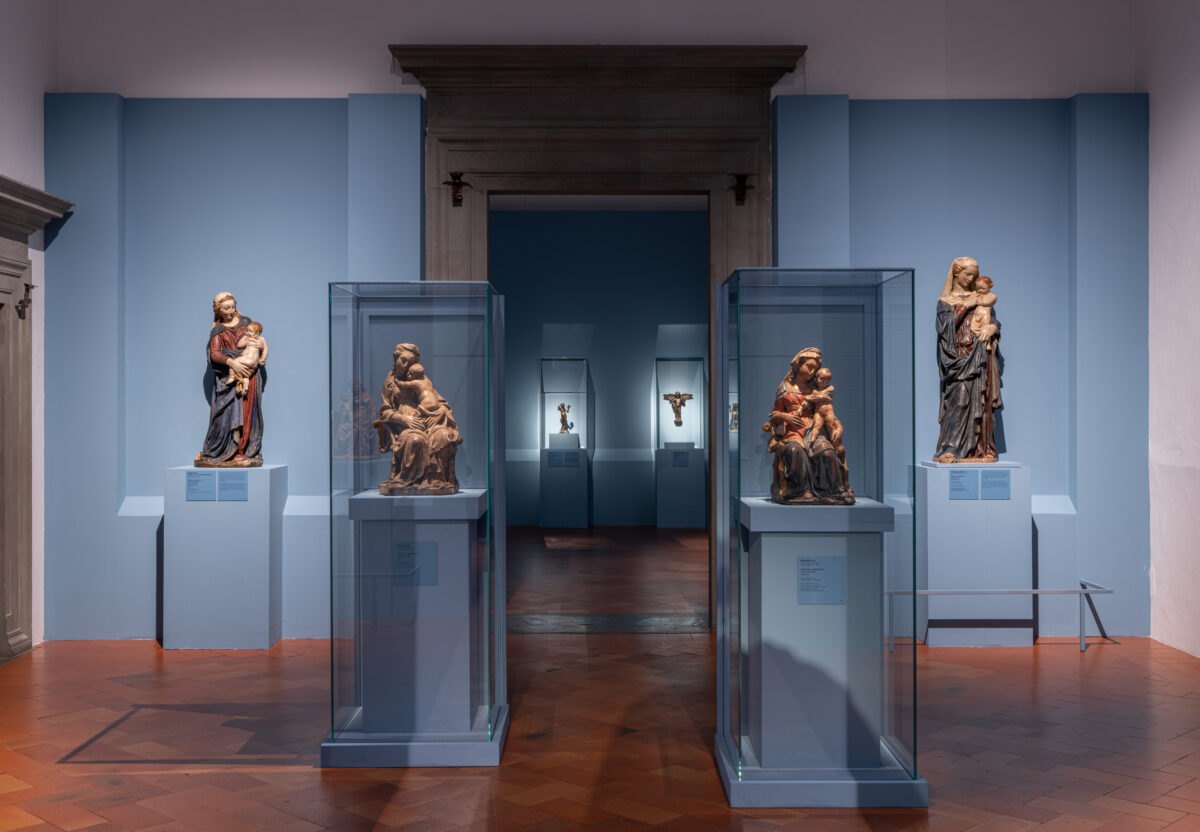 Donatello's terracotta madonnas in the Palazzo Strozzi as part of the "Donatello: The Renaissance" exhibition in Florence, Italy. (Ela Bialkowska/OKNO Studio)
Arts & Tradition

Craftsmen should trace the greatness of art to one man, according to 16th-century art historian Giorgio Vasari in his book “The Lives of the Most Celebrated Painters, Sculptors, and Architects.” That man is the Italian sculptor and architect Donato di Niccolò di Betto Bardi, whom we know as Donatello.

Donatello, along with his friends and peers—the painter Masaccio, the architect Filippo Brunelleschi, and architect Leon Battista Alberti—created the Renaissance style in Florence.

Donatello’s work is still far-reaching. To put his prolific work into a comprehensive story is one thing, but to put on a show that encompasses his wide-ranging impact seems an impossibility. Yet the exhibition “Donatello: The Renaissance,” at the Palazzo Strozzi and the Museo Nazionale Del Bargello in Florence, Italy, does just that.

Some 130 sculptures, paintings, and drawings lent from over 50 world-renowned museums and institutions are in the exhibition. There are some remarkable exhibits, such as the bronze doors from the Old Sacristy in San Lorenzo Basilica, in Florence. It’s the first time the doors have left the building.

There’s much to discover in the show, but here are a few key works of art showing some of Donatello’s innovations.

The Victoria and Albert Museum’s “Dudley Madonna” is one of the finest examples of Donatello’s stiacciato technique. “Stiacciato” (Italian for “flattened out”) is a low-relief sculpture with shallow carvings almost like a drawing.

Inspired by a woman carved on an ancient funerary stele, Donatello rendered the Virgin in her entirety on a plain, unframed background. It was the first time the Virgin’s full figure had been made in marble for private devotion. Shown in profile view, she embraces the Christ child with a mother’s love, but her gaze suggests that she knows of the sacrifice he will have to make as a man.

Pliny the Elder in his “Naturalis Historia” illustrated how the ancients once made terracotta artworks. Donatello and Brunelleschi, inspired by the medium, used terracotta to create figures.

Donatello tended to use terracotta to create madonnas for private devotion; some examples can be seen in the exhibition.

Such small-scale pieces differed from Donatello’s terracotta statue of “Joshua” on the dome of Florence Cathedral. Over 16 feet tall, it was once the gold standard for all dome-buttress statues. Donatello was commissioned to create “Joshua” in place of his marble “David,” which at less than 6 feet tall was deemed inadequate for the task. Exposed and beaten by the elements, “Joshua” stood on the dome for over two centuries before it disappeared.

Donatello rendered a remarkable narrative scene in “The Feast of Herod” for the Baptistery in Siena. For the first time since 1427, the gilded bronze work has been removed from its baptismal font, along with the gilded bronze figures of “Hope” and “Faith,” which have all been restored for the exhibition.

For “The Feast of Herod,” Donatello used Brunelleschi’s new rules of perspective to heighten the drama and tension of the scene, which plays out through a series of boxes much like a storyboard. The violence is tangible throughout, as Donatello’s characters recoil in shock, horror, and disgust at seeing the head of John the Baptist. Donatello gave each person character, gestures, and emotion—a bold step at a time when the graceful, and two-dimensional idealized figures of the International Gothic style of art reigned supreme.

He also used perspective to ensure that his works were accurate from any viewing point. Set high atop a column 6 feet, 6 inches tall, Donatello’s bronze “David Victorious” must have been a sight to behold. The statue’s original column was lost long ago in the 16th century, but the exhibition curators have raised the work up high, although lower than the original, so visitors can see the piece from below as Donatello intended.

A Breath of Humanity

As the father of modern sculpture, Donatello carved the impossible: humanity itself. He made static lifelike sculptures that were alive with movement, vitality, and sensibility—something never before seen.

Donatello’s innovative ideas ran across multiple media in stone, wood, marble, bronze, stucco, terracotta, ceramics, papier mâché, glass paste, and embossed copper. While he made new discoveries, giving artists exciting new ways to work, he always looked to the past for inspiration: from the ancient Greeks and Romans to artists of the late Middle Ages, such as Giotto.

Donatello’s art impacted artists across Italy from the regions of Tuscany, Veneto, and the Marche to the cities of Rome and Naples, a feat that only Giotto achieved before him.

The “Donatello: The Renaissance” exhibition runs until July 31, at the Palazzo Strozzi and the Museo Nazionale del Bargello in Florence, Italy. To find out more, visit PalazzoStrozzi.org

The exhibition is curated by Francesco Caglioti, professor of medieval art history at the Scuola Normale di Pisa.

The exhibition will also be shown at the Staatliche Museum in Berlin, and the Victoria and Albert Museum, London. Each venue will show a slightly different version of the exhibition, with some loans differing.