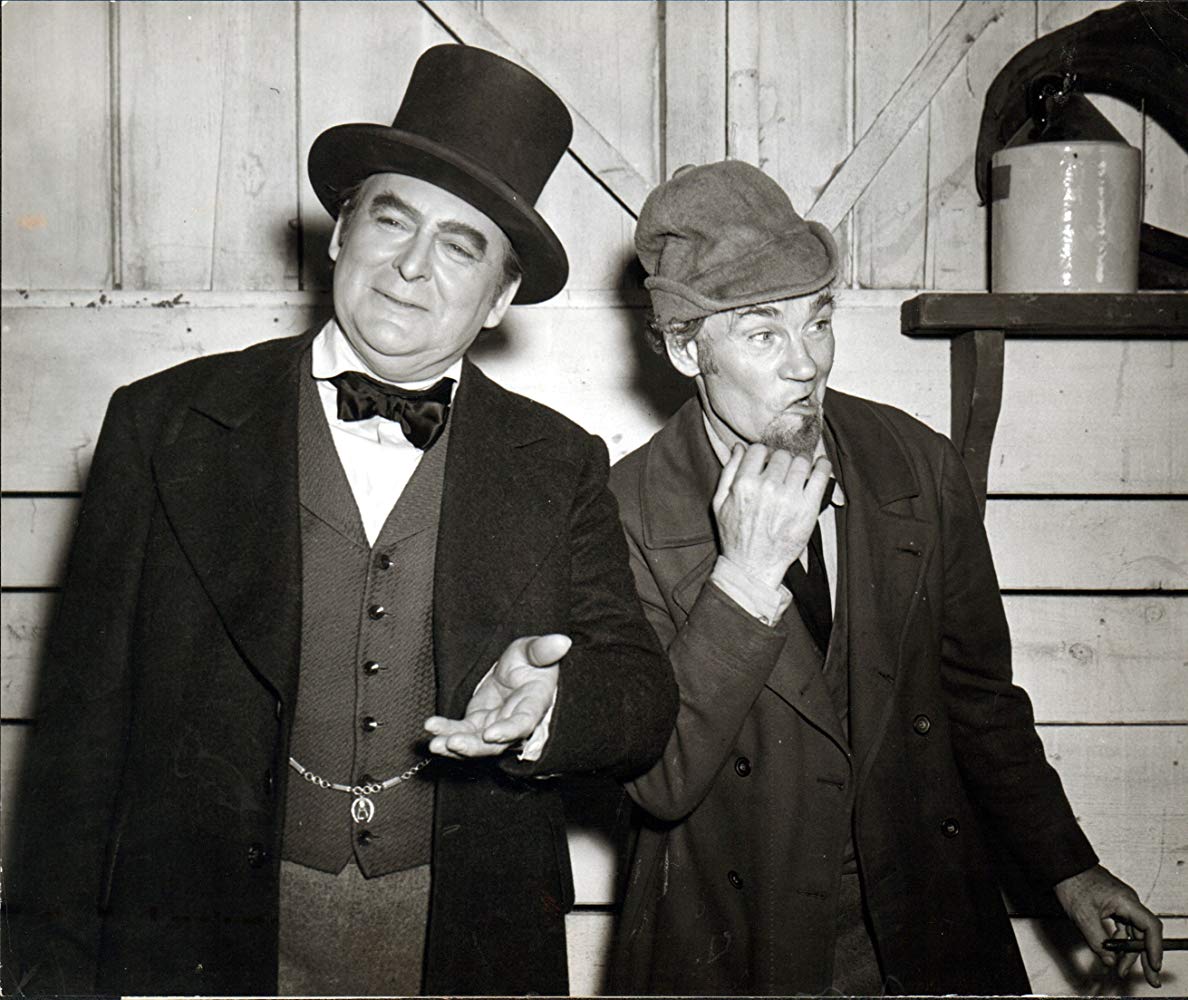 Edward Arnold (L) as Daniel Webster and Walter Huston as Mr. Scratch in the 1941 film “The Devil and Daniel Webster,” originally titled “All That Money Can Buy.” (RKO Radio Productions)
Books

Celebrating America: The Poetry of Rosemary and Stephen Vincent Benét

When I was around 9 or 10 years old, my family was visiting my mom’s parents, who operated a dairy farm in Pennsylvania. The house owned by my grandparents was nearly 200 years old, and at night the shadows in the rooms, the dim-lit stairs, and the creaking floorboards often fired up ghosts in the imaginations of those of us in the younger set.

Those terrors doubled one evening after we watched a televised version of “The Devil and Daniel Webster,” the story of a New England farmer, Jabez Stone, who sells his soul to the Devil for seven years of prosperity. If memory serves, the show was in black-and-white, and it left me in bed that night staring into the darkness for what seemed an eternity, terrified to close my eyes and sleep.

It wasn’t until I was a teenager and reading one of my father’s college anthologies that I realized the writers for that show had taken the script from Stephen Vincent Benét’s story by the same name. I read and reread that story, not for the horror but for its rich portrayals of men like that famous orator, politician, and son of New Hampshire, Daniel Webster, who defends Jabez Stone in a trial against the Devil, and of the villains whom Mr. Scratch—New Englanders frequently referred to the Devil as Old Scratch—summons for a jury, including Edward Teach, known popularly as Blackbeard.

For many years, I took no more interest in Benét until when in my teaching days, I began stumbling across his other work, mostly his poetry.

I read his most famous book-length poem about the Civil War, “John Brown’s Body,” which won him a Pulitzer Prize for Poetry in 1929. And I looked at “Western Star,” another book-length Pulitzer-winning poem unfinished at Benét’s early death from a heart attack.

Benét (1898–1943) was a writer who both loved and critiqued America. In this short poem, for example, he introduced Daniel Boone to my children,  and later to my grandchildren:

When Daniel Boone goes by, at night,
The phantom deer arise
And all lost, wild America
Is burning in their eyes.

When I taught American history to seminars of homeschoolers, we usually kicked off the year with Benét’s “The Ballad of William Sycamore,” a rollicking poem about a pioneer and his place in the history of the movement west. Too long to include in its entirety here, let’s look at the first three stanzas of this ballad:

My father, he was a mountaineer,
His fist was a knotty hammer;
He was quick on his feet as a running deer,
And he spoke with a Yankee stammer.

My mother, she was merry and brave,
And so she came to her labor,
With a tall green fir for her doctor grave
And a stream for a comforting neighbor.

And some are wrapped in the linen fine,
And some like a godling’s scion;
But I was cradled on twigs of pine
In the skin of a mountain lion.

Sharp Names That Never Get Fat

In poem and story, Benét celebrated America and Americans. Here are the first and last stanzas of “American Names.”

I have fallen in love with American names,
The sharp names that never get fat,
The snakeskin-titles of mining-claims,
The plumed war-bonnet of Medicine Hat,
Tucson and Deadwood and Lost Mule Flat.
…
I shall not rest quiet in Montparnasse.
I shall not lie easy at Winchelsea.
You may bury my body in Sussex grass,
You may bury my tongue at Champmedy.
I shall not be there. I shall rise and pass.
Bury my heart at Wounded Knee.

Benét also wrote “The Sobbin’ Women.” This short story was based on the legend from ancient Rome about the capture of the Sabine women by the Romans, and Benét set it on the American frontier. Hollywood later made this tale into the 1954 film “Seven Brides for Seven Brothers.”

In 1921, Benét married Rosemary Carr (1898–1962), who was also a writer and a poet, and who after her husband’s death strove to keep his reputation alive. The husband-and-wife team collaborated on “A Book of Americans,” a look at various figures from American history that can be enjoyed by children and adults alike. This volume contains Rosemary Benét’s well-known “Nancy Hanks,” with this enchanting opening stanza:

If Nancy Hanks
Came back as a ghost,
Seeking news
Of what she loved most,
She’d ask first
“Where’s my son?
“What’s happened to Abe?
“What’s he done?”

At the Poetry Foundation, John Griffith offers an excellent sketch of Benét and his literary contributions. Two details in this account are striking.

First, as Griffith points out, from 1928–1943, Benét’s work was more widely read than that of “Robert Frost, T.S. Eliot, William Carlos Williams, or Wallace Stevens,” and that “his books sold in the tens of thousands”—this at a time when the American population was about a third of what it is now. That figure in itself is telling, both in regard to the loss of stature of poetry today and the regard with which it was held less than 100 years ago.

Griffith then adds “Since that time, his reputation has declined steeply among literary sophisticates to the point where his poetry is seldom included in college anthologies and his name is often neglected in literary histories.”

In my copy of “Literature: An Introduction to Fiction, Poetry, and Drama (Sixth Edition),” a volume nearly 1,900 pages long, I find hundreds of works by poets, writers, and playwrights, but no story or verse, or for that matter, no mention  at all of Stephen Vincent Benét.

Yet as Griffith also tells his readers, Benét’s “poems and several of his short stories remain steadily in print, finding a sizable audience among general readers year after year.”

The Continuing Relevancy to Our Times

Readers enjoy Rosemary and Stephen Benét for their depictions of famous American figures and events, but also, I suspect, because some of what they had to say speaks to the 21st century. At the end of “The Devil and Daniel Webster,” for example, Daniel Webster inquires of Mr. Scratch: “I have fought for the Union all my life. Will I see that fight won against those who would tear it apart?”

Treat yourself by reading some of the works of these two writers. Several of their books are still in print. Others can be purchased secondhand. Their poems can be found online.