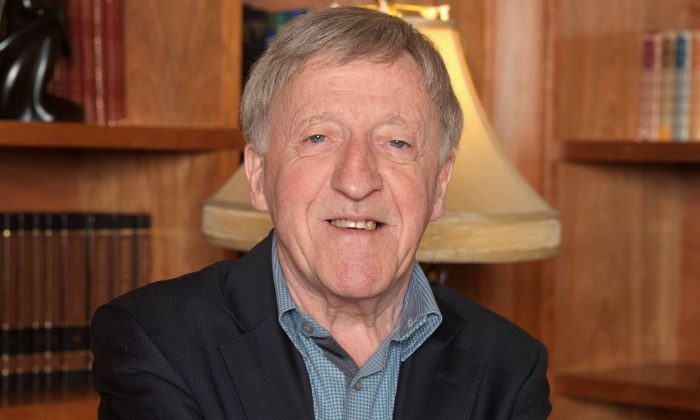 The Chieftains have been the pre-eminent Irish traditional ensemble for more than 50 years. The leader of the group, Paddy Moloney, spoke to us to discuss the group and their upcoming concert at Town Hall.

Moloney learned from the success of The Clancy Brothers and Tommy Makem in the 1960s that there was worldwide interest in Irish music. While that group featured vocals, Moloney developed an individual sound for an ensemble that was primarily instrumental.

The Chieftains reached a larger audience after their music was featured in Stanley Kubrick’s film “Barry Lyndon.” I asked how that came about. Kubrick called and, because Moloney was in the middle of a press conference, he asked the director to call back a day or two later. Actually, Moloney had no idea who Kubrick was. When he mentioned the call to one of his acquaintances, he was told of the importance of the director.

Following a phone conversation, Moloney flew to London and spent an afternoon at Kubrick’s house. They had a fruitful afternoon and Moloney found the director to be “a very nice man.” Kubrick purchased 25 minutes of The Chieftains’ music for use in the movie. Later, Kubrick generously told Moloney that he could use excerpts of “Barry Lyndon” in The Chieftains’ advertisements.

Moloney has been quite active recently. The Chieftains performed in China before Christmas and on Dec. 30 received a tribute in Barcelona before the King of Spain, who gave Moloney a gold medal for the album “Santiago.” Next year, The Chieftains will tour Japan.

Moloney, who plays uilleann pipes and tin whistle, sings, and is a composer, raved about the artists who will appear at Town Hall. He described Matt Molloy as the “greatest flute player.” Tim Edey, whom he hailed as a “genius,” is a masterful guitarist who also tells jokes. Alyth McCormack is a singer/percussionist from the Hebrides Islands. Triona Marshall is a harp player, who “usually steals the show.” Tara Breen plays the fiddle and surprisingly the saxophone, which had not previously been used in Irish traditional music.

Moloney is excited about two Canadian brothers, who will perform at the concert: Jon Pilatzke is a fiddler/step-dancer and Nathan Pilatzke also dances. Cara Butler is in her 23rd year as the principal female dancer with The Chieftains. Moloney pointed out that Michael Flately had been with The Chieftains for seven years.

A choir will appear at the Town Hall concert and will perform pieces from the miniseries “The Irish in America: The Long Journey Home,” which featured The Chieftains on the soundtrack.

The group will commemorate the impending 100th anniversary of the 1916 Easter Rising and will pay tribute to Irish poet William Butler Yeats, who wrote the most famous poem about that event. The Chieftains will also honor another freedom fighter, South Africa’s Nelson Mandela, with a piece that Moloney wrote for a documentary about the leader.

The Chieftains will appear at Town Hall on Saturday, March 12, at 8 p.m. For tickets, go to ticketmaster.com.

Two other shows celebrating St. Patrick’s Day are Larry Kirwan (former leader of Black 47) and Friends at BB King’s on March 17 at 7 p.m. and The Narrowbacks on March 17 at Webster Hall.