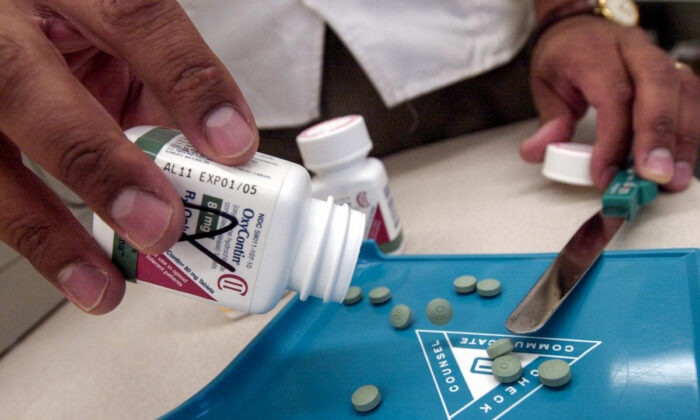 The prescription medicine OxyContin is displayed August 21, 2001 at a Walgreens drugstore in Brookline, MA. The powerful painkiller, manufactured to relieve the pain of seriously ill people, is being used by some addicts to achieve a high similar to a heroin rush. (Darren McCollester/Getty Images)
Health News

At least one-third of adults assessed for substance use at treatment centers in 2019 reported severe psychiatric problems, reveals the U.S. Centers for Disease Control and Prevention’s (CDC) most recent Morbidity and Mortality weekly report, published on June 10.

According to the report, in 2019, 65.8 million adults reported engaging in binge drinking and 35.8 million reported using illicit drugs or misusing prescription pain relievers, based on data collected during a period of 30 days. The report looked at data from 49,138 individuals in 339 treatment centers across 37 states. More than 35 percent of respondents suffered psychiatric issues, 25 percent had problems with employment, and 22.8 percent had family issues.

Individuals with substance use patterns were found to be at “elevated risk for overdose and associated harms.”

Over 32 percent of respondents admitted to polysubstance use in the past 30 days, which refers to using two or more substances. The most common polysubstance combinations among the respondents were alcohol and cannabis at 17.2 percent, followed by cannabis and illicit stimulants at 3.7 percent, then alcohol and prescription opioids at 3.4 percent.

While the latest report only focuses on data from 2019 preceding the COVID-19 outbreak, a future report is expected to analyze how the pandemic affected these trends, said the CDC.

According to the National Alliance on Mental Illness (NAMI), the combination of substance abuse and mental illness falls under the classification of dual diagnosis or co-occurring diseases. Around 9.5 million adults in the United States suffered from both conditions in 2019 as per the National Survey on Drug Use and Health.

Speaking to WebMD, Monty Ghosh, MD, addiction specialist at the University of Alberta Hospital in Edmonton, says that there is a “significant overlap” between substance misuse and mental health, with more than 80 percent of individuals “having both.”