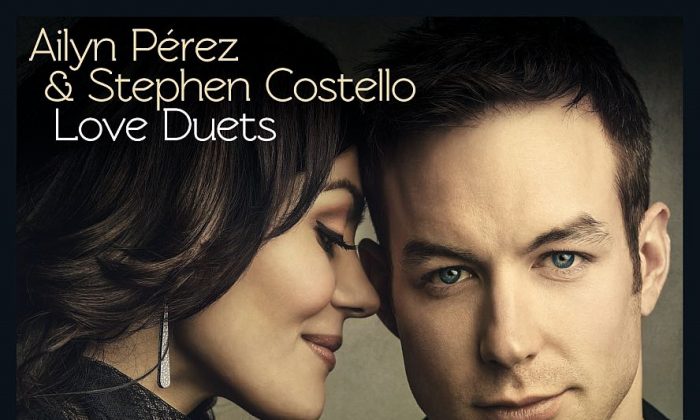 The new album “Love Duets” (on Warner Classics) is not one of those combinations put together by a record company. The two American singers, soprano Ailyn Pérez and tenor Stephen Costello, are in fact married.

They are both winners of the Richard Tucker Award (Pérez 2012, Costello 2009), and their acting and good looks receive as many favorable notices as their singing.

The rising stars are on the cover of the latest issue of Opera Now magazine. This past month, they have been appearing at Covent Garden as the ill-fated lovers in Verdi’s “La Traviata.” The selection from this opera, and all of the operatic duets on the CD, are from works that the couple has performed on stage.

Though the duets involve love, the mood varies greatly and so do the emotions. In “Toi! Vous!…N’est-ce plus ma main” from Massenet’s “Manon,” Des Grieux has left Manon to become a priest and, in the fiery duet, his former lover tries to convince him to violate his vow of celibacy and live with her again.

This duet is followed by one of the loveliest ones in opera, “The Cherry Duet” from Mascagni’s “L’amico Fritz.” Here, a bachelor falls in love with a young woman while they are picking cherries. While the duet is popular, the entire opera is rarely presented.

It’s noteworthy that Pérez and Costello appeared in a concert performance of “L’amico Fritz” at the Tchaikovsky Hall in Moscow in 2012. (The duet is on YouTube; the sound quality of the CD version is far superior.)

In Verdi’s “Rigoletto,” Costello is the rakish Duke of Mantua, who disguises himself as a poor student to win the affections of the hunchbacked court jester’s sheltered daughter, Gilda.

Comic relief comes with “Caro Elisir…Esulti pur la Barbara” from Donizetti’s “L’Elisir d’amor.” Pérez and Costello sing with panache and comic flair. (A YouTube version from the Richard Tucker Gala in 2013 shows that aside from beautiful singing, even in a concert performance, they are very funny.)

“Un di felice” is the duet from “La Traviata” in which the young man expresses his love but the woman has doubts. The title of the duet is supposedly engraved on Pérez and Costello’s wedding rings, and this is a part for which Pérez has been lavishly praised.

If the man’s father is an obstacle to the lovers in “La Traviata,” Faust and Marguerite in Gounod’s opera have a more formidable troublemaker: Mephistopheles. They sing the duet “Il se fait tard.” Again, the singers’ French style is as idiomatic as their Italian.

The couple’s voices blend flawlessly on perhaps the most romantic duet in opera, “O soave fanciulla,” from Puccini’s “La Bohème.”

A special treat is offered at the end—the pair sings four show tunes: “One Hand, One Heart” from Bernstein and Sondheim’s “West Side Story,” “If I Loved You” from Rodgers and Hammerstein’s “Carousel,” “I’ll Know” from Loesser’s “Guys and Dolls,” and “And This Is My Beloved” from “Kismet.” (I take issue with the liner notes listing the songwriters as Wright and Forrest. They wrote the words; the music is by Borodin.)

Pérez and Costello don’t make the mistake that many opera singers commit of overwhelming the material. These performances have the same integrity as the opera duets. I would be perfectly happy if they made an entire album of show tunes. Incidentally, the accompaniment by the BBC Symphony Orchestra under Patrick Summers is exemplary throughout.

Costello will be appearing on June 5 at Carnegie Hall in a concert version of Donizetti’s “Roberto Devereux” with Eve Queler and the Opera Orchestra of New York. He will appear at the Metropolitan Opera in December in “La Traviata” with Marina Rebeka.

Pérez will play Micaela in “Carmen” at the Met next February and March. If you want to see the couple together in “La Traviata,” go to the San Francisco Opera in July.