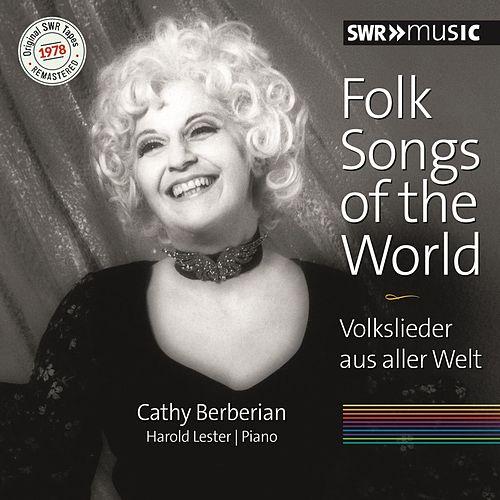 American mezzo-soprano Cathy Berberian (1925–1983) was a one-of-a-kind singer. On one hand, she was associated with modern music and contemporary composers wrote works for her, including Luciano Berio (to whom she was married from 1950 to 1966), John Cage, Igor Stravinsky, Darius Milhaud, and William Walton. At the same time, she collaborated with Nikolaus Harnoncourt in his groundbreaking recordings of 17th century operas by Monteverdi.

Berberian’s interests were remarkably diverse. She went to New York University and Columbia University and studied dance, acting, diction, pantomime, opera, literature, and costume design. Based in Italy during most of her career, she, in addition to concertizing, worked with Umberto Eco in translating Jules Feiffer’s cartoons into Italian.

Cathy Berberian sings in 16 languages, and she adopts the style of each.

SWR Music has now issued a delightful CD of Berberian, distributed by Naxos, titled “Folk Songs of the World.”

This recording should not be confused with “Folk Songs,” a song cycle by the Italian composer Luciano Berio composed in 1964 for Berberian, in which she is accompanied by nine instruments. Her extraordinary range is conveyed by the fact that when Berio conducted “Folk Songs” at a 1994 memorial concert to her at La Scala, he had to employ different singers because no single vocalist could handle all of the songs adequately.

On “Folk Songs of the World,” recorded in 1978, the singer is skillfully accompanied by her longtime pianist Harold Lester.

She sings in 16 languages, and she adopts the style of each of the countries to such an extent that it’s hard to tell that you are listening to the same artist. Just comparing the English-language pieces conveys her wit. For example, in “I Bought Me a Cat” (arranged by Aaron Copland), she reproduces animal sounds.

In “Oh No, John,” she sounds like a proper English lady and her suitor. Her humor again comes to the fore in the Chinese song “Of What Use Is a Girl” (sung in English). Another Chinese folk song is performed in the original language.

When singing a Swiss song, she yodels, while “Roumania, Roumania” would fit in at a Jewish wedding. Some of the folk songs were arranged by Beethoven, Haydn, and Bartok and there are art songs by Brazilian composer Villa-Lobos, all showing that she could produce beautiful renditions of classical music when she chose.

Her tempestuous rendition of the Spanish “El Vito” (arranged by Obradors) suggests that she would have been an exciting Carmen if she had been more interested in opera.  She ends the recital with an acknowledgement of her own heritage: “Im Yerki,” a setting of a text by Armenian national poet Hovhannes Tumanyan by composer Kurken Alemshah.

Honoring the Women of Jazz

Others have made similar recordings of songs from around the world, but none, to my knowledge, displays such a range of colorings and styles.

The remastering of the recording is excellent and the liner notes by Eva Pinter are informative. My only complaint is that SWR should have included translations of the songs.