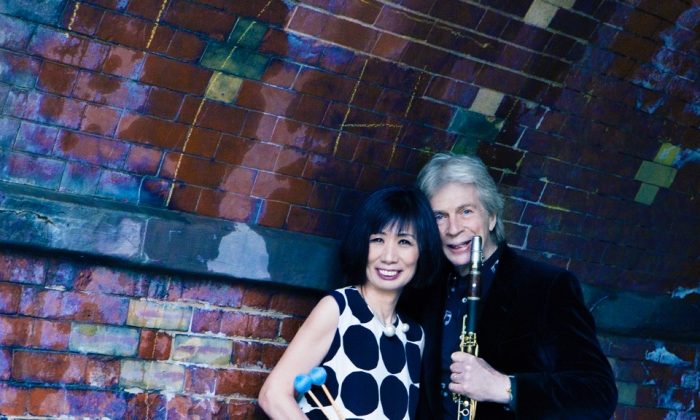 “Duo Cantando” (released through the Savoy Label Group) is a new recording by the husband and wife team of Mika Stoltzman and Richard Stoltzman.

Richard Stoltzman is one of the most celebrated clarinet players in the world. A two-time Grammy winner, he gave the first clarinet recitals at both the Hollywood Bowl and Carnegie Hall, and in 1986 became the first wind player to receive the Avery Fisher Prize. He was a founding member of the chamber quartet Tashi in 1973 and has performed as soloist with more than 100 orchestras. He has commissioned works from leading composers and also plays jazz and world music.

Mika Stoltzman is a world class marimba player. Born in Japan, she has also performed in major concert halls around the world, including a number of performances at Carnegie Hall as well as at jazz festivals. Like her husband, she is equally at home in classical music and jazz. In fact, she has studied with noted jazz vibes player, Mike Mainieri.

The new album is produced by Steve Epstein, who just won a Grammy this year for the cast album of “Hello Dolly.”

The first track on the CD is the melancholy and haunting “Waltz Cantando” by Bill Douglas. He is a Canadian bassoon player and composer, who was a classmate of Richard’s at Yale School of Music. They have toured intermittently together for over 30 years.

The sprightly “Diamond Dance,” another composition by Douglas, has the feel of an Irish folk song.

The Stoltzmans are joined on “Sea Journey” by the composer, Chick Corea, on piano.

Corea’s “Concerto #1, Part III was written for a piano soloist and orchestra. Mika gives a virtuoso performance with the marimba taking the pianist’s part. The Boston Modern Orchestra Project is conducted by Gil Rose. Richard doesn’t play on this piece.

The late composer Toru Takemitsu (1930-1996) was Japan’s leading composer. His piece, “Tsubasa” (arranged by Bob Becker for clarinet and marimba) has a nostalgic sound.

Takemitsu’s “Air” is done as a solo clarinet piece rather than flute. Stoltzman points out in the liner notes that Takemitsu was in the audience when the French composer Oliver Messiaen was coaching Tashi in performing one of his works. In “Air,” Takemitsu quotes from Messiaen and both composers sought to convey ecstasy, “even [in the] silence (rest) between notes ….”  This use of silence is said to have originated in Hogaku (traditional Japanese sound).

William Thomas McKinley (1938-2015) was an American composer and jazz pianist, who was also close to Richard. They were classmates at Yale School of Music’s graduate school. When McKinley died, Richard wrote, “for 50 years, [he was] the most powerful, universal force for music in my life.” “Mostly Blues (excerpts from 22 Movements”) was written especially for Richard and Mika and it fits her request “to have a groove.”

“The Nymphs” is a solo piece that John Zorn penned for his 2013 “Mysteries” album. It is performed here as a marimba solo and Zorn coached her in how to perform it.  The work gains velocity as it goes along and the last section is truly spellbinding.

The closing track, “Double Concertina” is by Japanese composer Michiru Oshima (who was Mika’s roommate when she lived in New York). Oshima is best known for her film scores and “Double Concertina” could easily be used for a romantic movie. This is the lushest music on the album, performed by Richard and Mika with the Boston Modern Orchestra Project conducted by Gil Rose. Charles Dimmick is featured on violin.

Mika and Richard Stoltzman will appear at the Regatta Bar in Boston on Aug. 17 and at New York’s Zankel Hall on Nov. 7.