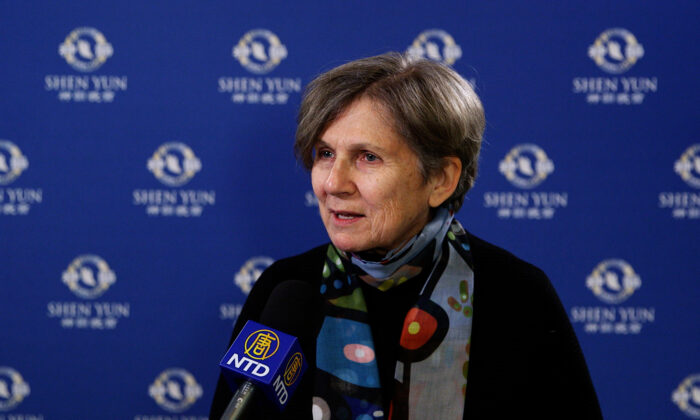 Estelle Lamoureux, Chair of Education for the Canadian Commission for UNESCO and for the Manitoba Association for Rights and Liberties, attended Shen Yun Performing Arts at the Centennial Concert Hall in Winnipeg, Manitoba, on March 4, 2020. (NTDTV)

WINNIPEG, Canada—Kindness and human rights are what many around the world admire about Canadian culture. So it’s fitting that Manitoba resident Estelle Lamoureux not only expressed her concern for a persecuted group portrayed in Shen Yun Performing Arts, but also recognized those positive traits in traditional Chinese culture itself, which the performing arts company is working to revive.

The curtain rose for the last time this season on New York-based Shen Yun on March 4, 2020, at Winnipeg’s Centennial Concert Hall where Lamoureux and fellow audience members were whisked away to ancient Chinese villages and heavenly realms of Chinese lore. Lamoureux is the Chair of Education for the Canadian Commission for UNESCO and Chair of Education for Manitoba Association for Rights and Liberties. She has devoted herself to spreading awareness of human rights around the world after a career that included being the principal of a high school.

“[Shen Yun] is beautiful. It’s very emotional in very many ways,” Lamoureux began. “Because it’s a storytelling aspect to it that creates, as if you’re going into this on stage with the dancers. So I thought it was very moving in many ways.

“And also, I think it depicts some of the struggles that China’s currently encountering. And that, you know, there are human rights violations. And we have to be aware of that and to support the Falun Gong that are here [in Canada] and make sure that they know that they have friends in us. So I think that’s very important. So that was it was very good.”

Why Shen Yun Can’t Be Seen in China

In Shen Yun’s effort to bring back traditional Chinese culture from the brink of extinction, their artists have adopted a personal spiritual discipline in their daily lives that enhances their energy, expression, and even their stage presence, they say. It’s known as Falun Dafa (or Falun Gong) and it’s an ancient style of meditation that teaches truthfulness, compassion, and tolerance.

Unfortunately, it is severely persecuted in China today by the Chinese Communist Party (CCP) which views its free-thinking and return to moral values as a threat to its own official atheism as well as to its legitimacy and power. In Shen Yun’s roughly 20 vignettes per production, some storytelling dances depict the ongoing persecution of Falun Dafa practitioners and the compassion they exhibit despite the brutality.

Despite the real-life drama between good and evil unfolding, audiences overwhelmingly say that Shen Yun‘s performance is uplifting and hopeful, an observation that Lamoureux herself made. She also commented on the way that Shen Yun’s artistic director chose colors in order to invoke beauty and happiness.

“Well, I think [Shen Yun] is just a joy. There’s a lot of joy in it, and a lot of color. And color … brings emotion. And the choice of color with the green, the pinks, the orange, the whites, brings joy. So I think in that way, it was uplifting. So in that way, it’s emotional. I think it was beautifully done,” she said.

Shen Yun ‘Brings Back the Beauty’

China’s 5,000 years of civilization was a profoundly spiritual one, filled with a variety of spiritual disciplines and acknowledgment of a Creator who will one day return to earth for all mankind. Lamoureux enjoyed the journey through the culture that Shen Yun provided and wished it would have lasted longer.

Shen Yun, she said, made it clear why their performance can’t be seen in China today: The CCP seeks to wipe out traditional Chinese culture, while Shen Yun “brings back the beauty and the caring and the emotional aspect of the ancient traditional dance of China. So it’s beautiful,” she said.

Overall, Lamoureux enjoyed the spiritual content in the performance and thought the belief in the connection between heaven and mankind was well developed. “It was very visual, because [Shen Yun has] definitely incorporated that of the divine spirituality of it through imagery and through the incredible graphics that [they] have,” she said. ” That was beautiful …  part of the whole production—it was very well done.”

“When we were walking out, we said we felt as if we could leap out of our seats! And then we realized we couldn’t, because we’re not trained. But we felt very energized by [Shen Yun’s performance]. It was very good,” she added.

Lamoureux, an educator of human rights, pointed out a few lessons that she said she’ll take away from the night’s performance.

“It just brings us a different understanding of where [different cultures] come from. So I think it … increases inclusivity. So I think that’s the important part of it,” she said.

“To be open to different cultures, to be accepting. And to understand, some journeys are very different from other journeys, and that we should be very open and accepting of everyone,” she said.