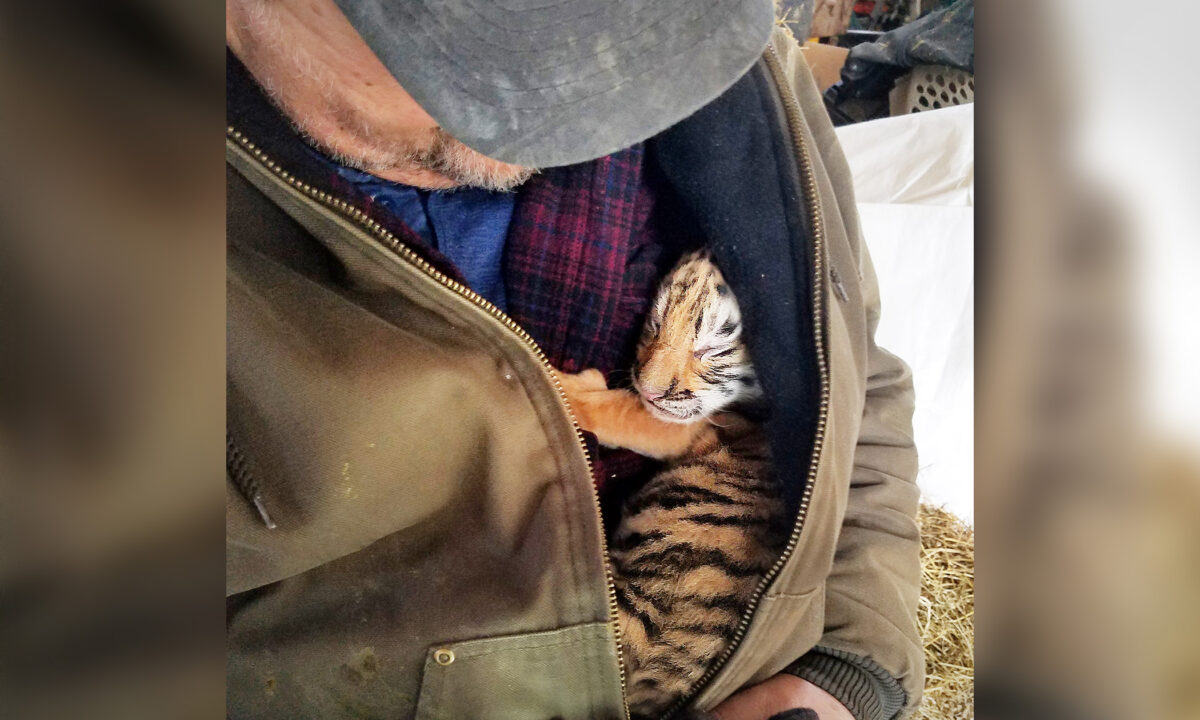 A team of wildcat sanctuary workers drove down a windy, wooded dirt road in Indiana to a small, out-of-the-way animal breeding facility where they fully expected to find a pair of lions and two tigers in need of a good home.

They never expected to find a tiger cub.

The site was USDA licensed but far from ideal for the cats, with just a muddy grounds for the tigers to dwell, and a space of concrete and dirt for the lions.

“I wouldn’t say they were abused, but there is a much better life ahead of them,” Thies told Fox19. “We knew that they were breeding and selling cubs online to other roadside zoos, even to cub petting operations, so we were very thankful that they made the right decision.”

The primary caregiver at the facility had died, and next of kin made the sensible decision to call The Wildcat Sanctuary, in Minnesota, to ensure the big cats got the best life possible.

Tammy Thies, from the sanctuary, and her team arrived in November 2020 with the goal of extracting the lions, Wally and Marlene, and the tigers, Marcus and Winona, to bring them to Wildcat.

It wouldn’t be easy, though; the property was difficult to access, as the single-lane, narrow dirt road couldn’t accommodate their trailer. They had to tranquilize each animal individually and shuttle them to their crate one by one.

Upon greeting the tigress Winona, to the care worker’s amazement, they saw tucked next to her the baby, whom they named Dash.

“There was a cub! About three hours old with umbilical cord still attached,” Thies told the station. “I don’t think I’ve ever dropped to my knees, but I did.”

Unfortunately, Dash had to be separated from his mom; Winona was in fight or flight mode from the recent stress plus having to protect him from Marcus, who had killed offspring in the past.

Amidst the rescue effort, she was not in a suitable state to be a mom for the cub.

So, the rescuers would be charged with ensuring Dash’s healthy development. In his early stages, they would hold and cuddle him like a mom, but, as he grew larger, they’d encourage him to seek his independence and become the apex predator he is by nature.

“Some really scary times in the beginning to have such a fragile being completely dependent on our care,” Thies said. “He is doing great. He’s rambunctious. He is training to be an apex predator tiger, exactly what we like to see.”

After a couple weeks in their care, Dash was crouching stealthily and trying to figure out the best way to tear his toys limb from limb, like a bit of prey.

Gradually, they began to introduce Dash to the outdoors and to other felines his size (albeit of different species) who would teach or demonstrate to him how to act like a cat.

Meanwhile, the four other adult big cats are now at home at the sanctuary. Marcus required the most medical help, having suffered a puncture wound in his mouth and having 15 of his 30 teeth either cracked or with root pulp exposed, requiring cat root canals.

As the months passed, Dash far outgrew his tiny toys and became the healthy young tiger cub he is today, who loves playing in the snow, scratching logs just like wild tigers, and interacting with the enrichment provided by the sanctuary.

Nearing the one-year mark in October (which he has since exceeded), Dash was featured in a couple of photos, which the sanctuary posted on their Facebook page to show how far he’s come. They captioned:

“Rescued tiger Dash says, ‘THANK YOU!’ for making his compassionate Wild-At-Heart life possible. Look at how far he’s come thanks to all of YOU being there for him

“Dash has an amazing life ahead of him.” 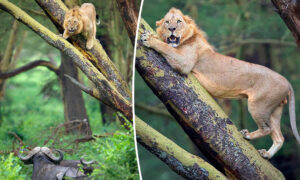 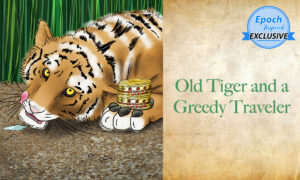 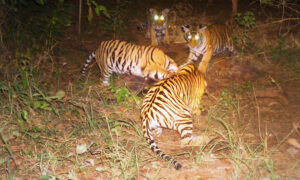 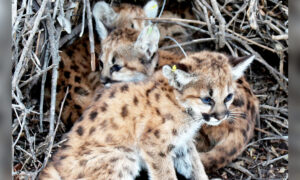