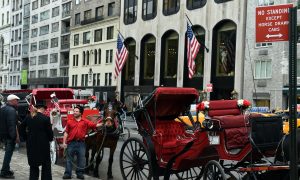 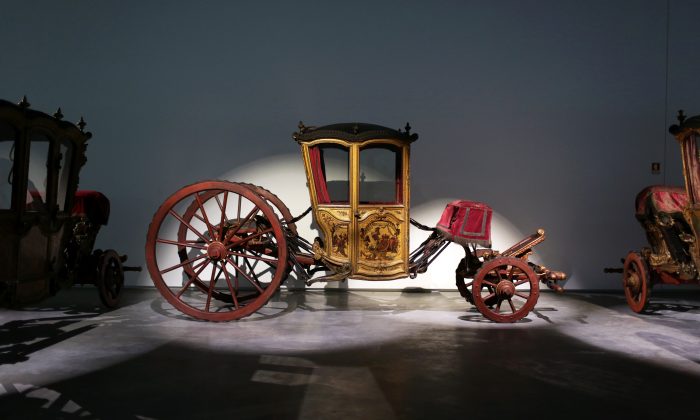 In this May 14, 2015 photo, an 18th Century coupe coach, ordered by Portuguese King Joao V for his sons, is displayed at the new building of the National Coach Museum in Lisbon. (AP Photo/Armando Franca)
Destinations

Carriages That Carried Kings Get 21st-Century Home in Lisbon

LISBON, Portugal—One of Lisbon’s most popular tourist attractions has a new home for its 110th birthday. But what’s on display inside has been turning heads for centuries.

The National Coach Museum, which offers a glimpse of the fabulous wealth Portugal possessed during the days of empire, has moved out of the ornate 18th-century horse-riding arena it long called home.

Why spend a couple of hours inside a coach museum in a city as seductive as Lisbon? Because, says secretary of state for culture Jorge Barreto Xavier, its celebrated collection of horse-drawn carriages, coaches and cabriolets from between the 16th and 19th centuries can’t be found anywhere else.

It is “the best and biggest collection of royal coaches in the world,” Barreto Xavier told the AP. The exhibits are also in excellent condition.

The oldest coach on display is one that Philip III of Spain used on his visit to Portugal in 1619.

But the show-stealer is the Coach of the Oceans. Around 8 meters (26 feet) long and close to 3 meters (10 feet) high, it has Baroque wooden carvings of human figures and cherubs, set off in gold leaf. It is upholstered in red velvet and golden silk.

It is ostentatious for a reason. It was part of a Portuguese envoy’s cortege of 15 coaches sent by King Joao V to visit Pope Clement XI in 1716. The procession through the streets of Rome turned eyes and set tongues wagging—and was part of the monarch’s attempt to project Portuguese power.

Silvana Bessone, the museum director, says that such “works of art have no price tag … they are so valuable they have no price.”

The museum’s site beside the River Tagus was the ground zero of Portugal’s imperial ambitions. It lies near where Portuguese explorers like Vasco da Gama set off on daring voyages in the 15th and 16th centuries, bringing back fantastic riches from imperial outposts in Africa, Asia, and South America. Lisbon was one of the wealthiest cities in the world.

This riverside district, called Belem (Bethlehem), is Portugal’s most popular tourist draw. As well as the coach museum it includes the imposing Jeronimos church and monastery and the Tower of Belem, both from the 16th century. More recently, the area has added the Berardo Museum of Modern and Contemporary Art, featuring works by Picasso, Andy Warhol, Man Ray, and many more.

Up to 2 million tourists a year head to Belem. The government hopes that the new coach museum will help push that up to 3 million.

Portugal, a country of 10.5 million people, would certainly welcome the bigger numbers. It needed an emergency loan of 78 billion euros ($87 billion) in 2011 when it almost went bankrupt amid the debt crisis that engulfed countries using the euro currency. Work on the new coach museum building was completed in 2012, but the government couldn’t afford to open it.

These modern troubles stand in pronounced contrast to the country’s long-ago prosperity.

Portuguese royals, like other European monarchs, traveled in grand style and their coaches—like today’s luxury cars—were a status symbol.

The museum’s only rival, Bessone said in an interview, is a collection at the Kremlin in Moscow, but it’s not on display.

Whereas wars and revolutions spelled the end of many European monarchs’s riches, including their carriages, Portugal’s royalty was relatively unscathed. When Queen Amelia happened across several dozen of her coaches gathering dust in a disused equestrian arena, she was able to clean up 29 of them for a display in 1905.

She lost her pet project five years later, however, when her husband King Carlos I was assassinated and Portugal became a republic. Even so, the museum’s collection grew because the government sent the coaches of the monarchy-supporting Catholic clergy there, too.

The original museum venue—though pretty, with painted ceilings and graceful stone balconies—was cramped. In recent weeks, the exhibits have been wrapped in plastic and taken, one by one, 100 meters (yards) to their new home.

Covering 16,000 square meters (172,000 square feet), the new site allows the museum to almost triple its exhibition area and double the number of exhibits to 70, with another eight staying at the old site.

Bessone, the director, likens the old premises to a jewel box where visitors had to rummage around. At the new installations, “the jewels are in the shop window,” she says.