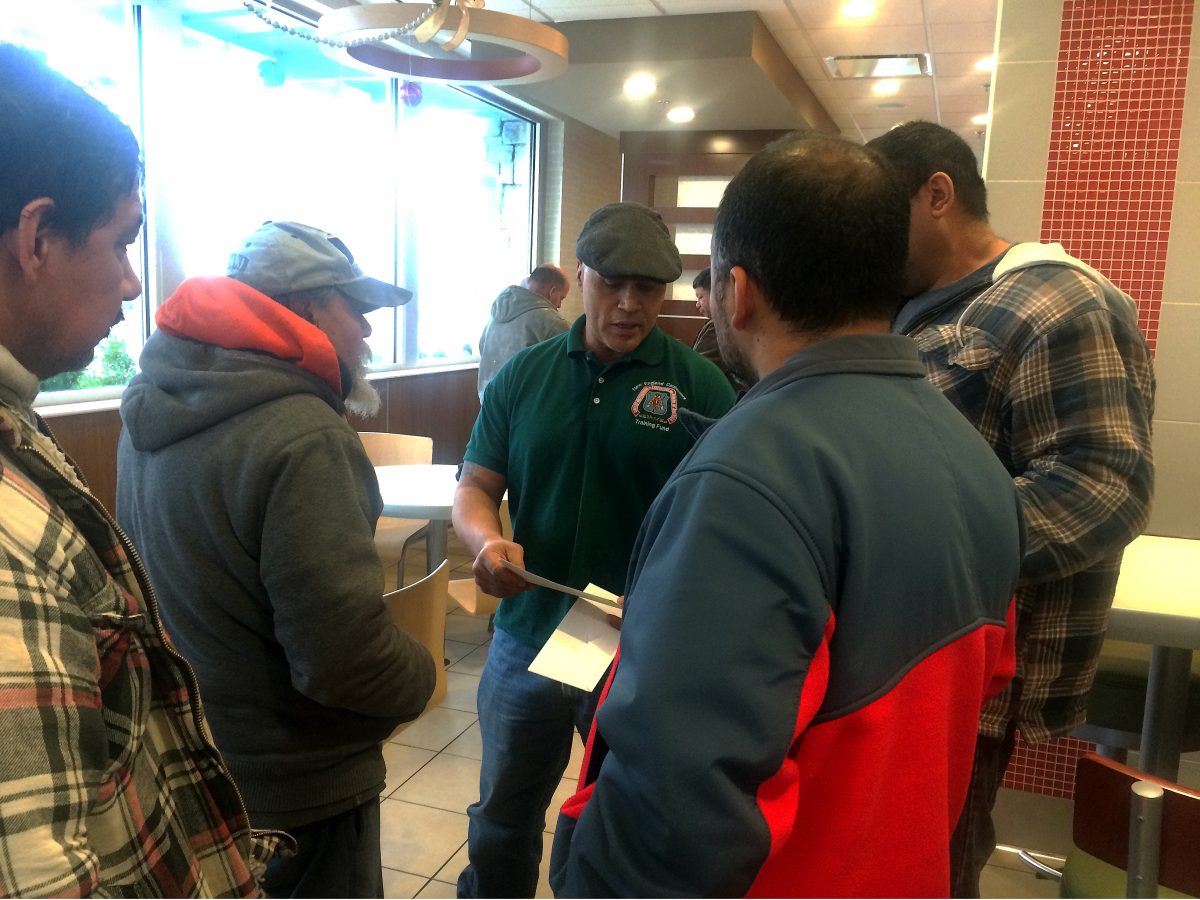 Manny Gines (2nd R), organizer for the New England Regional Council of Carpenters, speaks with three carpenters who recently received overdue wages after filing a complaint with the Attorney General’s office, at a McDonald’s in Boston, Mass., on Dec. 19, 2014. (Phoebe Ryles/Epoch Times)
People

BOSTON—Three carpenters in Boston received long overdue wages just in time for Christmas. Two of the men, who do not have documents to work in the country, support children with their wages.

The men were working on an affordable housing development in the Brighton neighborhood of Boston when over a month ago, their checks stopped coming.

Manny Gines, a business agent and organizer for the union New England Regional Council of Carpenters (NERCC), was instrumental in helping the men secure their wages. It happened at a meeting held at a McDonald’s restaurant.

“This is a very happy ending for the workers. We are a couple of days before Christmas, and these guys didn’t have nothing. They are working now, but God knows if they are going to get paid there,” Gines said.

The outcome is a positive one but the checks in their hands don’t tell the whole story.

The chain of command on a construction site can be complicated. Usually the owner chooses a developer who in turn hires a general contractor (GC) to manage the construction. These days many GC’s are actually construction management companies because they don’t hire any workers to do any actual building. Instead, they hire supervisors to oversee the work, and subcontractors to do the work.

After two weeks without pay, the three carpenters, with the help of Gines, filed wage complaint forms with the attorney general’s office.

The carpenters don’t belong to any union. They are Spanish speaking and two of them do not have papers to work in the United States. They are representative of a population that is high risk for wage theft, meaning they work, but they never get paid.

“Wage theft is literally an epidemic that is happening in the United States,” said Gines.

The three carpenters, who asked that their names be withheld, worked for Gypsum Inc., installing drywall in townhouses marked for affordable housing in a city with some of the highest rents and home prices in the country.

Boston’s real estate market is strong and with the population growing, Mayor Martin J. Walsh recently announced a plan to build 53,000 housing units by 2030; 6,500 of them with affordable rents.

“Boston is growing, and I am committed to making sure that the prosperity Boston is enjoying reaches every neighborhood and every Boston resident,” Walsh said in a press release announcing the plan in October.

To achieve this goal the city sought proposals from developers, like the one put forth by The Community Builders Inc., to build townhouses which will go up for sale at state determined affordable prices. This is where the three carpenters were working when the paychecks stopped coming.

Community Builders is a large, nonprofit development corporation operating nationwide. The company’s mission is to “build and sustain strong communities where people of all incomes can achieve their full potential,” according to its website.

The company just completed the Charlesview Residences, with 240 affordable rental units that opened in July 2013. It is currently building the townhouses right next door.

The Charlesview Residences were built by John Moriarty & Associates, a GC that uses a union workforce, which guarantees transparency and good wages. For the townhouses, Community Builders chose a nonunion general contractor, North East Interiors, a company with a long history of safety and wage violations.

In Boston, almost 85 percent of commercial developments use union labor. Cost concerns are the most common reason that developers use nonunion contractors, where bids can be as much as 30 percent lower than union contractor bids.

The savings often mean that owners need to turn a blind eye to the tax fraud, wage theft, and employee misclassification that hide behind the reduced costs. This bundle of illegal labor practices is often referred to as the underground economy. A recent report by McClatchy DC concluded that these practices are widespread and on the rise.

This puts nonprofits like Community Builders in a tough situation. “The question is are they building affordable housing or are they creating tenants for it,” Gines said.

North East Interiors has a long history of choosing illegitimate subcontractors. A 2008 report compiled by the New England Carpenters Labor Management Program details abuses dating back to 2005. One subcontractor sued North East Interiors for not maintaining a safe worksite after a worker fell 46 feet. Another subcontractor was investigated by the FBI for money laundering. Wage theft, employee misclassification, and unsafe work sites appear to be the norm, according to the report.

The layers of subcontractors can serve to insulate North East Interiors from responsibility for what happens on their jobs. In this case North East Interiors subcontracted with Int-Ex for the drywall and framing portion of the job, Int-Ex hired Gypsum Inc., to do it, and Gypsum hired a handful of workers, in the country without legal permission, to do the work at substandard wages.

Wage theft is literally an epidemic that is happening in the United States.
— Manny Gines, The New England Regional Council of Carpenters

For three months the carpenters hung drywall 48 or 52 hours a week. They earned $18 per hour, well below the area standard wage of $38 for carpenters. They were not paid legally mandated overtime when they worked over 40 hours per week. Gypsum paid them with checks that had no taxes or Social Security withheld.

In mid-November, the job started to wind down, and Gypsum stopped paying them all together.

When Gypsum said they didn’t have any money they were probably telling the truth. Raul Miranda, field supervisor for Gypsum, blames Int-Ex. He said he could not pay the carpenters because Int-Ex had not paid him since late October.

Miranda said the reason that they were behind schedule was because the workers “showed up late, or even drunk.”

Gines said that blaming the workers is common but not a valid excuse. “I was a foreman for a drywall company in the union. If they send me a guy, within two hours I know if he is good or not. If I don’t think he is good, I give him his check and I send him home. These guys leave them working for them for two or three months and then they say, ‘Oh he’s no good,'” he said.

“Most of the workers walk away and don’t even know that they have rights. It doesn’t matter if your legal or illegal, when it comes to labor rights, they cover you,” Gines said.

Gypsum is what Gines calls a “suitcase contractor,” and the carpenters call “Jefes” from the Spanish word for boss. It means a small company, sometimes just one guy.

Miranda’s business card from Gypsum boasts a gmail address and an office in a two-story brick house in Lowell, Mass. He started work for Int-Ex without a contract, so the expectations were undefined at best. He had nothing to fall back on when Int-Ex refused to pay.

Most of the workers walk away and don’t even know that they have rights.
— Manny Gines, The New England Regional Council of Carpenters

After the McDonald’s meeting to address the workers’ wage concerns, a project manager from Int-Ex said that he was satisfied with the outcome and felt that the issues had been resolved because everyone present was honest and open to a positive outcome.

He had just handed Miranda a check for a portion of the $12,000 Gypsum said it were owed. Miranda then issued checks to the three carpenters.

A representative from North East Interiors present at the meeting declined to comment.

This is a very happy ending for the workers.
— Manny Gines, The New England Regional Council of Carpenters

Community Builders responded to inquiries with the following statement:

“The Community Builders, Inc. (TCB) is a responsible owner, developer, and manager. We do our best, in matters we control, to ensure the use of ethical practices at all of our sites.

When notified by Carpenters Local 40 that several drywallers alleged they were owed back wages, we reached out to the general contractor, NEI, who took charge of following up with the subcontractor Int-Ex and their subcontractor, Gypsum Inc. TCB requested evidence of payment to date. We understand that, based on our inquiry, the workers were paid appropriately. They received their checks on Friday, December 19, 2014.”

Receiving their checks was a happy ending for the three carpenters. What they were paid on Dec. 19 does not represent everything they were owed, but they were happy to get paid at all.

“With this money we are all squared up with them, and even if they rip us off a couple hundred or $500 or whatever, it is all wiped out, it’s a new page,” one carpenter said.

He held a check for $750 for a week and a half of work. According to the carpenter, Gypsum owed him $1,000, and one month ago he agreed to take less because they promised to pay him soon and he was two months behind on his rent.

Gines was not surprised that the carpenters were willing to settle for less. Low expectations are a product of their past experiences.

“It is very common, in these companies, that they rob us. It’s crazy, but they don’t pay,” another carpenter said in Spanish.