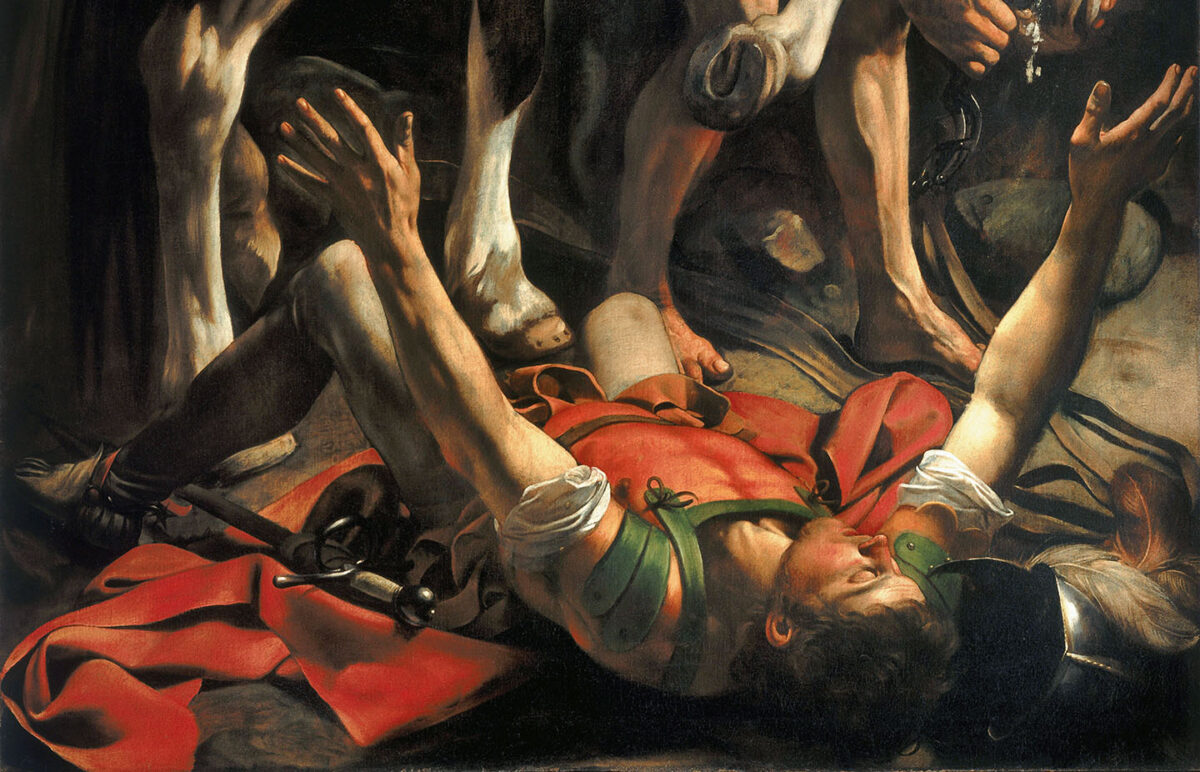 Detail of the "Conversion on the Way to Damascus," circa 1600–1601, by Caravaggio. Santa Maria del Popolo, Rome. (Public Domain)
Arts & Tradition

Caravaggio and the Conversion of Saul

Every civilization loves the new year, a celebration of renewal. In the West, people make resolutions for self-improvement, embark on a “dry January,” or try new diets and exercise programs to reinvent themselves. These are signs of hope, a belief that the next year may be even better or, more importantly, that despite the omnipresent discouragement and despair, human beings can improve.

Interestingly, the Catholic Church closes the month of January with a commemoration of the greatest self-improvement story of Scripture, the conversion of Saul.

A Painting for the Jubilee

The conversion of Saul is a perennial favorite in the history of art: painted, sculpted, and reenacted in every medium. One of the most powerful renditions of the subject was painted by Caravaggio in 1600 for the Roman church of Santa Maria del Popolo.

Commissioned by Tiberio Cerasi, the powerful treasurer-general for Pope Clement VIII, the canvas was placed in the first church that religious pilgrims would see when entering through the northern gate of Rome. The year 1600 was a Jubilee year in Rome, and those who visited the Eternal City would receive special graces. Over a million people made the journey, often on foot, looking for redemption and renewal, and they were greeted with Caravaggio’s vision of the most exciting existential reboot in history.

From Saul to Paul

According to the Acts of the Apostles (and St. Paul himself), things did not begin well. Saul was a Jewish man from Tarsus (in today’s Turkey) whose first appearance in the Bible comes as he stands by while the Sanhedrin stone St. Stephen to death. As both a Roman citizen and an educated Pharisee, Saul was given permission by the temple elders to imprison both men and women to destroy the fledgling Christian religion.

Heading to Damascus in pursuit of more Christians whom he deemed criminals, he encountered Christ, who called out to him asking, “Saul, Saul, why do you persecute me?” The shock of the encounter was so great that he was blinded and could neither eat nor drink, but he arose a new man: Paul, Apostle to the Gentiles. His letters would ultimately constitute almost a third of the New Testament. He would traverse over 10,000 miles bringing a message of hope and salvation to a cynical empire before meeting his martyrdom in Rome by beheading.

For Caravaggio, this commission was a chance to reinvent himself artistically. He had come to Rome from Milan 10 years earlier, but since he had never learned the fresco technique made famous by Michelangelo and Raphael and had never mastered drawing as had these two giants, he seemed destined to a career as a studio hand to produce paintings of fruit, flowers, and domestic canvases that would never propel him to glory. Cerasi contacted the Milanese painter while he was still working on his first public commission for the Church of St. Louis of the French. With the additional commissioned project that was poised to debut in the same year, Caravaggio’s big break had finally come.

It was a high-pressure commission. Caravaggio was to paint the “Conversion on the Way to Damascus,” and the “Crucifixion of Saint Peter” along the side walls of the chapel, but the altarpiece would be painted by Rome’s most established artist, Annibale Carracci. The expert draftsmanship and the striking colors of Carracci’s “Assumption of the Virgin” were bound to excite the discerning Roman audiences and delight the pilgrims pouring into the Eternal City.

Furthermore, the only other pairing of the subjects of Saul’s conversion and Peter’s death had been executed by Michelangelo Buonarroti 50 years earlier in the Vatican. Caravaggio’s given name was Michelangelo, so the looming comparison to his awesome homonymous predecessor must have been daunting.

The Florentine Michelangelo had packed his fresco with dozens of gyrating figures resembling shrapnel spraying from Saul’s explosive encounter with Jesus. Caravaggio chose not to emulate the older master and instead forged his own style, paring the scene down to three figures: Saul, his horse, and the animal’s minder. Saul wears a soldier’s cuirass, an old visual trope alluding to his militant intention to arrest Christians, but his horse is a staid work animal, a far cry from the sleek thoroughbreds featured in other versions.

For his part, the shabby groom looks plucked from one of Rome’s more disreputable pubs. The three figures occupy all the space in the canvas, the horse receiving the lion’s share. With no brilliant sun or cerulean sky to illuminate the event, Caravaggio uses a dramatic tenebrism that he had recently revealed in his canvases at the Church of St. Louis of the French. The drama unfolds against this stark setting with one remarkable absentee: Christ.

This was unheard of. The personal call from Jesus to Saul is one of the most well-known passages in the Bible, yet Caravaggio chose to omit the most important character of the story. Looking back at Michelangelo’s version, however, one can see an evolutionary thread through the two works. Michelangelo’s Christ appears in the upper part of the fresco, soaring above the recumbent Saul while casting down a ray of light like a bolt of lightning. The steed bolts, soldiers retreat in alarm, and one tries to fend off the divine onslaught with his shield.

Caravaggio kept the powerful beam of light but omitted the figure of Christ, implying the divine presence through the radiance that bathes the face of prostrate Saul. It’s not a natural light, like the sun or moon or torch, but a supernatural light that finds its mark on Saul alone. The horse notices nothing, and neither does his minder as they both wait patiently for Saul to rise. Caravaggio offered a multifaceted meaning. The apparition of Christ is described as “the Light” to “enlightenment” or the sense of passing to a higher plane of understanding. Even “seeing the light” can be interpreted as the realization of one’s errors and the discovery of a new path forward.

Caravaggio depicted Saul as a young man with many serious mistakes behind him but with years of evangelizing ahead of him, as he is shown with his arms outstretched to embrace his new mission. Caravaggio chose not to have Saul hide his face as other artists had done. Instead, Saul transforms into Paul before the beholder’s eyes. Even Caravaggio’s use of color was unique.

At first glance, the canvas looks like a symphony of browns: the background, the horse’s dappled coat, the servant’s beige tunic. But when Caravaggio’s light strikes Saul, it ignites the scene and turns his cuirass bright orange. Saul lies on the ground against his scarlet mantle, and the color combination evokes the idea of flame. What does it mean to be called, to find meaning? How does it feel to transform into one’s best self? Caravaggio visualizes a man “on fire” with hope, love, and purpose.

In choosing to eschew multifigured, sprawling compositions, Caravaggio composed a more accessible vision of change. With no fanfare, no reeling bystanders, Caravaggio portrays the intimate moment, the personal conversion, when one hears the interior voice and embraces a new and higher path.