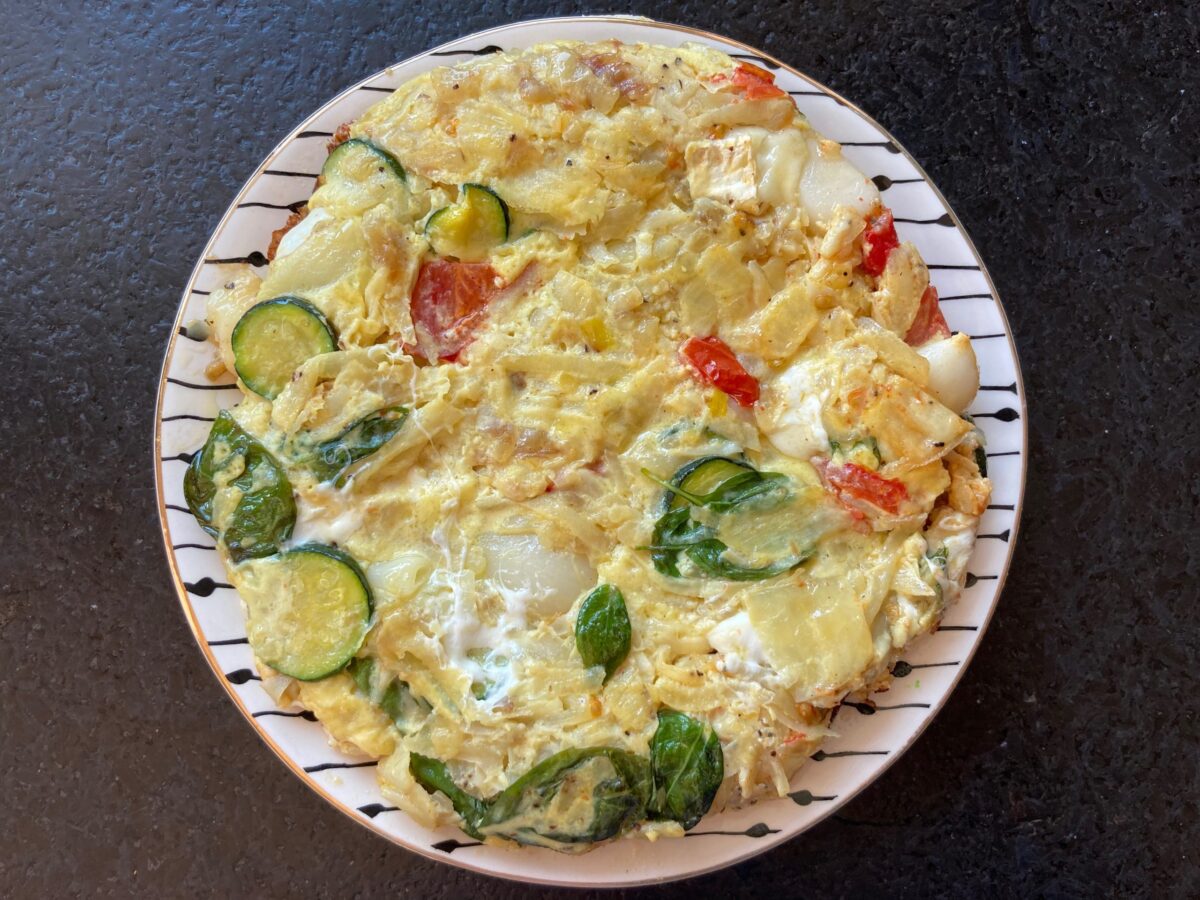 Tart tomatoes, chewy cheese, and aromatic basil give this frittata fireworks of flavor in every bite. (Ari LeVaux)
Food

\When I lived in Portland, Oregon in the late 1990s, there was a breakfast spot on Hawthorne Boulevard called Cafe Lena, where I used to go for a dish called “BBG Scrambled Eggs.”

BBG stands for Basil, Brie, and Garlic. In today’s world of hybrid recipes and fusion cuisine, most menu readers are too jaded to bat an eye at such an unexpected combination. But at the time, my belly-brain was blown. Decades later, the magic has only grown.

I now view the dish as an example of how to incorporate seasonal ingredients into my standard recipes. Garlic and cheese in a batch of scrambled eggs is a concept as old as breakfast, but it’s instructive and inspirational how a pedestrian batch of eggs can be so easily transformed and elevated to greatness.

Since I began messing around with it, BBG Scrambled Eggs has become a template for how to accommodate the revolving feast of produce that the seasons provide. I have been using variations on BBG to use my farmers market loot the way my parents once used stir-fry to clean out the fridge.

After several evolutions of the original BBG Scrambled Eggs, the recipe has evolved into a frittata, heavy on potatoes and onions. The next step was to shoehorn the components of caprese, the iconic salad of tomato, basil, and mozzarella. This shift started organically, when I was out of brie so I used mozzarella. Since the basil was already there, it only took tomatoes to complete the caprese.

This time of year, when the garlic is new, I use it as both vegetable and spice. As such, I add it twice. The first wave helps to create a baseline savory flavor for the dish. The second wave, added near the end, stays closer to raw, adding pizzazz. I began adding other vegetables, when available, including spinach, zucchini, and broccoli, as the dish had become decidedly quiche-like.

The resulting BBG Caprese Frittata is a juggernaut at the table. Each bite is an adventure, with tart tomatoes, chewy cheese, aromatic basil, and other flavors combining into fireworks. The texture is as captivating as the flavor, thanks to the mozzarella, potato, and onions browning into a delightfully chewy skin.

Enjoying this dish for the first time was such a captivating experience that I temporarily withdrew from the rest of the world. I dimly remember my son calling out to me with a question, but I didn’t want to stop chewing, even long enough to blurt out a quick reply, so I pretended not to hear him.

After making a few batches, I remembered the brie and added it back, without dropping the mozzarella. The brie, especially the rind, which I did not remove, added a distinct fungal flavor to the dish that interacts with the basil to create a musky, exotic kind of savoriness that brought me all the way back to where we started, at Cafe Lena, and washed me with feelings of nostalgia for pre-hipster Portland. After 20 odd years, the recipe had come full circle, while going somewhere else entirely.

This recipe folds recipes and ingredients of European origin into a West Coast context that’s about as far away from Europe as you can get without a boat.

Heat half of the oil on medium in a non-stick pan (either an omelet pan or a cast iron skillet). Add the potatoes and onions to the hot oil and thoroughly mix. Cover with a tight-fitting lid, which retains the moisture from the onions and steams them, along with the potatoes, into a soft mush. After about 10 minutes, add the whole garlic cloves. After another 5 minutes, add the zucchini.

If you are incorporating other vegetables, you will have to figure out when and in which order to add them so they all finish cooking at the same time as the potatoes—or if they should be added in the next step, along with the tomatoes, cheese, and basil, which we want to cook as little as possible.

When the potatoes, onions, garlic, and zucchini—and perhaps other vegetables—are done to perfection, turn off the heat and let them cool.

Meanwhile, in a large mixing bowl, beat the eggs along with the salt, and let them sit until the cooked stuff has cooled. Then, give the eggs a final beating and add the cooked items, stirring them stiffly into the eggs. Add the tomatoes, basil, grated garlic, and cubes of cheese, and gently fold them in.

Clean the pan and add the remaining 2 tablespoons oil. Turn the heat to medium, and when the pan heats up, splash some water in the oil to see if it sputters. When the water sputters, add the egg mixture and gently spread it evenly about the pan. Put the lid back on to trap as much heat as possible, and cook until you smell the bottom start to brown. Don’t wait until you smell burning.

When you smell the browning, the top will probably have begun to set up but still appear a bit pale. With a spatula, gently separate the frittata from wherever it is sticking to the pan. Ideally, at this point, you should be able to move the frittata around the pan in one piece just by shaking it.

Place a plate over the frittata, hold the pan in the other hand, and gently invert the pan, flipping the frittata onto the plate. Do so over a container positioned to catch any excess oil that might tip out in the process. Then add the oil back to the pan, and slide the inverted frittata off the plate and back into the pan, for just a minute or so to finish cooking the top surface.

Turn it off before it totally finishes, to prevent overcooking, and let it cool on the stove with the lid on.

When cool enough to work with, slide the frittata onto a plate, and serve.